Those EMPIs on that green car are sweet. So is the car. Some rare wheels, there. Reminds me of the old 510 BTW article in Car & Driver: 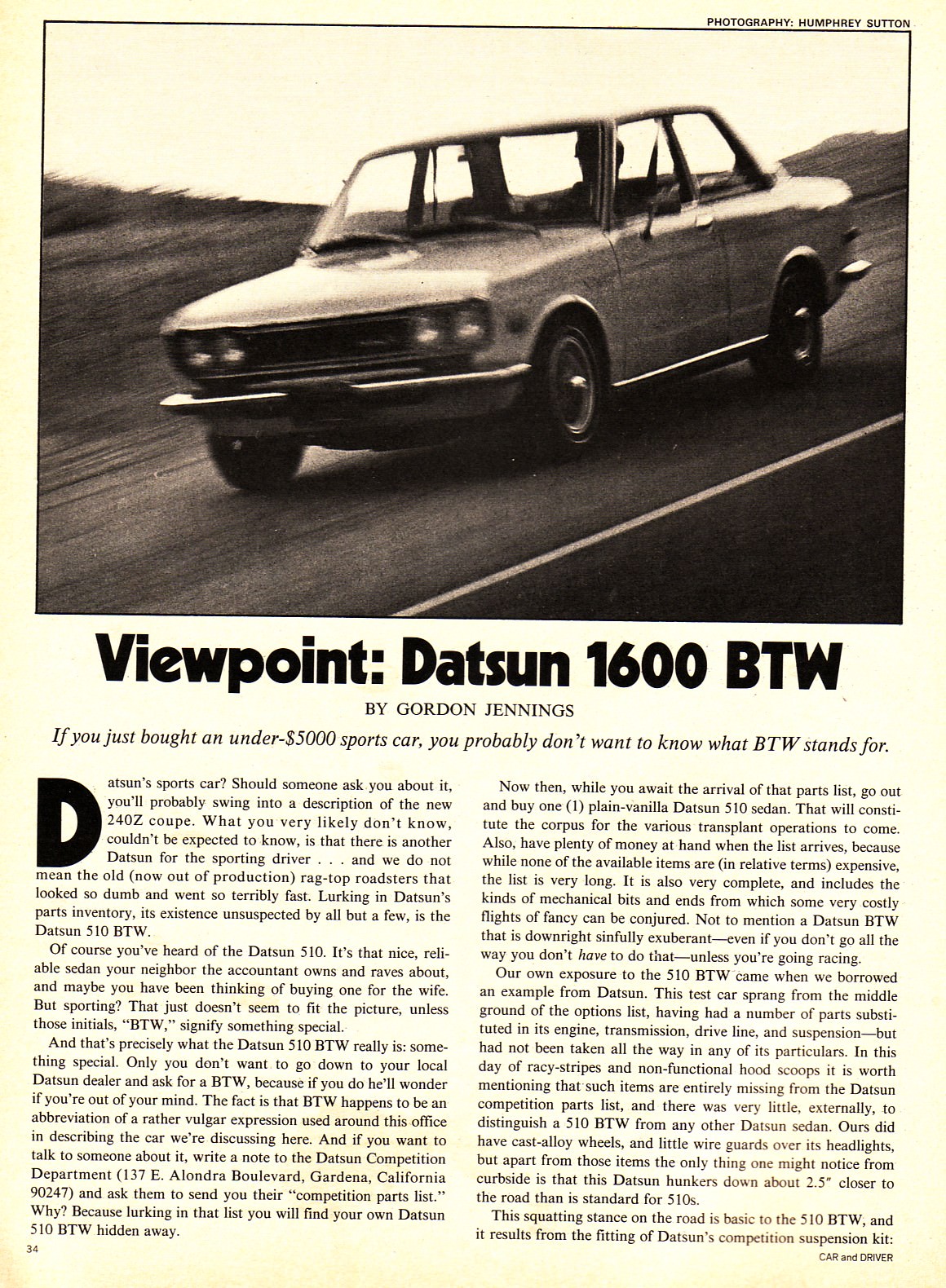 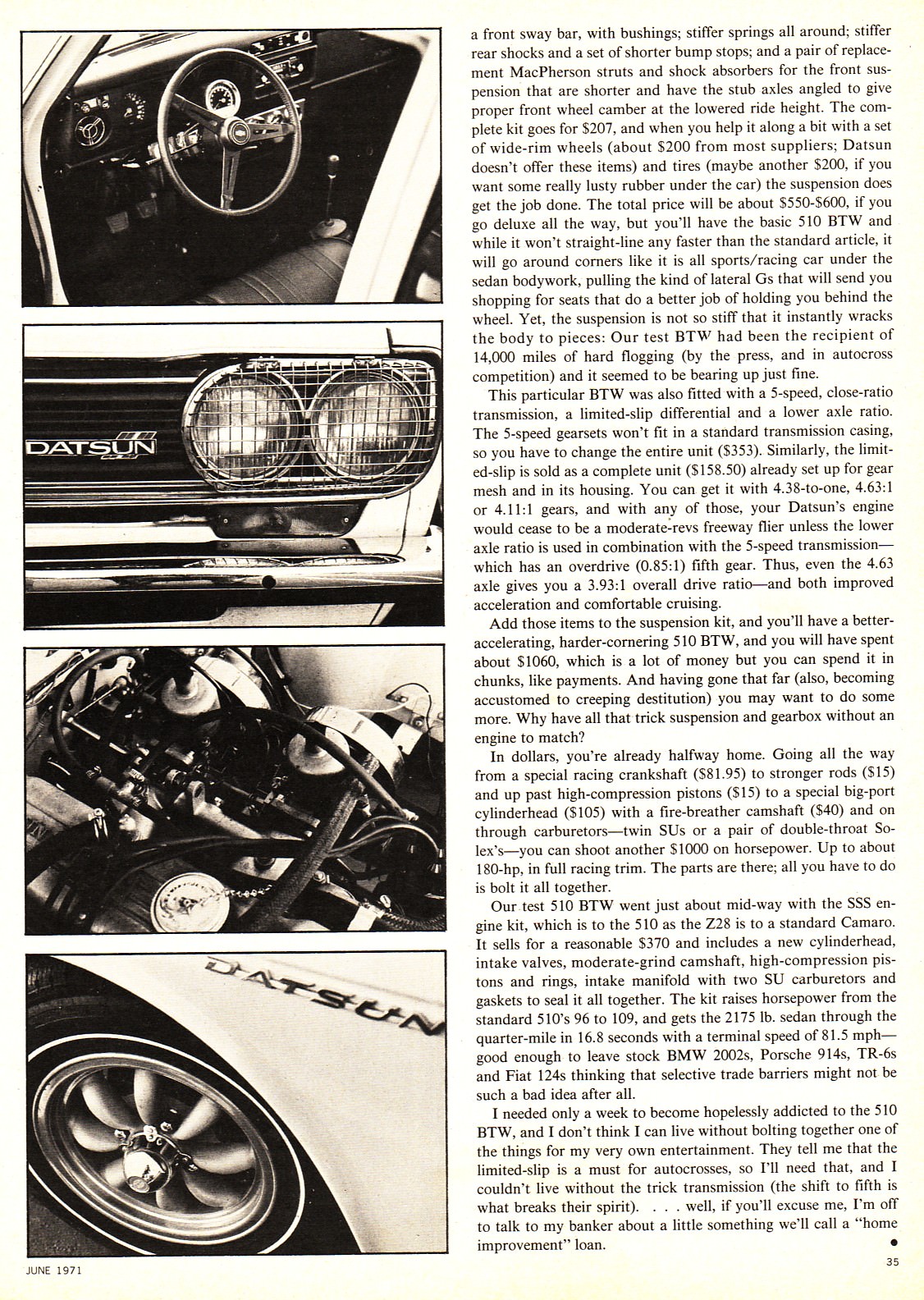 As usual I’ll supply a case or two of burgers for the grill - someone jumps in a takes a turn cooking.
Food by donation as I do this personally every year.

Bring a chair and a drink.
Drop me a line so I can gauge interest in the event. Usually about 40 people turn out. It’s a Friday this year so I may expect a few more that usually can’t make it on a work night.

I’ll look forward to seeing all local Datsun enthusiasts – or maybe not so local but happen to be in the area – do drop in.

Today is the day I am dragging out what I have left from Nissan Motorsports and some decals from my collection for
some swag give away.

Lets hope for a a nice day!
"Racing makes heroin addiction look like a vague wish for something salty" - Peter Egan

After spending an hour or so I have a nice little stash of things to bring. I'm hoping to get my final spring maintenance done this Friday as the weather for the day looks good.

Checking the methanol system is a bit of a major job.
"Racing makes heroin addiction look like a vague wish for something salty" - Peter Egan

Friday 236pm just saw you KEITH pulling into hwy10 and 128street chevron with your 510.all eyes were on you as u pulled in.sorry I'm driving my durango with my flat deck trailer or else would have come by to say hello.
Is there any drives going on this weekend that I don't know about.cant wait to follow the 510 brake lights one more time before my corolla wagon blue is sold
Top

No drives yet, I was at Andy's doing my inspection of my methanol system, then had to meet someone at the Chevron there, scary during in rush hour traffic..

I will be sure to give some heads up, weather is still a bit of a mess. Mountains getting more snow to night. Likely we will go South to Fort Casey, then back up the old #99, those routes will be clear of any road crap.
"Racing makes heroin addiction look like a vague wish for something salty" - Peter Egan

Is there any room for one more 510 and driver on this special occasion. I hope to have all the pre-knox prep work done this week as I have wanted to attend your 510 Day for some time now. Will need to have you text me an address, your living in Maple Ridge now?
Looking forward to catching up. Until then.

Hope you make it, saw your name on the Knox entry!
"Racing makes heroin addiction look like a vague wish for something salty" - Peter Egan

Hey Byron, I will be coming out.
If no one from the future comes back to stop you from doing it then how bad of a decision can it really be?
Top

I have some more things to give away too, sure hope the weather holds for the day.
"Racing makes heroin addiction look like a vague wish for something salty" - Peter Egan

Seems we have a spectacular day of weather, supposed to be very warm over at Byron's area.

I have my stash of goodies all loaded up, car fueled and ready to go.
"Racing makes heroin addiction look like a vague wish for something salty" - Peter Egan

BIG thanks to Byron, Joyce and Barry for letting the tradition continue, even if our main host could not be there!

WOW, that was one of my more frustrating and HOT drives out to Byron’s. I ran into really heavy traffic in Cloverdale and basically fought it the whole way. What a gong show of traffic lights and roads not able to handle the volume now. I will never do that corridor in rush hour again, I will go early and sit in a park for some hours. It was over 100F in my car, oil pressure dropped 10 PSI, water at least I could keep at 180F. I would keep motor RPM when sitting just to make sure cam was getting enough spray of oil.

So nice to see everyone, the new and old faces of our club. I counted 2 roadsters and 9 510’s, one of which was Robyn’s wagon.

Thanks to all that took my giveaways, another tub emptied from my basement!

We never really talked about a drive to come, I am going to plan one for either the first or second weekend in June. I plan to go to Fort Casey on Widbey Island, always a nice drive. A separate post will of course be initiated.

This was one of the first nights where sitting outside in a T-shirt was doable, even after the sun set, very nice.

I rolled out just after 9 PM, window down the whole way back, nice cool temp compared to the drive out. I just rolled the car quickly into the garage and shut the motor off so as not to disturb the neighbours. Today I will blast over and square the car up so my son in law can get through.

We have a few weeks to get car ready for our next drive, lets hope for good weather!