Calipers all free? I had a similar feel more years ago than I'd care to remember on a Z project. In the end the front calipers were stuck
Top

greenthumb wrote: ↑
18 Mar 2019 19:43
Calipers all free? I had a similar feel more years ago than I'd care to remember on a Z project. In the end the front calipers were stuck

Yep. They're good. When I was trying to bleed and wasn't sure things were working. I pulled each caliper and put a block of wood in and extended the pistons with the brake pedal. All seemed good.

Even if the booster didn’t work, you should still be able to stop the car with more effort.

I’ve run 15/16” with no booster in a 510 with the stock pedal configuration- it takes effort but it works.

There must be something else. Is your MC crap right out of the box? Just a thought.

Not sure what I can suggest other than go without the booster and see what happens. Seems like a useless mod at this point however.

I hope someone has been here and knows your issue.

The brakes worked fine before I installed the booster. It took effort to brake, but the more I pressed, the more I stopped. This pedal is flaccid and never gets hard. (no innuendo intended) It will slow the car, but in a panic brake or threshold braking situation, it will end the car's life. I'm really hoping someone has some input.

The only other "mod" I did when I installed the booster, was to remove the residual valves from the MC. I doubt they were doing anything anyway since the rubber was falling apart. The booster was a re manufactured unit, and only had 11,000 miles on it. Even if the valves did something, they shouldn't do any work while pressing the pedal, only on return to keep fluid in the system. The only other change would be the brake fluid. I used Motul RBF 600.
1972 Datsun 510
7-bolt 4G63T, EVO 9 pistons & rods, Garrett GT3076R, "Flipped" Stock Intake Manifold, Toyota R154, Z31 R200 w/ CVs
Top

I know that this has been suggested earlier, so may not be overly helpful now, but it sounds like you still have some air trapped in the system.

On a recent non-510 car project I was working on I performed a 5 speed transmission swap and ended up also using a Tilton hydraulic throw out bearing. The clutch master cylinder was a Wilwood "girling style" integral unit with built in reservoir, which was staring to seep, so I replaced it with the exact same unit. I ran more than a litre of fluid through the system, one clutch pedal pump at a time, and couldn't get the clutch to fully disengage (couldn't get into first gear when the car was running and sitting still because the input shaft remained energized).

I ended up getting a Motive Products pressure bleeder and modified an old Wilwood reservoir cap to accept the Motive fittings. I filled the canister with fluid, cranked the cap on the MC nice and tight, pumped it up to 10 psi, crawled under the car to crack the bleeder open, and watched my clear drain hose with great interest. I stream of perfect fluid flowed out for a good 5 seconds, and then, wait for it....a few air bubbled came out which had been stuck in the MC and would never have come out otherwise. The steady stream of fluid through the MC (about a half litre) must have grabbed some of the trapped bubbles and flushed them out. Problem solved and the clutch works fine.

I wouldn't have believed it had I not witnessed it with my own eyes, as I have never had an issue like this in the past. With respect to the Datsun MC, I doubt that there would be a way of being able to properly seal the cap so that the reservoir could accept pressure and hold it, so unfortunately the Motive pressure bleeder system might not be something you could experiment with. But if you could find a way to make something like this work with the MC it may be worth a try.

I'm still at it. The brakes still have a lot of weak pressure on the first part of pedal travel and then hard. I have managed to make them work with effort, but that's not why I installed the booster.
To alleviate any wrong parts matching on my end, I decided to get a 7/8" MC from an S30. Unfortunately, this has caused some different issues. I was under the impression that nearly everyone runs this combo of parts. I can't image how that's possible with the added length of the 7/8" MC at the rear. Mine does not fit the B210 spacer like the 15/16" unit does. Every 7/8" unit I see listed is the same as mine. I think the combination will work if you bore out the spacer at the end, but I've never seen anyone post information about this. What am I doing wrong now? 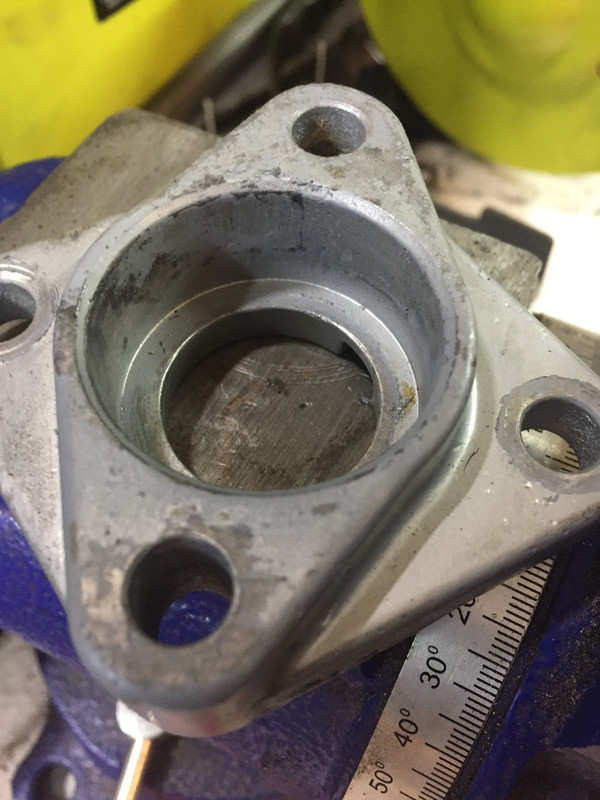 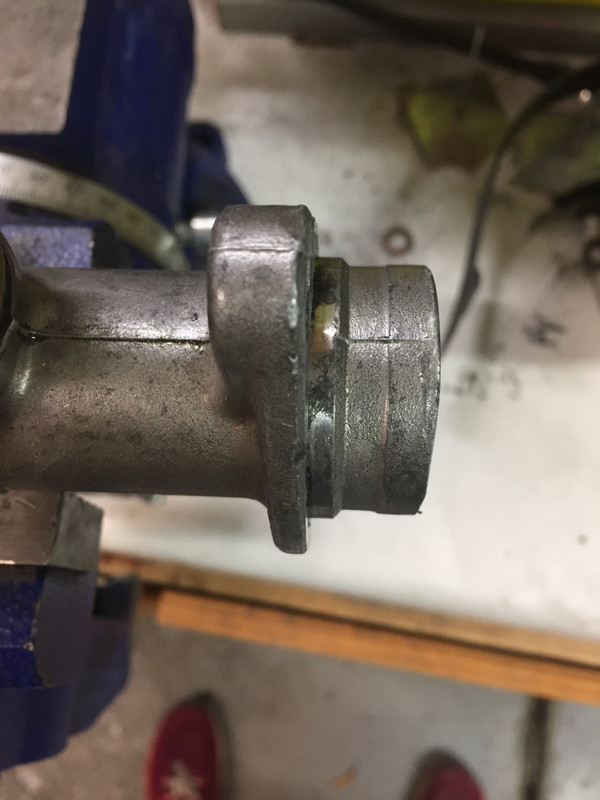 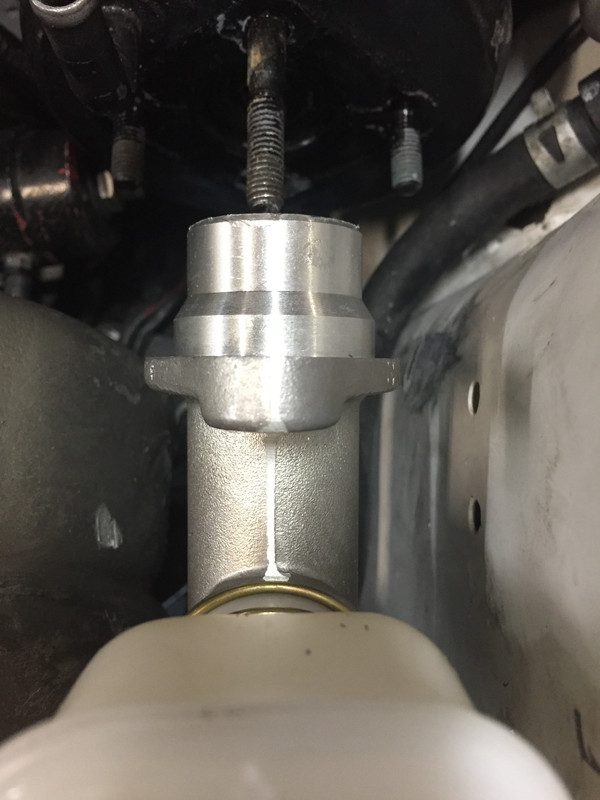 The only good news is that with the bleeder ports facing the shock tower, I don't have to modify anything to fit this MC. That is, if it even works. 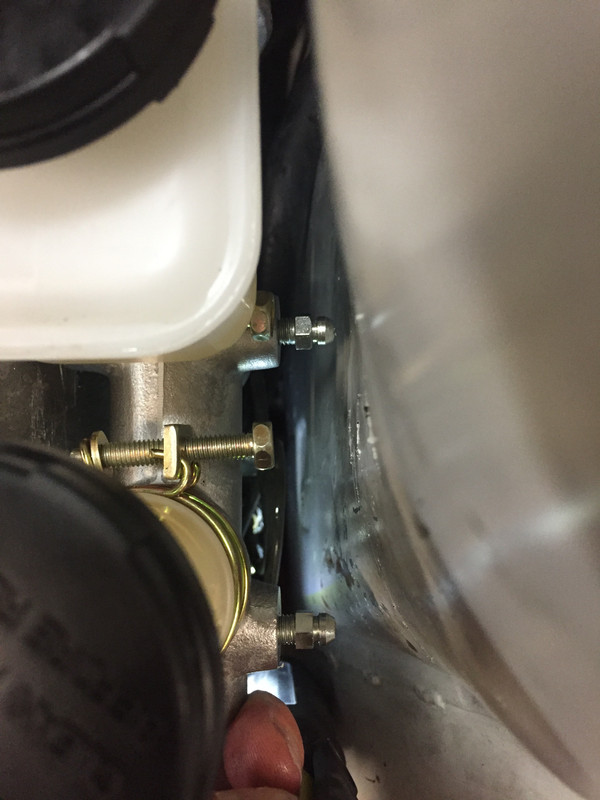 Last question; are you supposed to remove these rubber "stoppers"? Everyone says they are there for drum brakes to hold pressure in the line, but there is one in each port front and rear. They also don't seem to do much. If anything, they would allow pressure into the lines from the brakes, and not from the MC since they seat facing down. 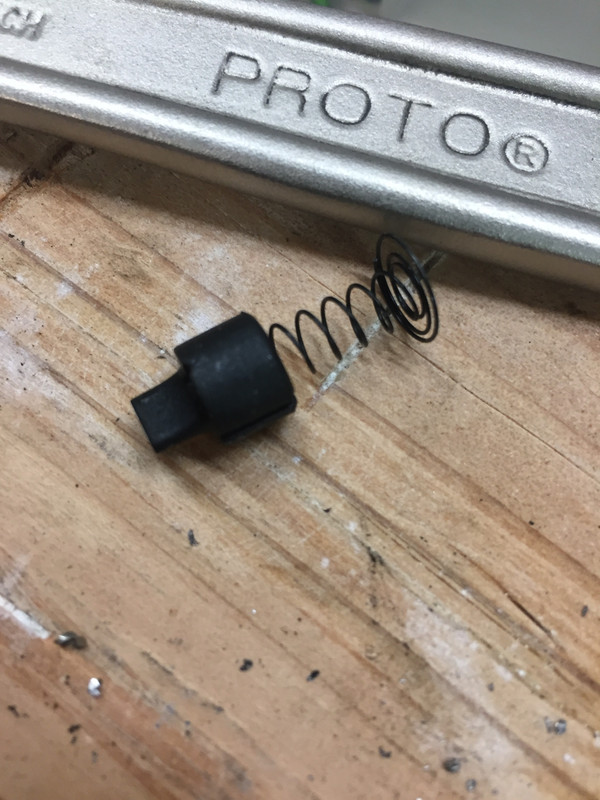 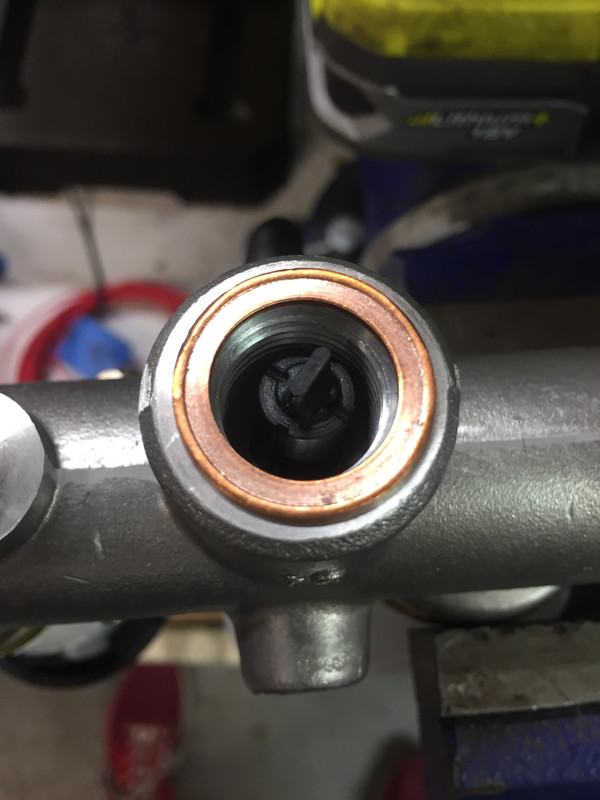 I found a single reference to my issue of fitment in an old post. Either open up the spacer hole, or use the S30 spacer. I don't have an S30 laying around, so I used a step bit to open it up. Here is the result. 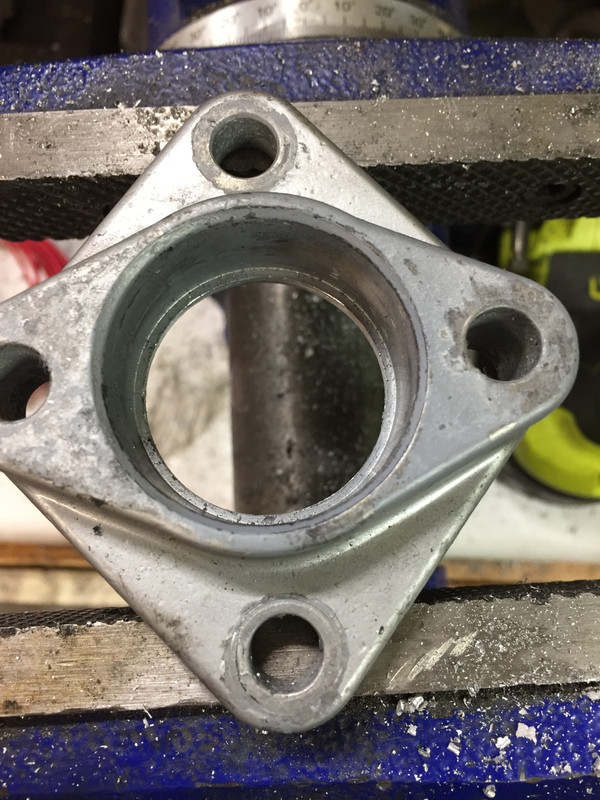 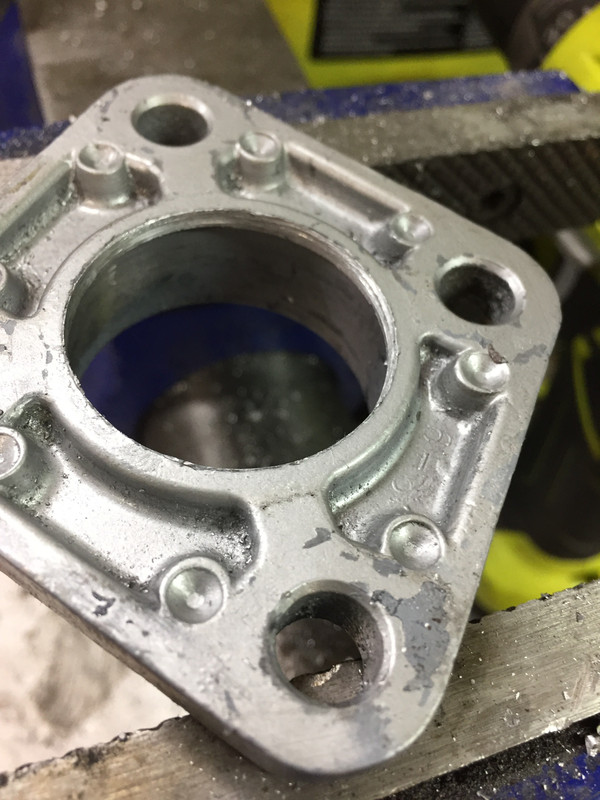 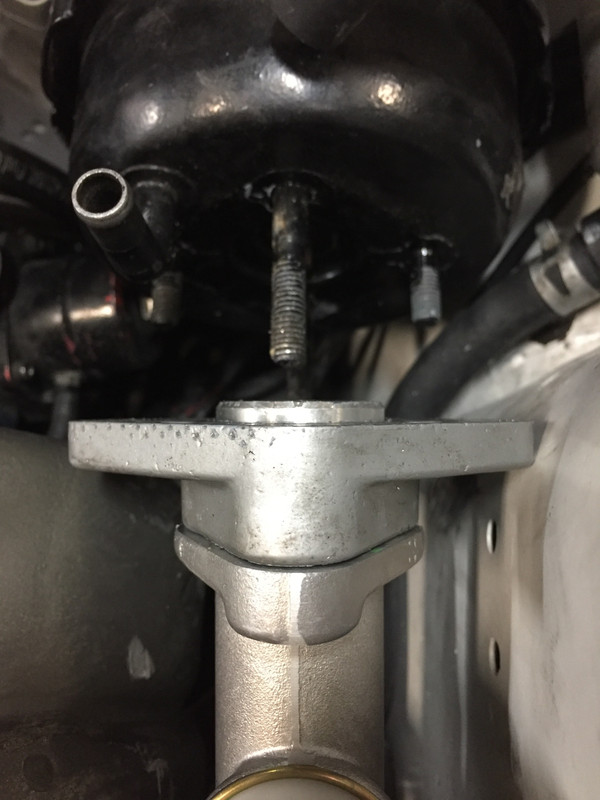 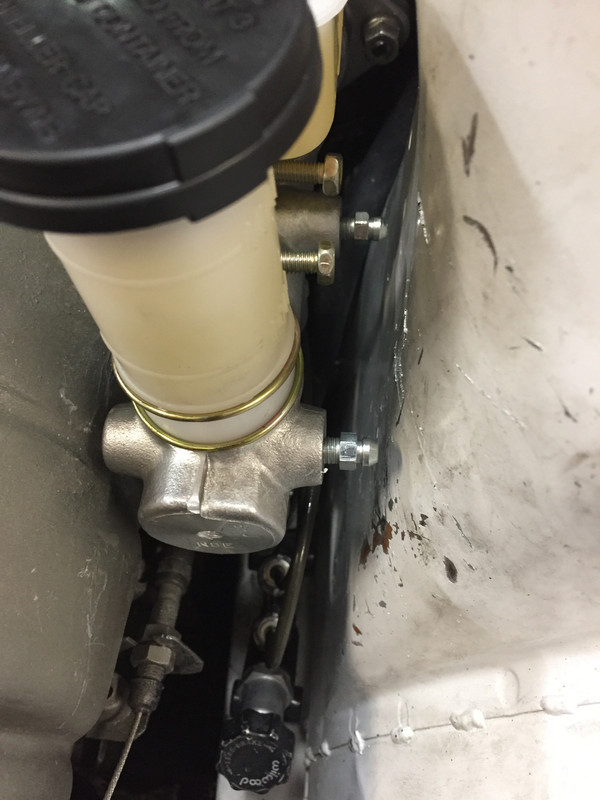 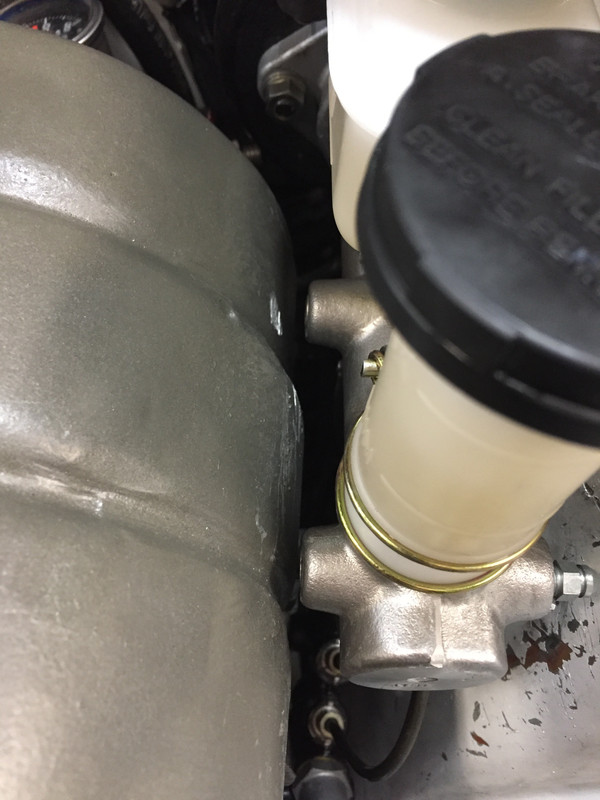 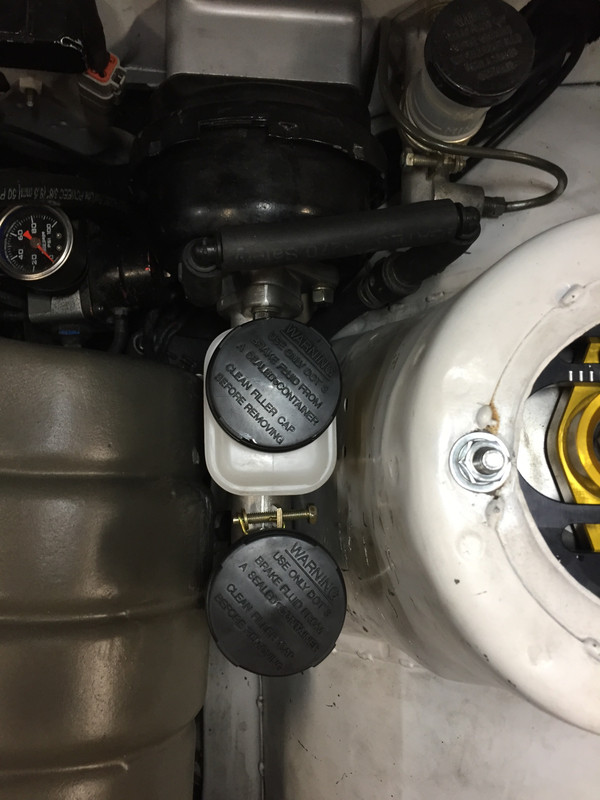 I vaguely recall opening that hole up as well back in the day.

As far as the spring check valve/residual pressure valves go, I removed the rear one when I got my new master. If there is one in the front, it may be a lower spring pressure but I can’t say for certain because I never looked at mine.

There’s nothing more disheartening than poor feeling brakes—especially after spending so much time working on them.

Does the feel change if you disconnect the booster? I know when I had the booster and the 7/8, the brakes felt like a light switch and that was when they were bled properly etc. I ditched the booster then and never looked back.

I can’t recall how your rear brakes are oriented, are the bleeders located directly at the top? Same with fronts? If not, it’ll be real tough to bleed all the air.