Has anyone tried to install 280ZX rear control arms onto a 510 crossmember?

Will it work? If you go to coilover shocks it might, but what about track width and wheelbase, and half-shaft bolt up? The setup does give you rear disc brakes.

Datsun 510 subframe with 280zx arms
Has brand new calipers, new pads, and drilled rotors. Also comes with the e-brake cable. The subframe has been modified to fit an R200 diff.
The last couple of pics are with that rear subframe and 280zx arms on my car.
Please serious buyers only.

Well, for a start there are two different 280ZX control arms, and neither are the same geometry as the 510.

I did document the differences between the 280ZX early and late arms here - there never was a need to compare them to a 510 arm.

I've seen a couple people install S130 trailing arms on a 510, but those people have never stuck around to actually document the alignment specs. Maybe my camber/toe adjusters that I sell can correct things - I've not known of someone who's tried.

Anyways, here's the documentation that I did comparing the early and late S130 trailing arms from a facebook post of mine of 280ZX Drivers about a month ago - click the link and you'll also get the photos;

AND to add the crossmember mod to give adjustable camber and toe. Which "may" give you the adjustment needed to get an adequate toe/camber.

BUT what about track width? Would some offset wheels be needed to keep the wheel/tire combo under the fenders with or without flares?

Not to mention the additional mods to the front brakes and master cylinder.
Top

I seem to recall somebody saying that the track width with the 280zx arms is wider. By how much, I'm not sure. I think that a few people have done it successfully, albeit with a good amount of other modifications. I think the fairly well known car called the "Strutless Wonder" used 280zx trailing arms.
Duke Schimmer

I'd rather but 510 arms on the ZX so wider rims would fit.
"People don't like it when shit doesn't match their rule of thumb." Sam
Top

Yes— we put 280ZX rear control arms in the “Strutless Wonder”, but also narrowed the pickup points on the crossmember to compensate for the wider width. As I recall, it increased the track by 3/4” on each side before mods.

When I had TeamThump build a new rear x-member for the Strutless car in 2010, I bought a set of 280zx control arms to replace the ones on the car, only to find that the inner half shaft mounting flange length was different than the ones that were on the car (control arms themselves were the same). I determined that I actually had 1st gen Datsun 810/Maxima control arms under the car, not 280zx arms.

When I went to install a Wolf Creek CV half shaft kit, the relocation of the arms inward on the x-member was just enough for the kit axle length to be too long. I mounted them up, safety-wired all the bolts, only to find they bound tight as I moved the arms through their travel. Bummer. Still haven’t put a set of CV half shafts under the car, as they would have to be custom-length. About 3/8”shorter per side is what I needed, IIRC.
Kurt Hafer
'70 2dr VG30et "Strutless Wonder"
Top

I have the 82-83 control arms on my 510. I always tell people don't do it. I did it 25+ years ago so I could have rear disc brakes and strong mounts for coil overs. It required me to build a custom Penultimate cross member to deal with the increased track width and toe difference of the 280ZX arms. Also the coil over mounts are high on the control arm requiring a really short shock body. Today you can buy disc brake kits, coil over kits, and adjustable camber/toe kits made to fit the 510.
Top

Not sure what years it is from, can't remember think it was from a 79-81, but I've got the r180 and arms from a 280zx in my dime. Only reason I did it was my stock arms were beyond saving, and I couldn't find any arms in my area (at the time) and couldn't afford to get some shipped to me. As cambo said, it isn't worth it. Luckily I had already done the Penultimate crossmember, but for the other reasons like he says it isn't worth it I'd agree with. I'm actually in the process of trying to find some stock 510 arms to put back in her. And can't remember how much the track is widened, but stock 15x7 0 offset wheels where tucked, with the 280 arms they stuck out about 1/2-3/4". 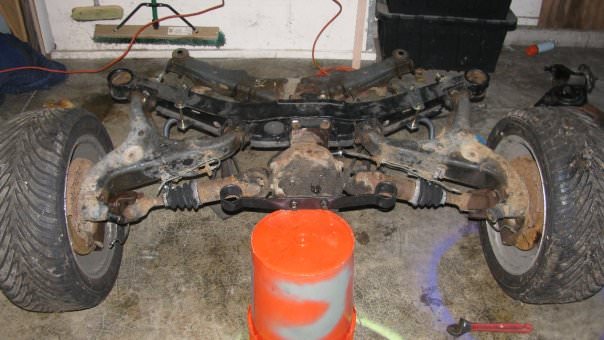