Nice job on the strut housings. I recently had to buy an M20x1.5 die to repair some of the threads on one of my rear axles and thought that one was pretty big, BUT that tap for those struts is massive!
Chris
'71 510 4-Door Sedan
'76 280z
Top

Not a ton of pictures this time (this is a messy job and forgot to grab the phone for photos).

I had contacted a couple of my local driveline shops about rebuilding my half-shafts and nobody wanted to deal with the 'center' portion where the balls and spacers are. So, I bead blasted the axles (u-joints still in) to remove the rust/paint, but protect the mounting surface, removed the old u-joints using my shop press (marking the mating parts with a punch), disassembled the sliding joint, degreased all of the spacers/balls, and painted the parts (masking where the caps go). Getting the center section apart requires a good set of snap ring pliers. I did take one picture to remind me which end the spacer/ball pattern starts.

Spacer on this end: 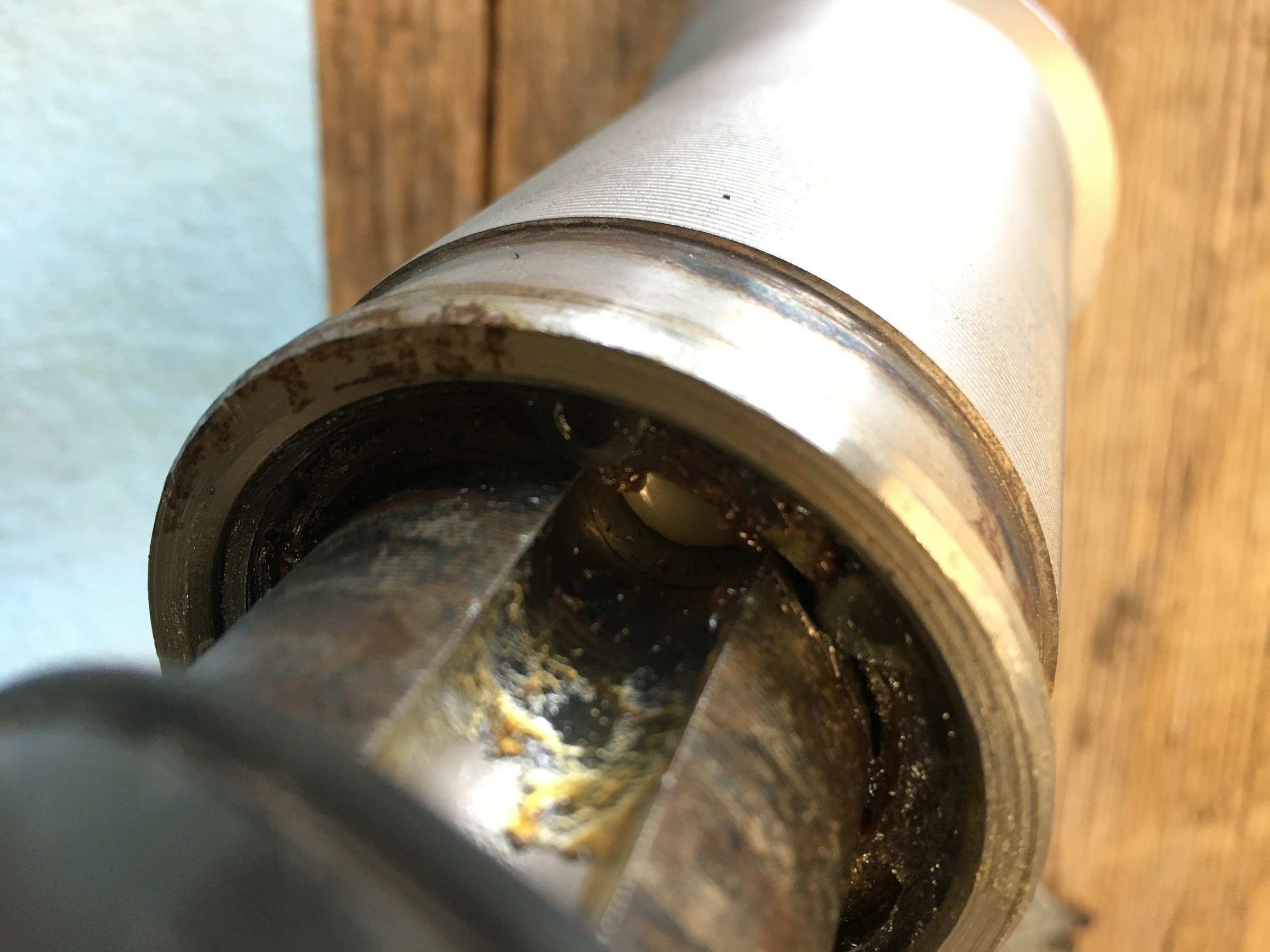 It is a pain in the ass to get the balls/spacers to line up and not fall out when you put them back together. You have to roll the assembly up and down between the two extremes to get them to seat properly. I struck them to the 'center' then pushed the whole thing into the 'tube'. I used an entire tube of CV joint lube between the two axles. My boots and other bits and pieces looked fine so reused them. 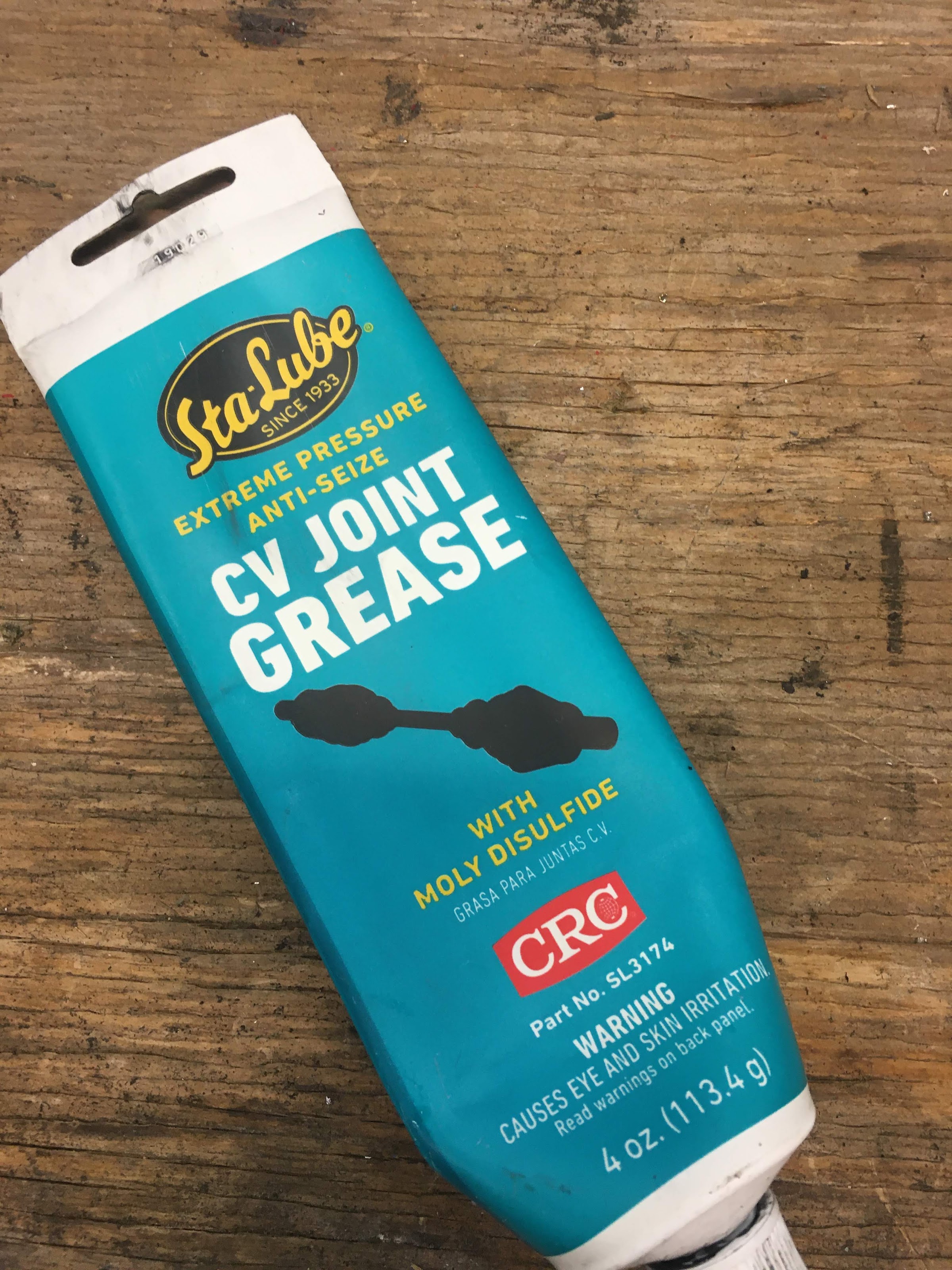 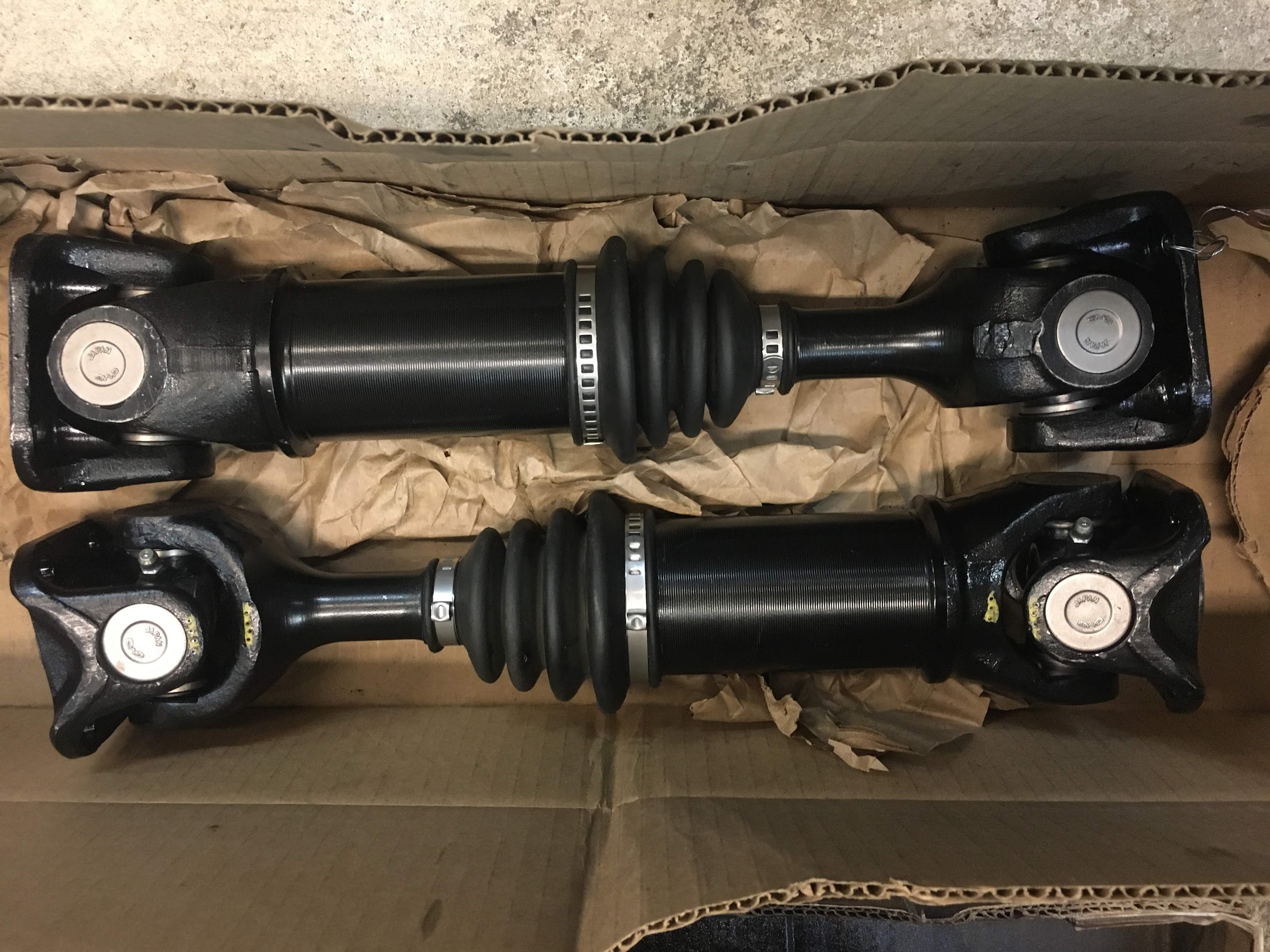 Not super exciting, but one more thing ready to go back in when the time comes.
Stu

Nice results. Looks good. I have been considering doing this myself. Boots are still available from Nissan I believe.
Top

Great info on how the half-shafts come apart. I did just the opposite with my u-joints. I had a hell of a time pressing the old ones out so I took them to a driveshaft shop and had them do it (had to take my driveshaft to be shortened anyway), but I pressed the new ones in fairly easily.


iceman510 wrote: ↑
22 May 2020 08:29
Nice results. Looks good. I have been considering doing this myself. Boots are still available from Nissan I believe.

This thread shows the insides of the half shaft way better than my description.

My S15 SR20DE came with a FS5W71C transmission. Since this is significantly longer than the transmission that came in the car, surgery on the tunnel was needed. While this is nothing "new" in the 510 world, here is how I did mine.

I am running a JBC front cross member with stock SR20 motor mounts. In order to get the motor as level front-to-back as possible, the back end of the transmission needed to be pretty damn high compared to where most transmission cross members put it since most are "universal" for all sorts of engine/transmission combos in the 510.

I bought a Z Car Depot transmission mount PN 650-289 because it looked sturdy and like it humped up a good distance for the exhaust.

The description says it can be used with a stock Z car mount (already had one), but when I got the cross member, there was no way it was going to work, way tooooo short. I bought an Energy Suspension 3.1108G (I think this is the same one that Z Car Depot sells too). 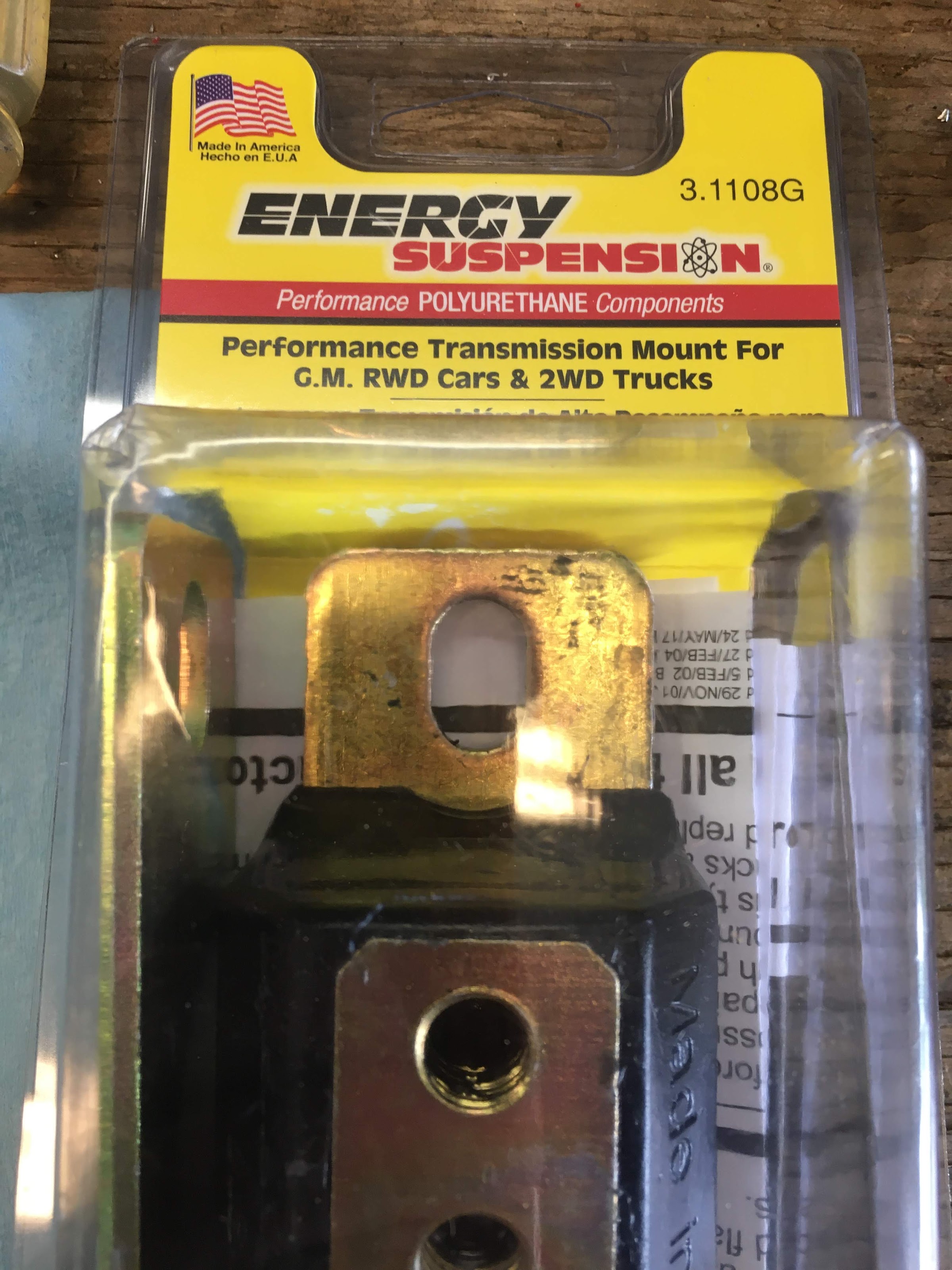 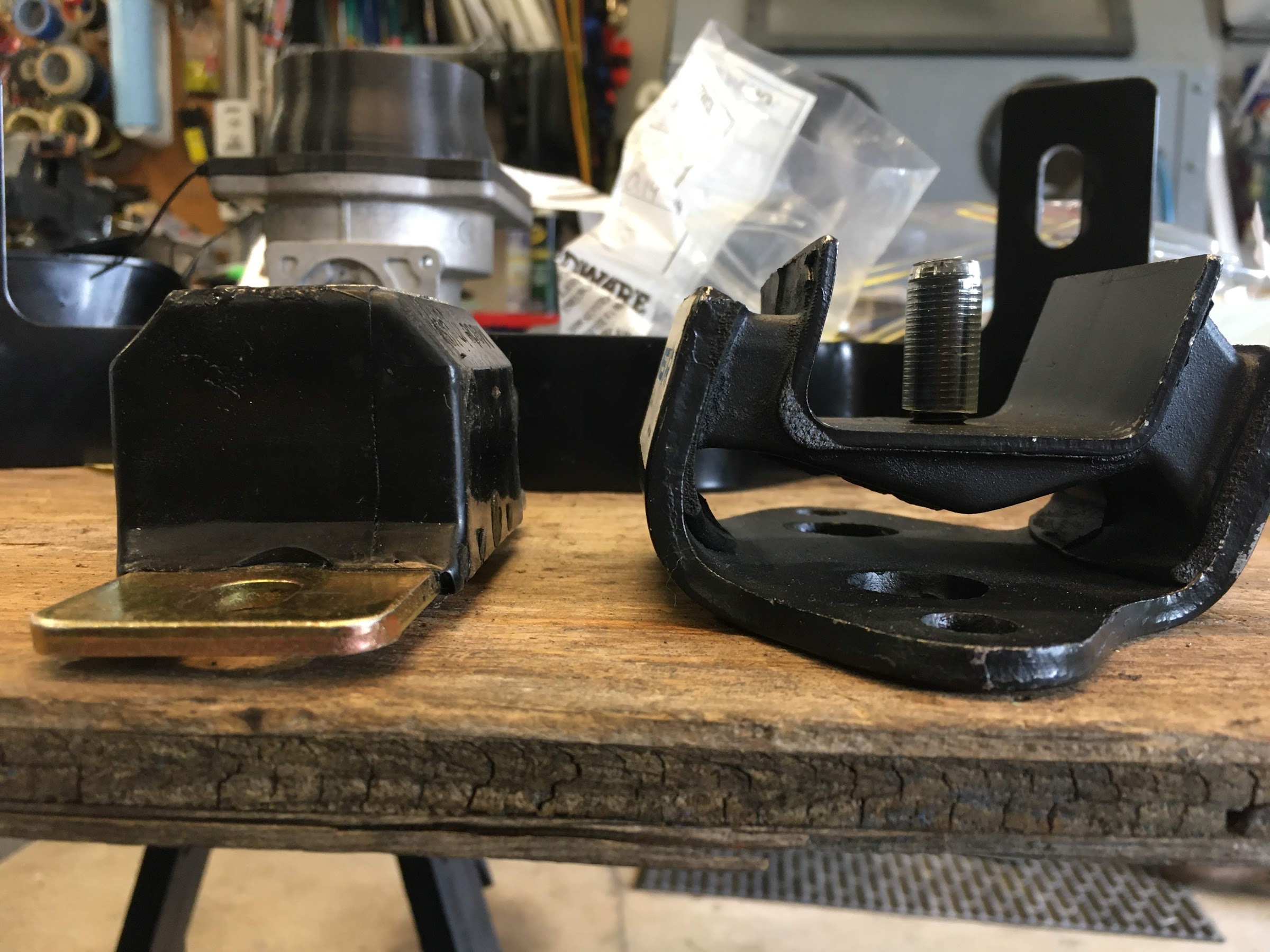 Even with this taller mount, the tail-shaft was low. I figured I needed about a 1" addition spacer to get the 3" I wanted. I had some 1/2"x2" wide Al bar stock in my 'pile' so made two spacers.

One problem with the Z Car Depot cross member is the bolts they send are not the correct thread pitch for the 510. My car uses M10x1.25, so off to the hardware store (we have a great one right down the street) to get the correct flange bolts. I also needed longer bolts for the mount/spacers. 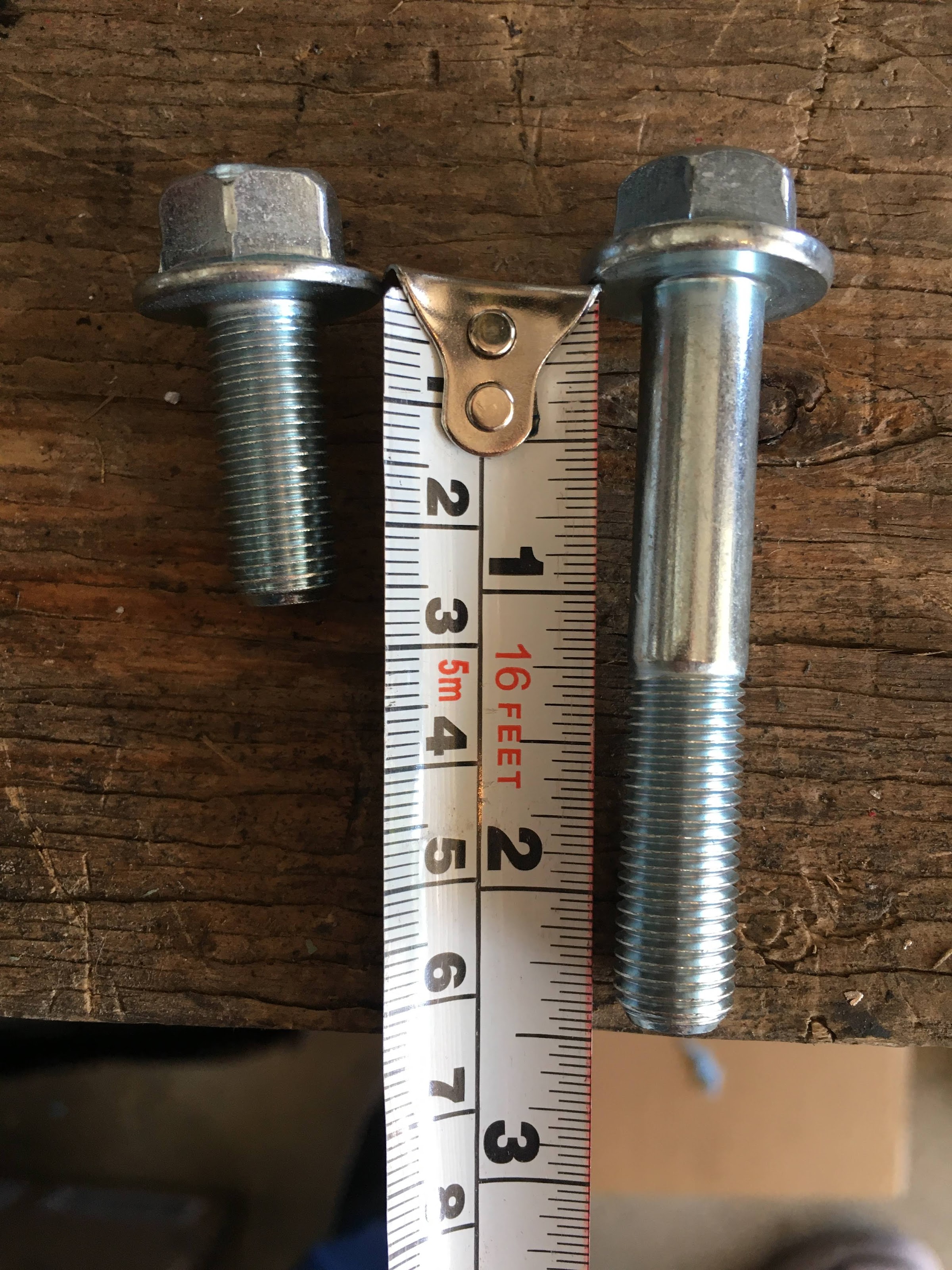 The transmission came with T-bolts that index against a flat on the case flange. The new bolts are too long to come in from the top (will need to bolt check these to make sure they don't drop out, but no other way to mount). The flange nuts that were used with the T-bolts were too wide so I removed one edge to replicate the T-bolt so they would fit correctly to the flange. 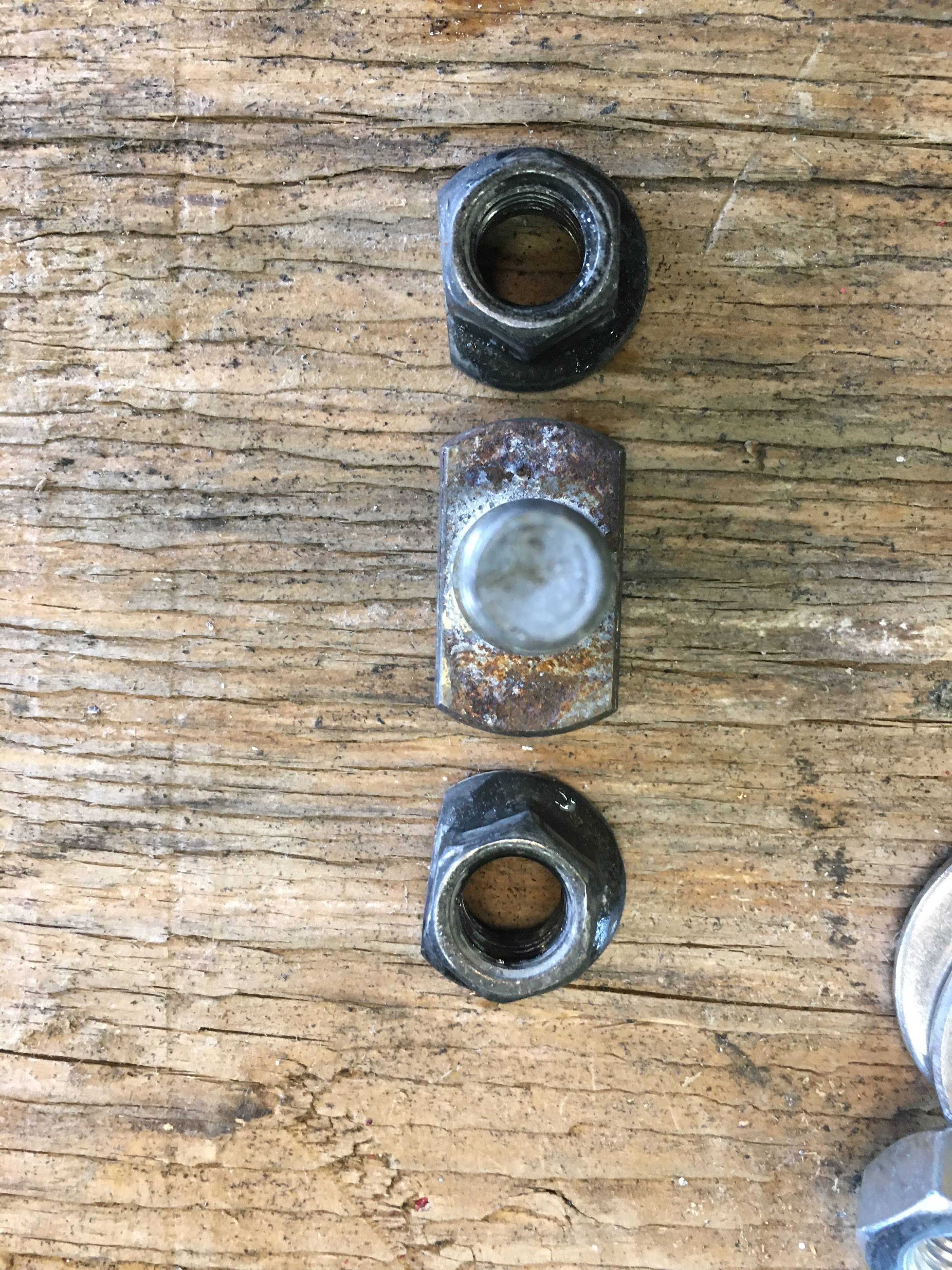 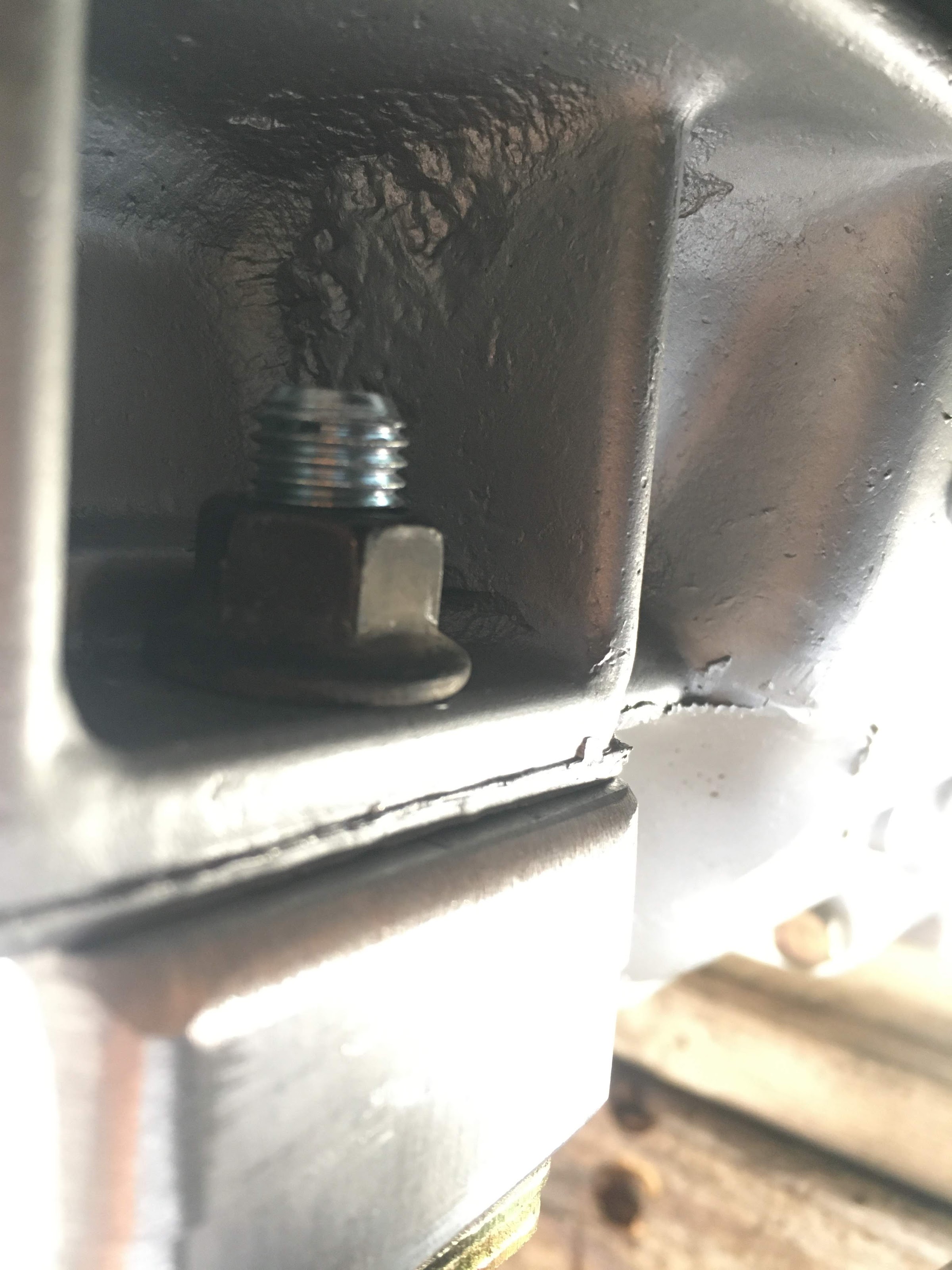 Here it is all mounted and tight. The lower bolt is one of the only standard thread bolts on the car other than the seat belt anchors... 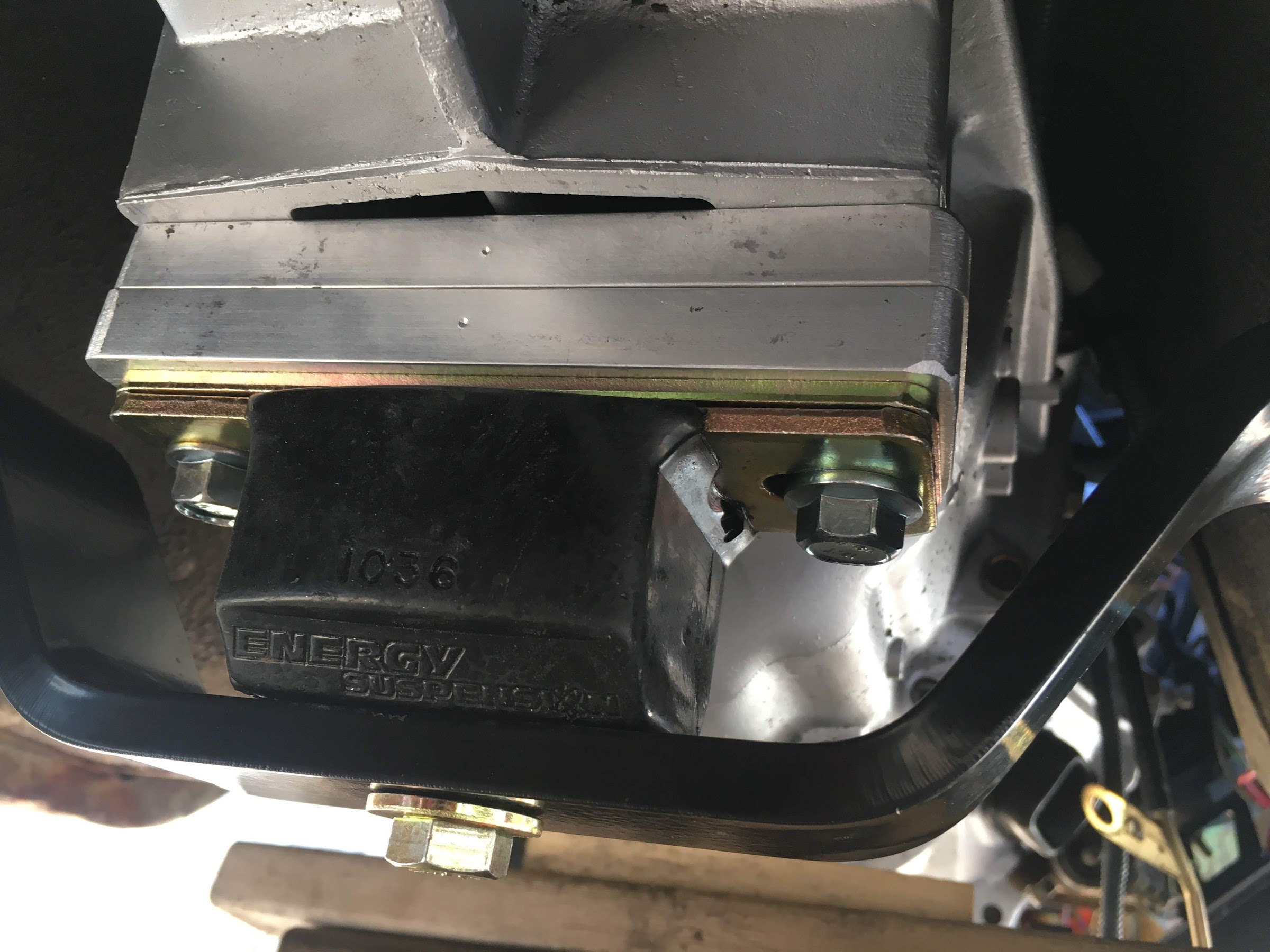 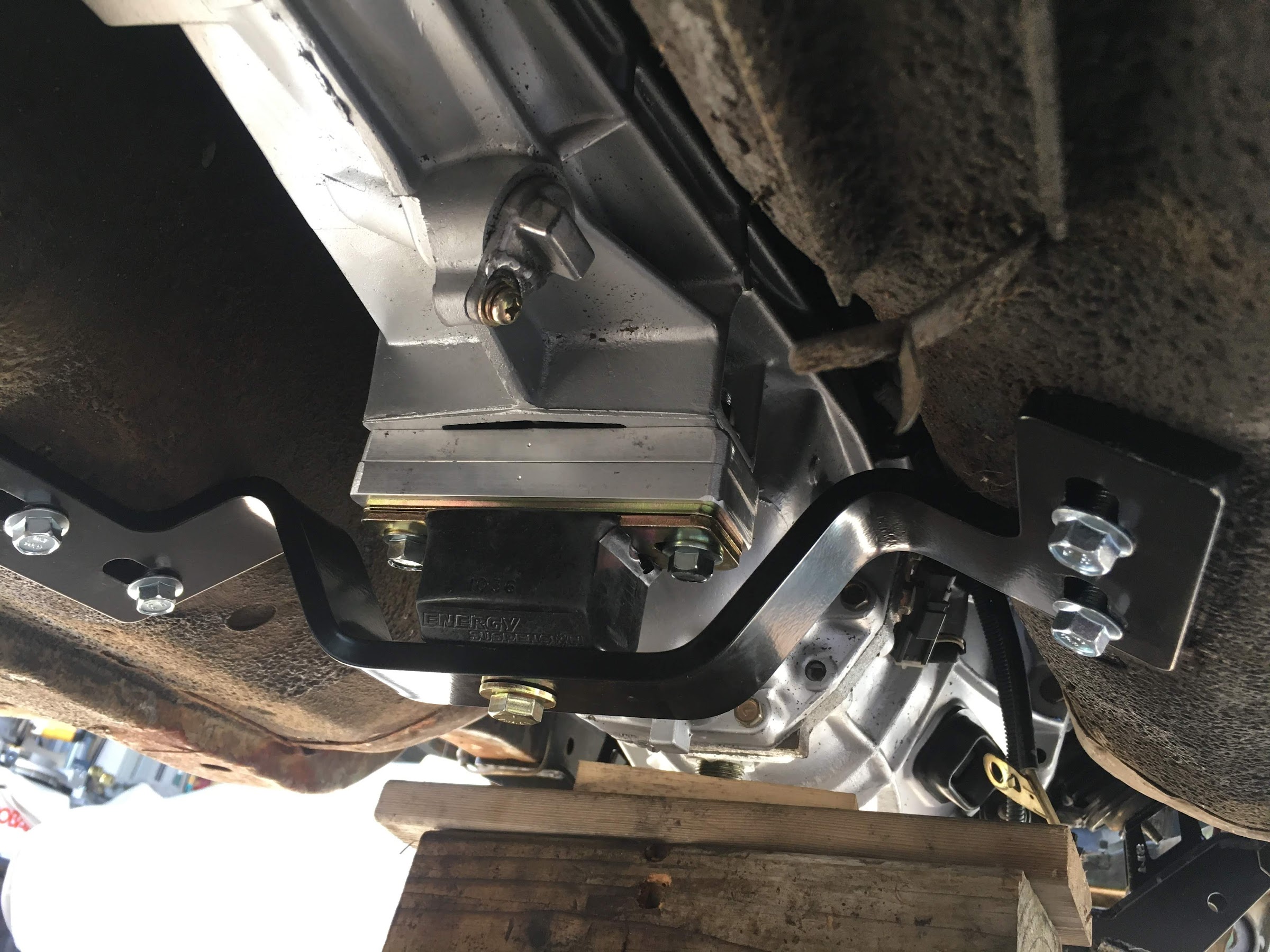 This put the 'spray shield' even with the bottom of the remaining tunnel. Both of the hard lines have already been cut and will need to be re-run... 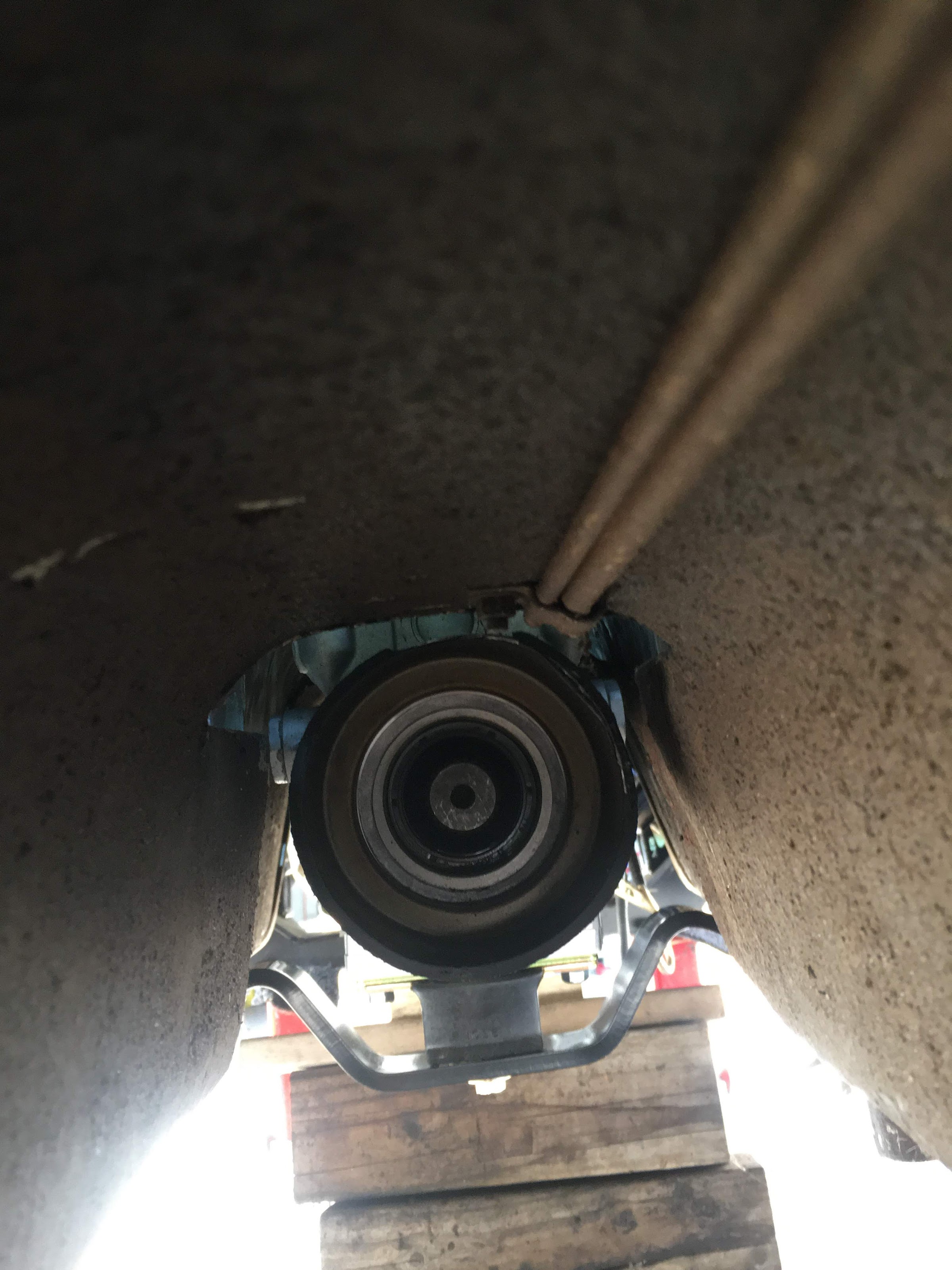 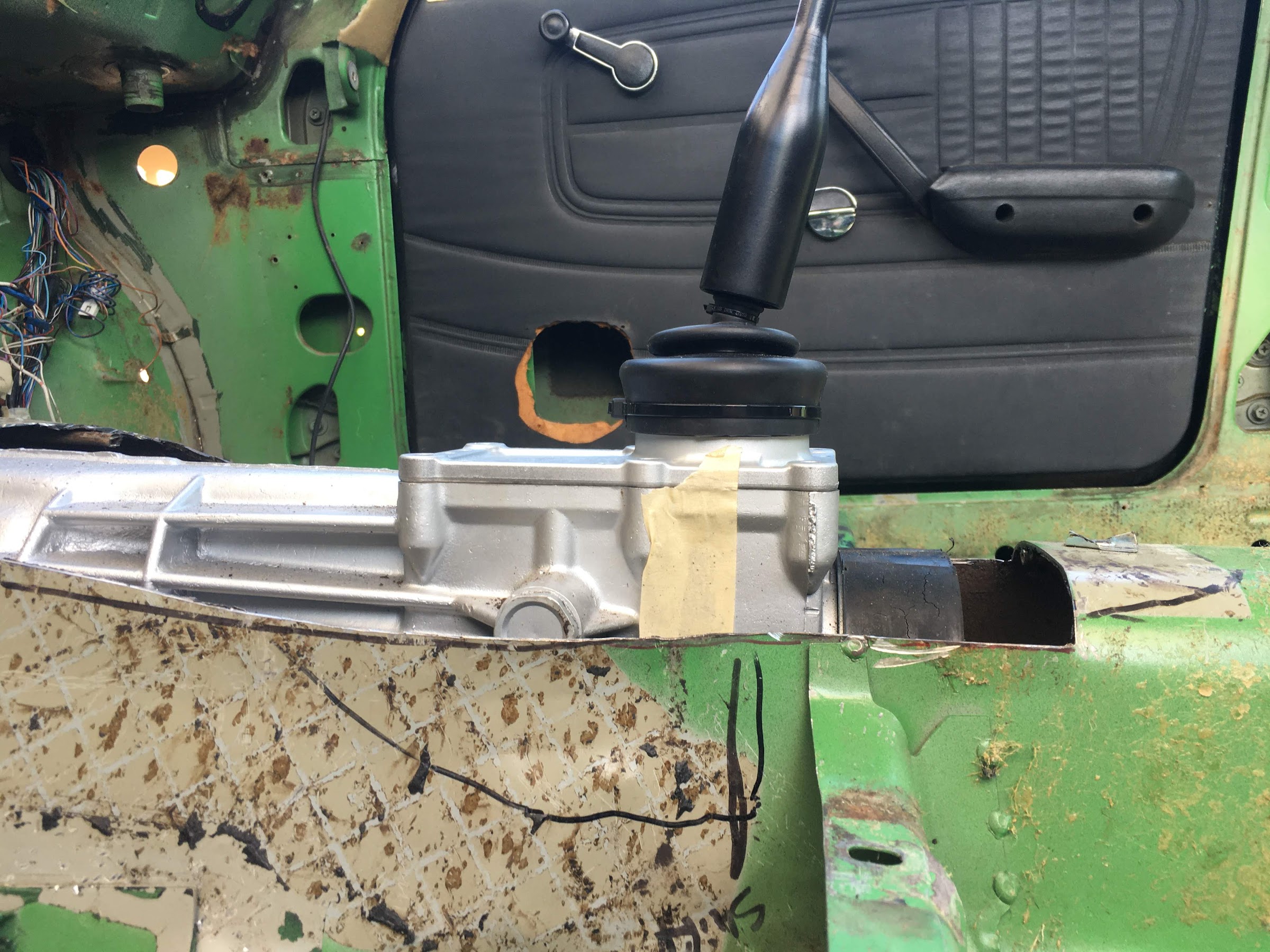 I measured the angles of the tail-shaft and differential flange, and it looks like I will have 2-3 deg pinion angle.

I'll be pulling the transmission tomorrow to start working on the tunnel cover.
Stu

Here is my take on making a transmission tunnel cover for the gaping hole the 71C required.

The shift detent bolts were way too close. 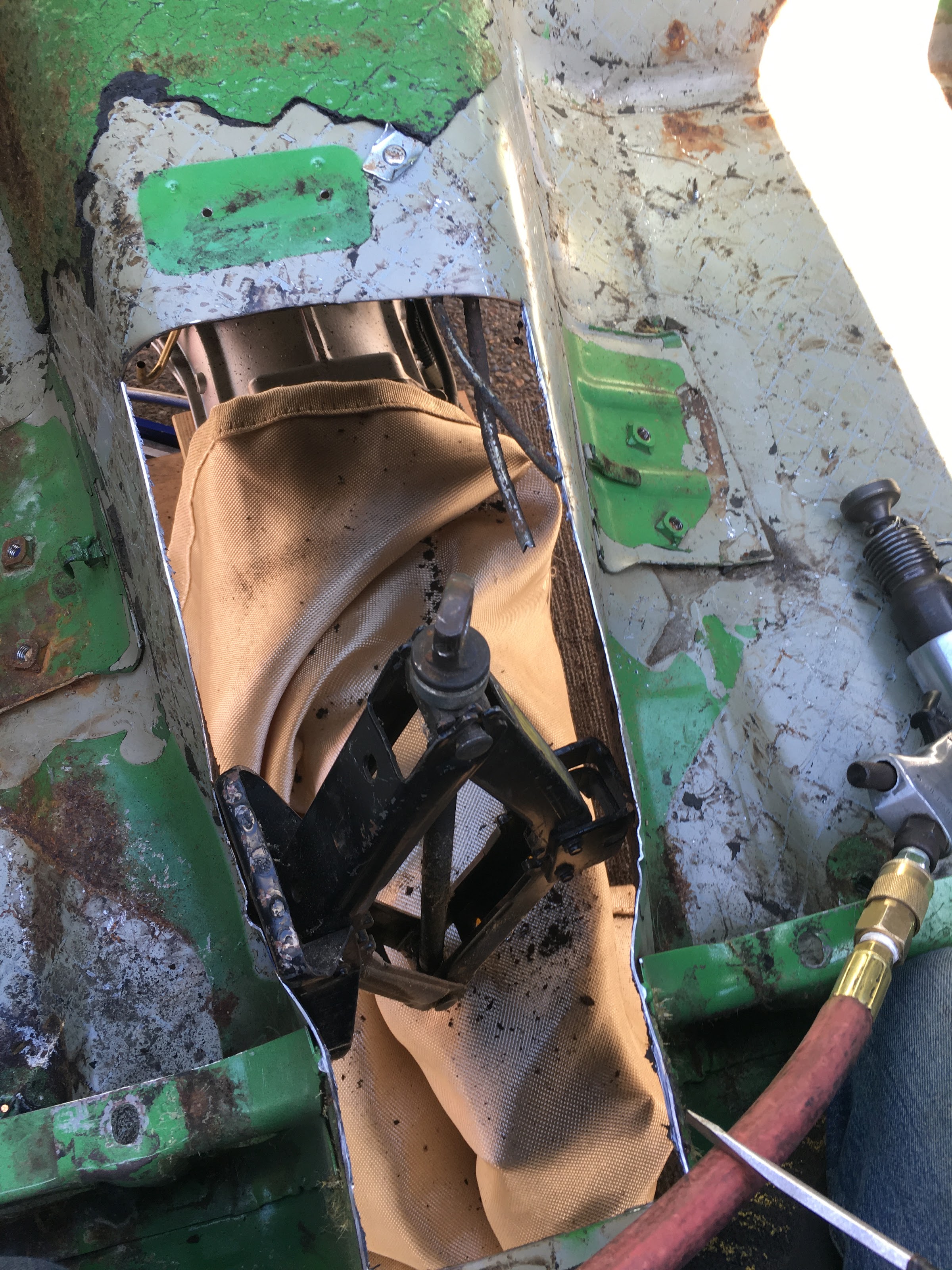 Some 18ga sheet bent and welded 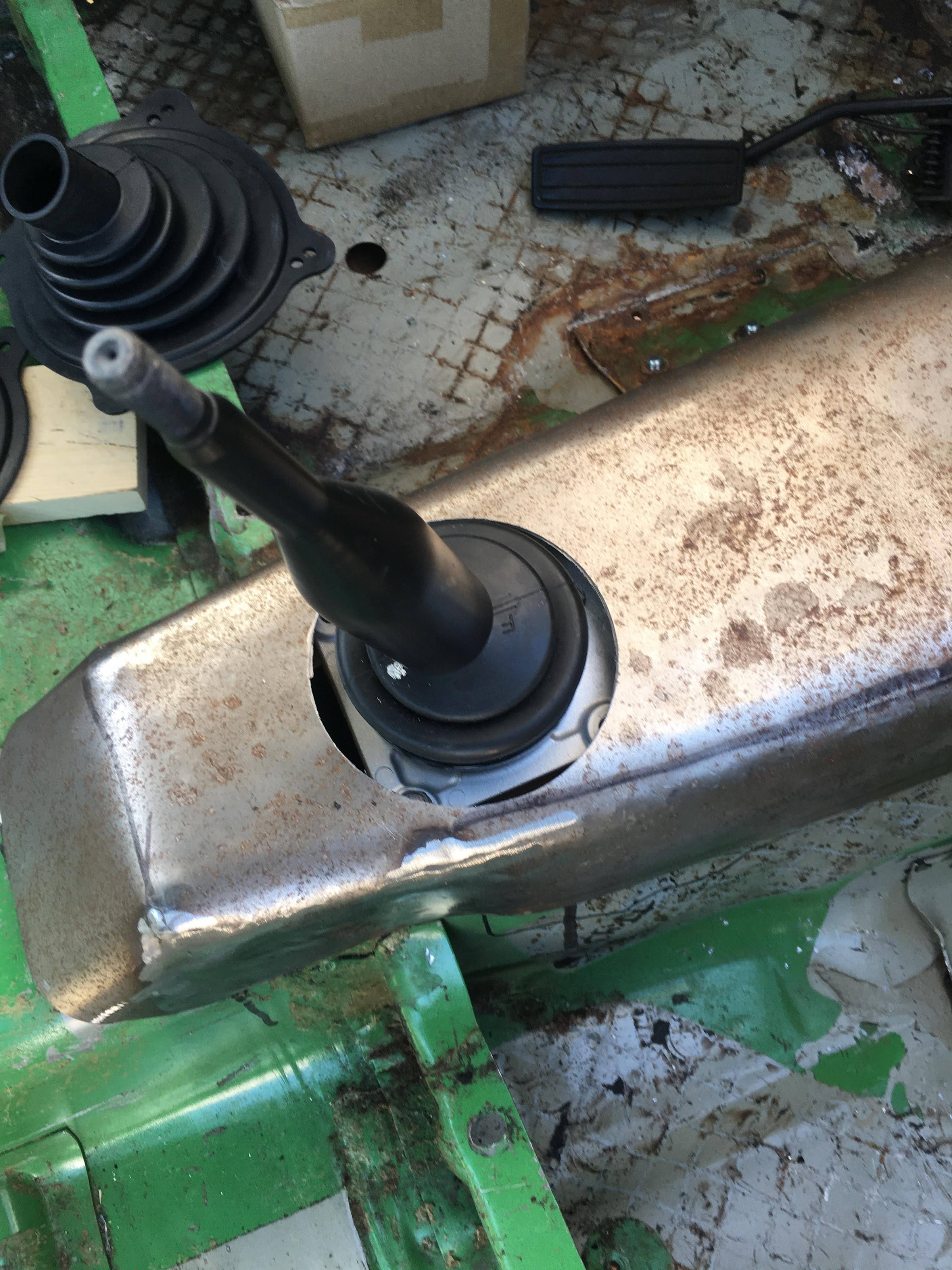 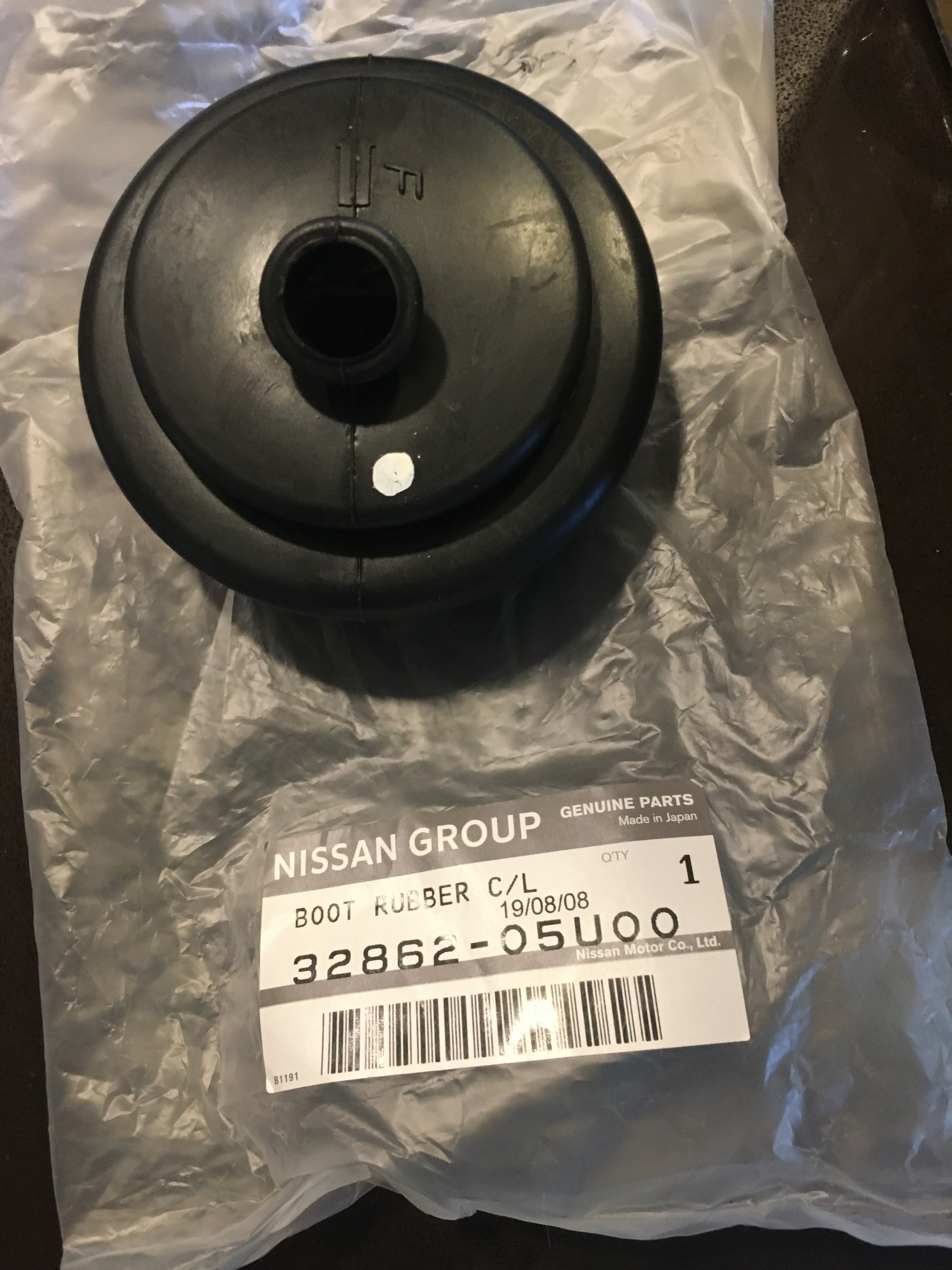 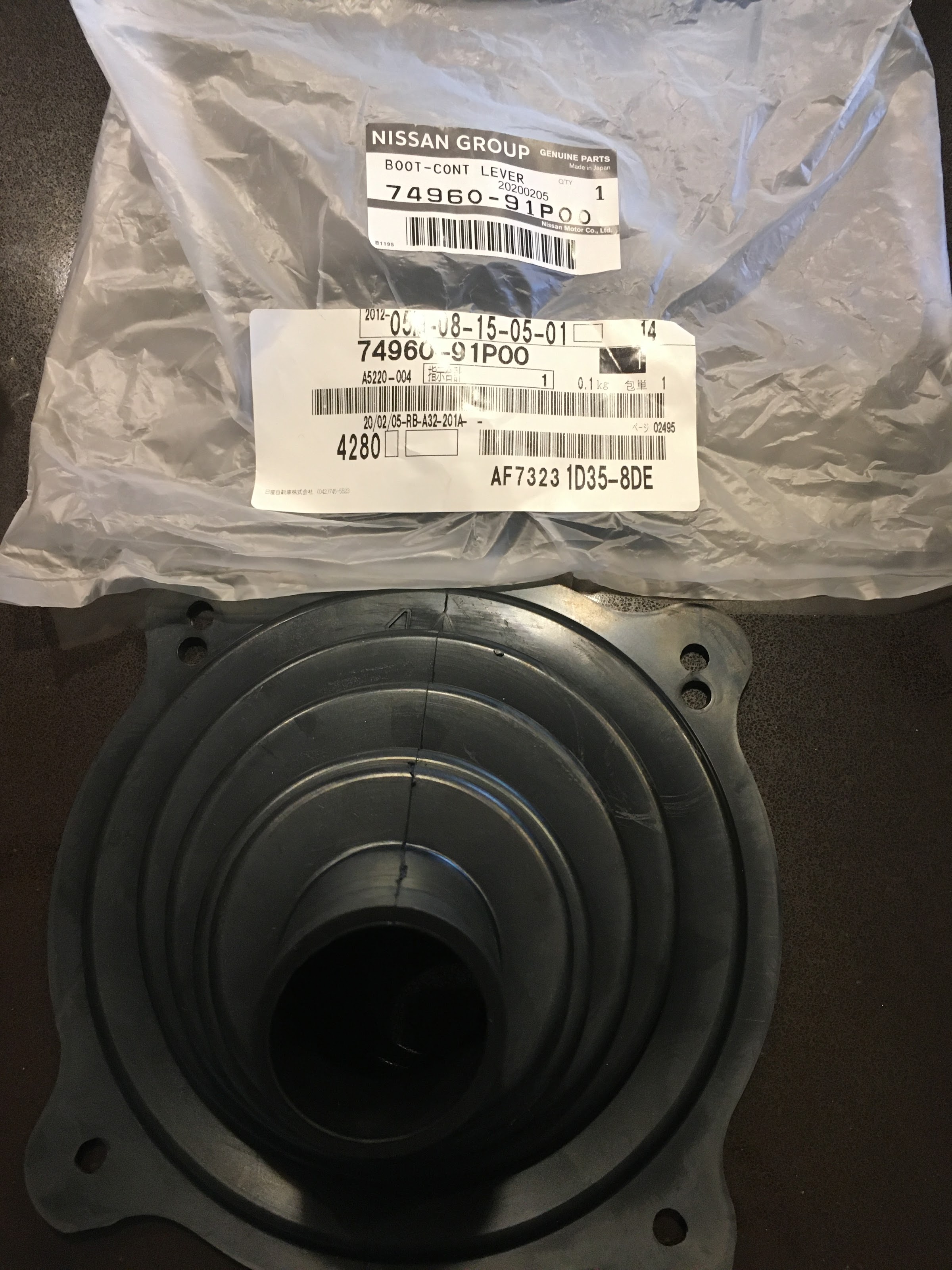 Cut to fit the new tunnel 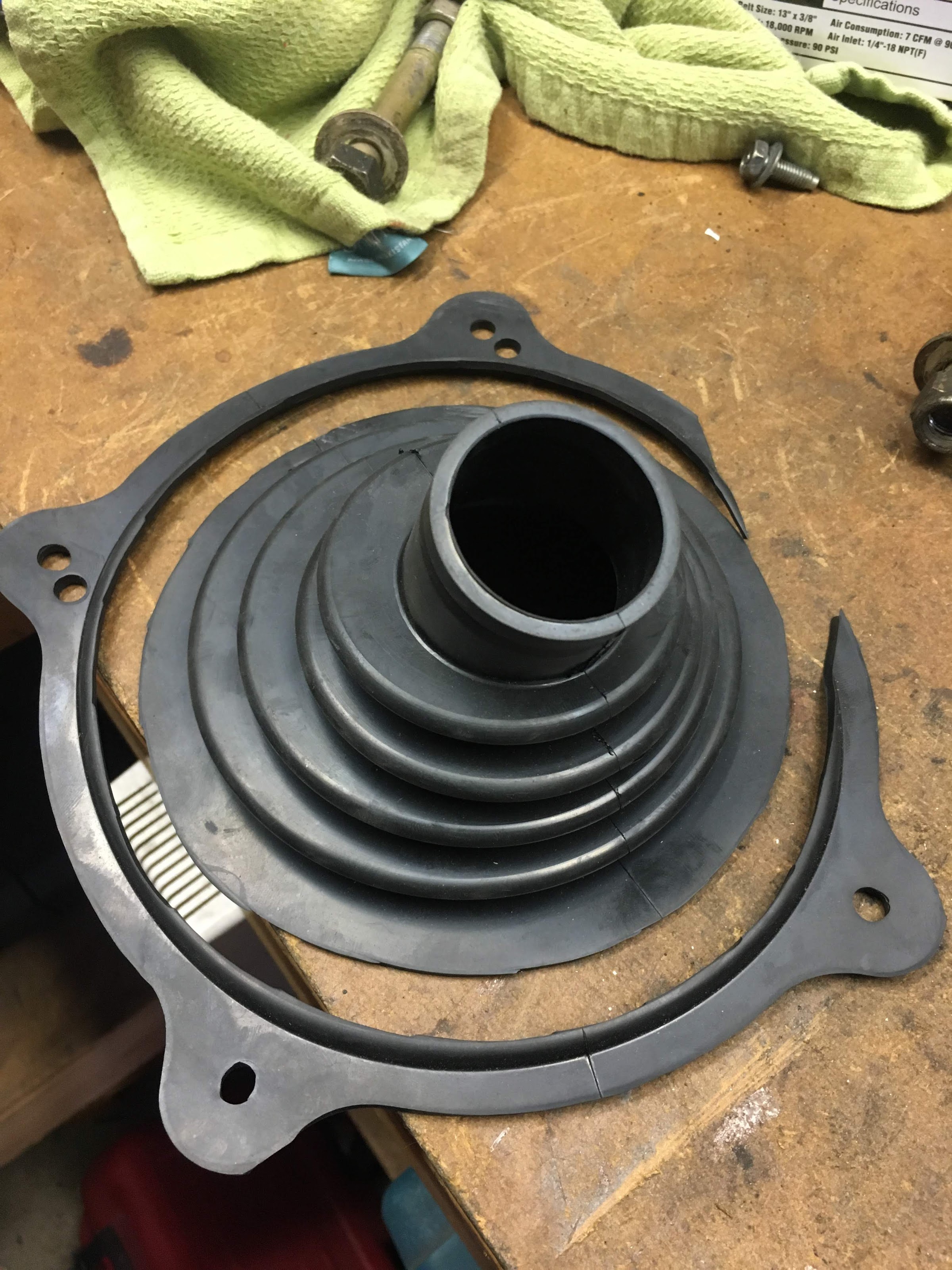 I'll add a trim ring or something to seal it to the sheet metal. My son just bought a 3D printer so I might have him make me something 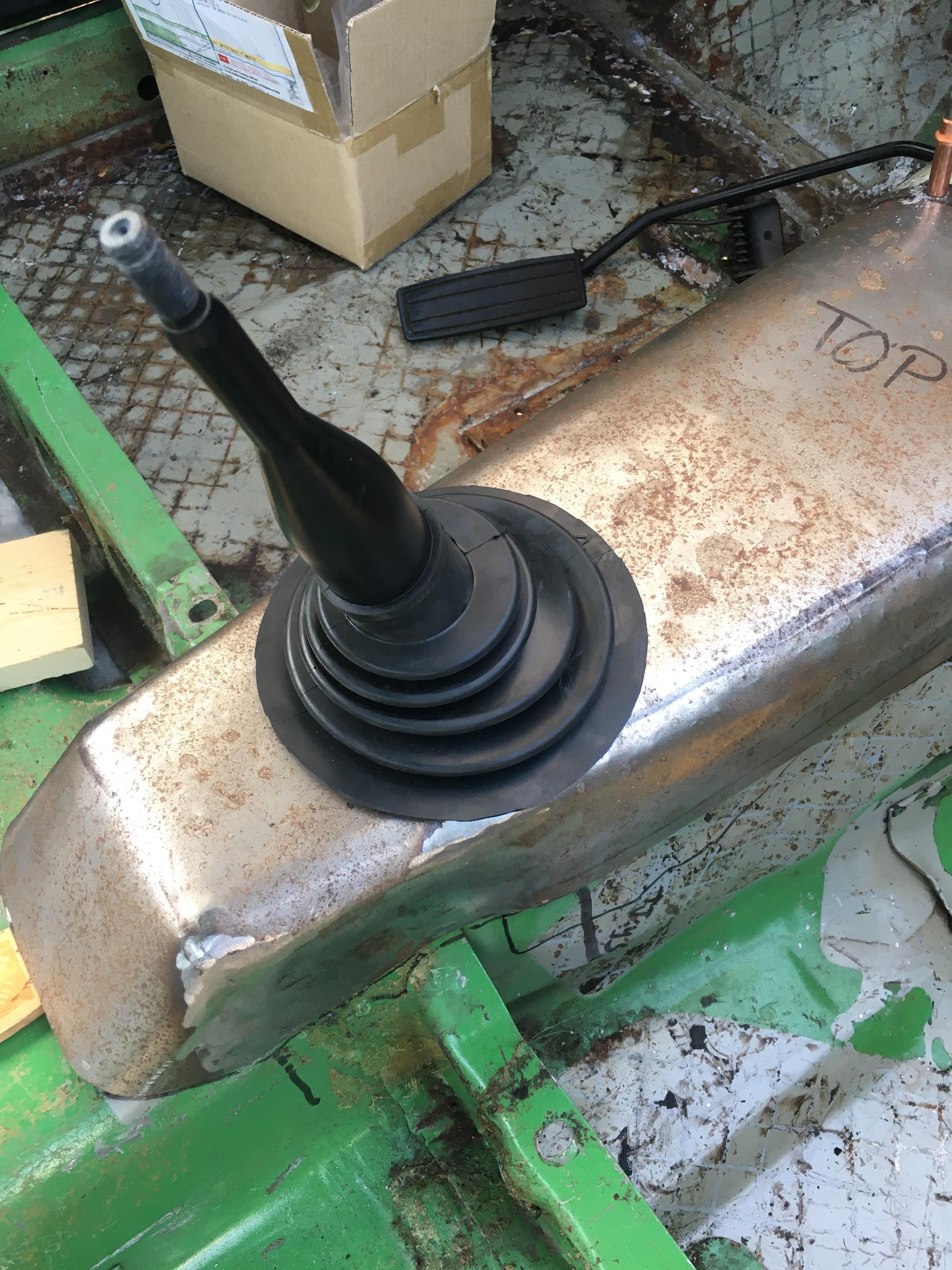 This tab on the top of the transmission is too close to the tunnel and I'll grind it off to make more clearance. 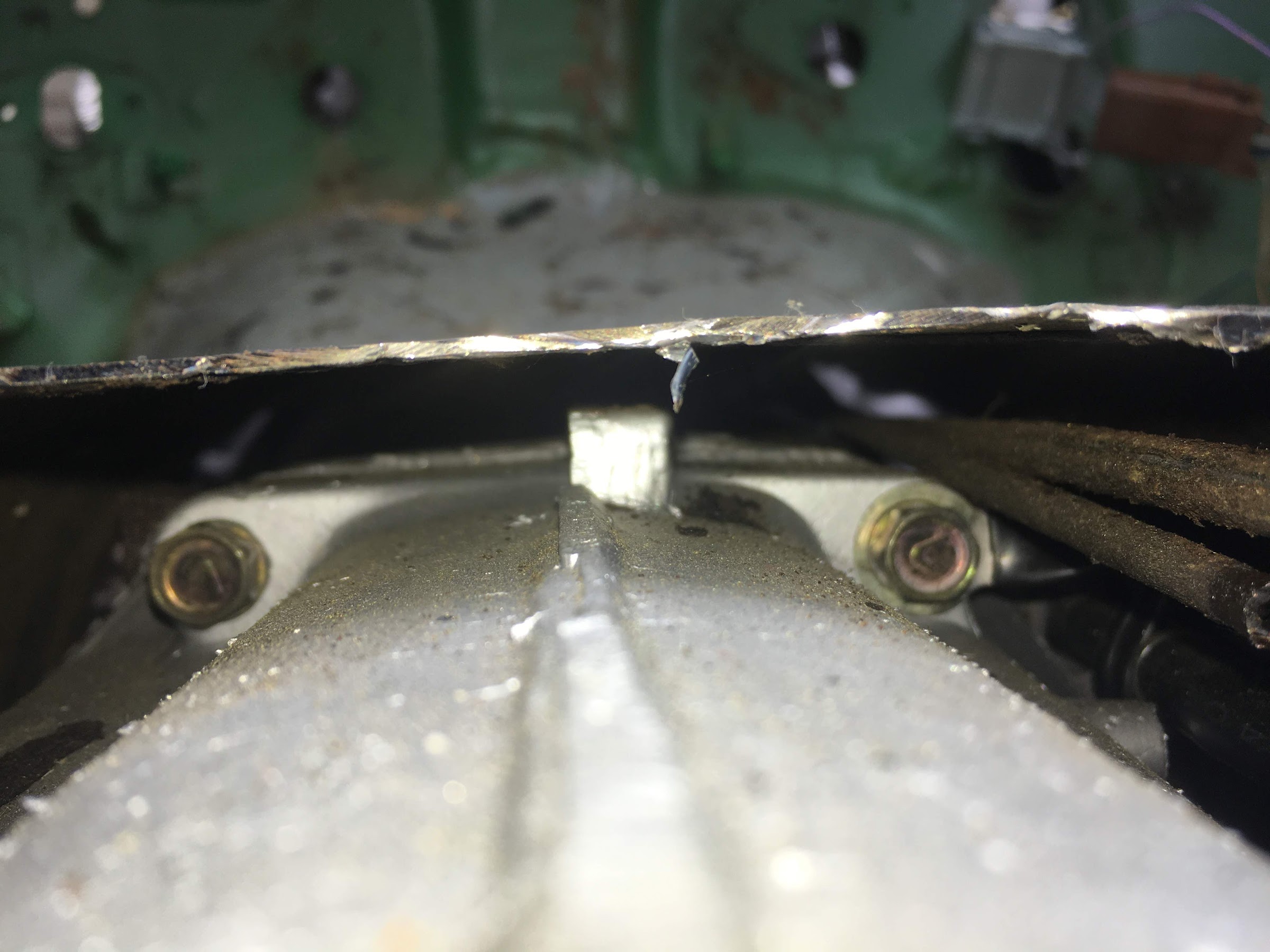 Welded in and sealed up inside and outside 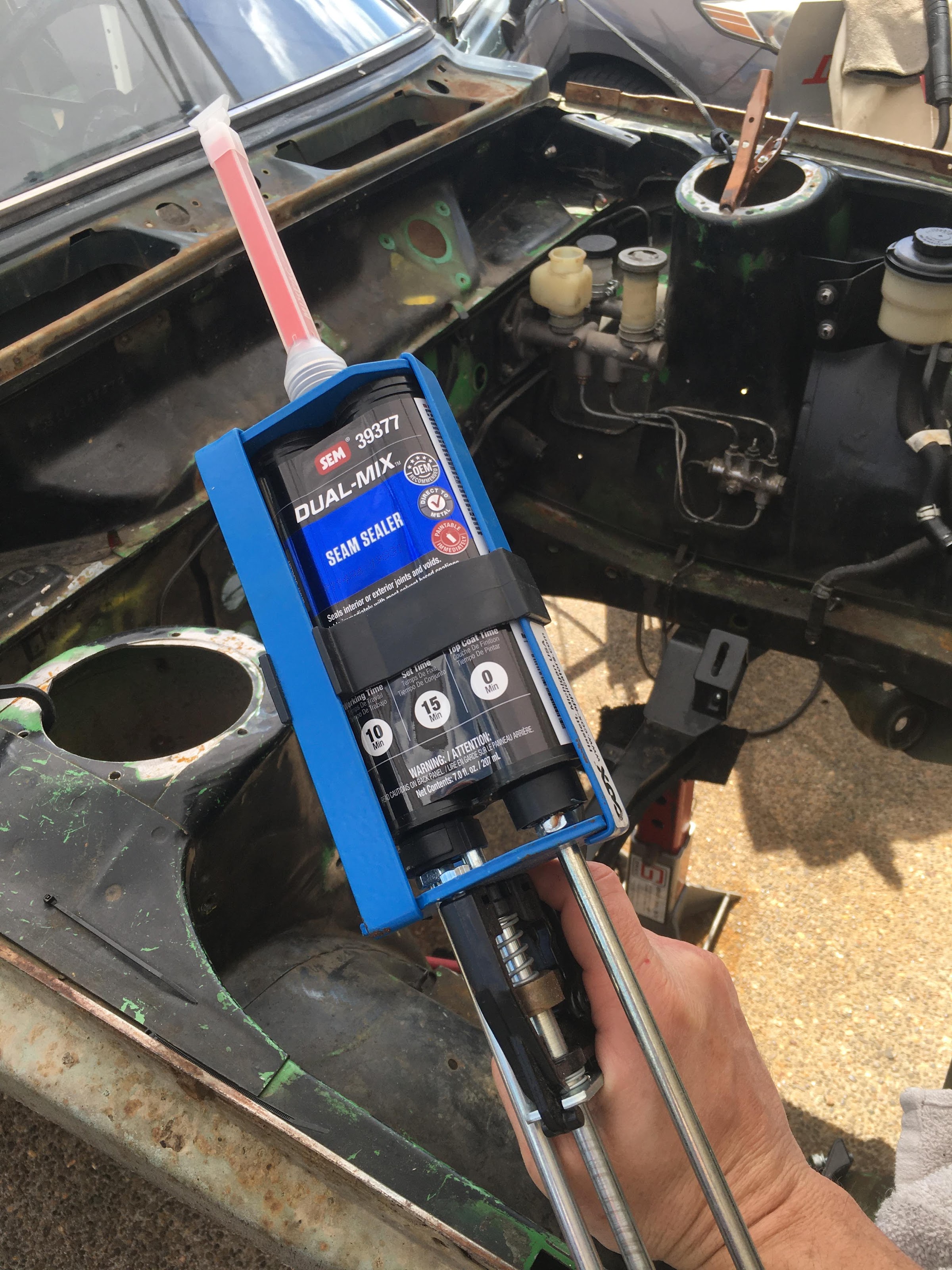 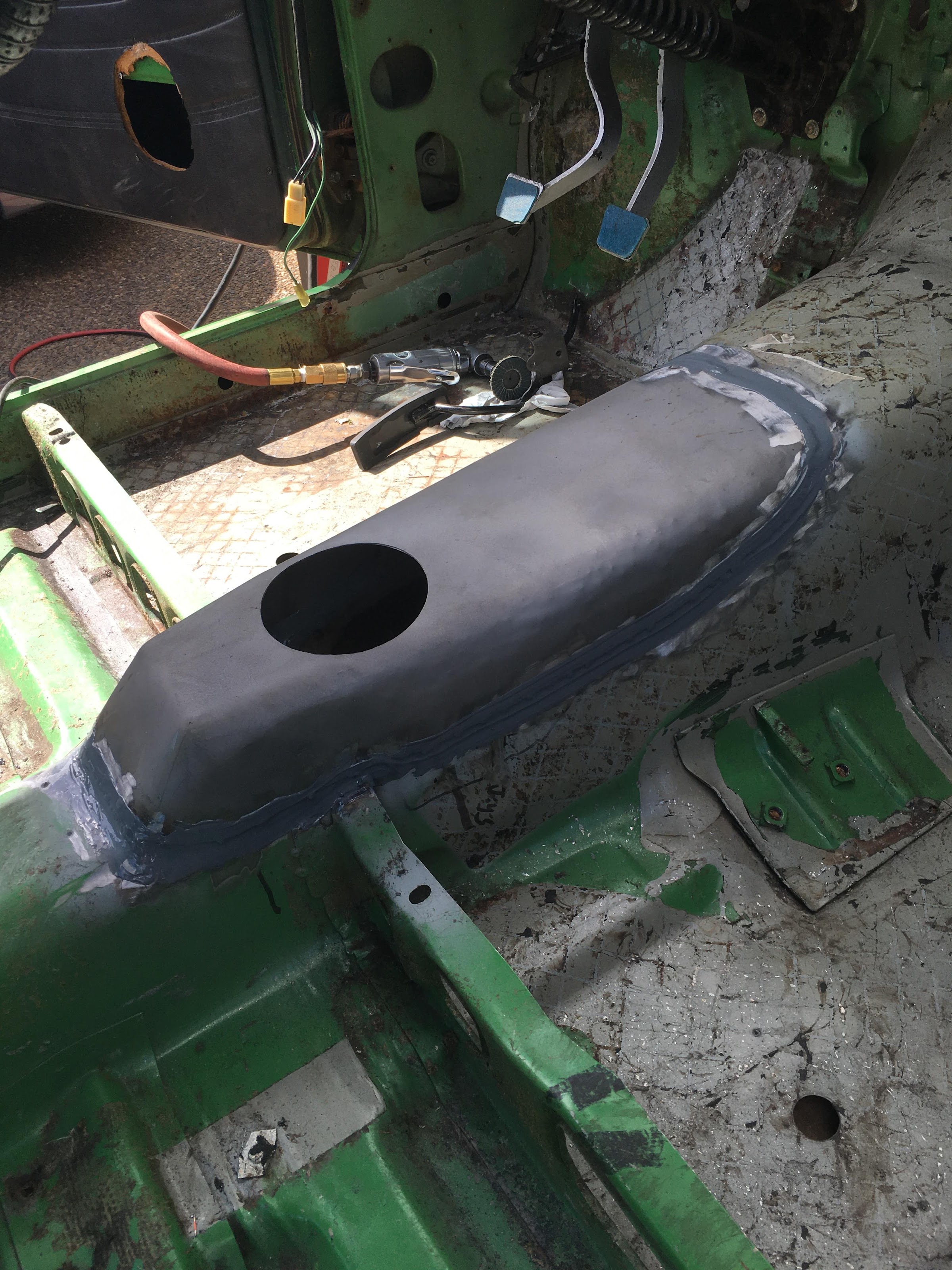 Eventually I will build a console for between the seats so the 'hump' won't be as noticeable.
Stu

nice job on the tunnel-- you went higher than me by about an inch it looks like-- BUT i didnt use the JBC pre made mounts - i bought their unassembled kit and shortened them- and used the bmw motor mounts that are soft--
on my sr the rear of the cylinder head is 1" below the cowl seam on my car (pass side) and the valve cover misses by about 1/4"
Mike Gibson
Datsun: 71 dime; 73 Z ; GT3 240
Other: 65 + 67 Mustang ; 03 murcie
Top

Thanks. I thought about modifying the mounts somehow, but a spacer was easier... So far the cross member has been my biggest challenge because I have decided to go with a power rack. Once I get that all 'done' I'll post how much of a hassle it is (not JBC's fault at all, they have been great). All I can say is I better love the power steering.
Stu