If you're referring to the VQ35de out of the 350z, q35, maxima etc (not being an ass just not sure if thats what you mean) there are some people who have done it but the modifications are very extensive and it's my personal belief that it's not worth it unless you have the tools and prior skills to tackle something like that.

You're talking about cutting into shock towers and generally a lot of fabrication that VQ is a WIDE engine, not to mention the hassle of flashing out VATS.
Top

My comment is the throttle " hang" also. Even with a SPRINT BOOSTER controller on mine, it still does goofy things, which from a true driver standpoint just sucks. I still stall this car at times leaving a stop on a slight grade! Maybe it can be made to work without all the electrics...but...
"Racing makes heroin addiction look like a vague wish for something salty" - Peter Egan

I've actually put quite a bit of thought/research into a VQ30 swap. It's feasible, but certainly not a simple task.

Pros: Cons: How I would do it: Running a modified KA tranny has several advantages: I never really entertained VQ35 because of the hassle/cost of NATS (which can be bypassed with a $1K USD wiring harness mod service), and frankly I don't want a 280-300hp 510. 220hp/Tq is plenty for me to get into trouble with, hell my 160hp KA is pretty damn fun as well.
'72 Datsun 510 - A little tired looking but loaded with goodies
'76 Datsun 280z - VQ35de powered project
'76 Datsun 620 - Project 635x, 620 body with G35x power & drivetrain
Creativity outlet: www.datsunrestomods.com
Top

So it weights the same as a SR? I'm going to have to borrow a scale from work and check that out. I have a 06 Z engine and a 01 S15 SR sitting in my garage. Might as well measure the KA also since I have one of those on the floor too. Yes my garage is a junk pile right now!!

I was amazed at how well it fit into the 510 engine bay and how well it cleared our rack and pinion crossmember. Here is a photo just for visual aid. At the time I didn't have a transmission. I also have a ECU that's had the NAT's removed. I got the deal from a drifter buddy. Who swapped to an LS2, I asked him if the LS felt faster since the VQ has lots of torque for a 3.5L with the adjustable cam timing and the LS doesn't. He actually said he couldn't honestly tell the difference and he spent over 10k having a shop build and install the LS. 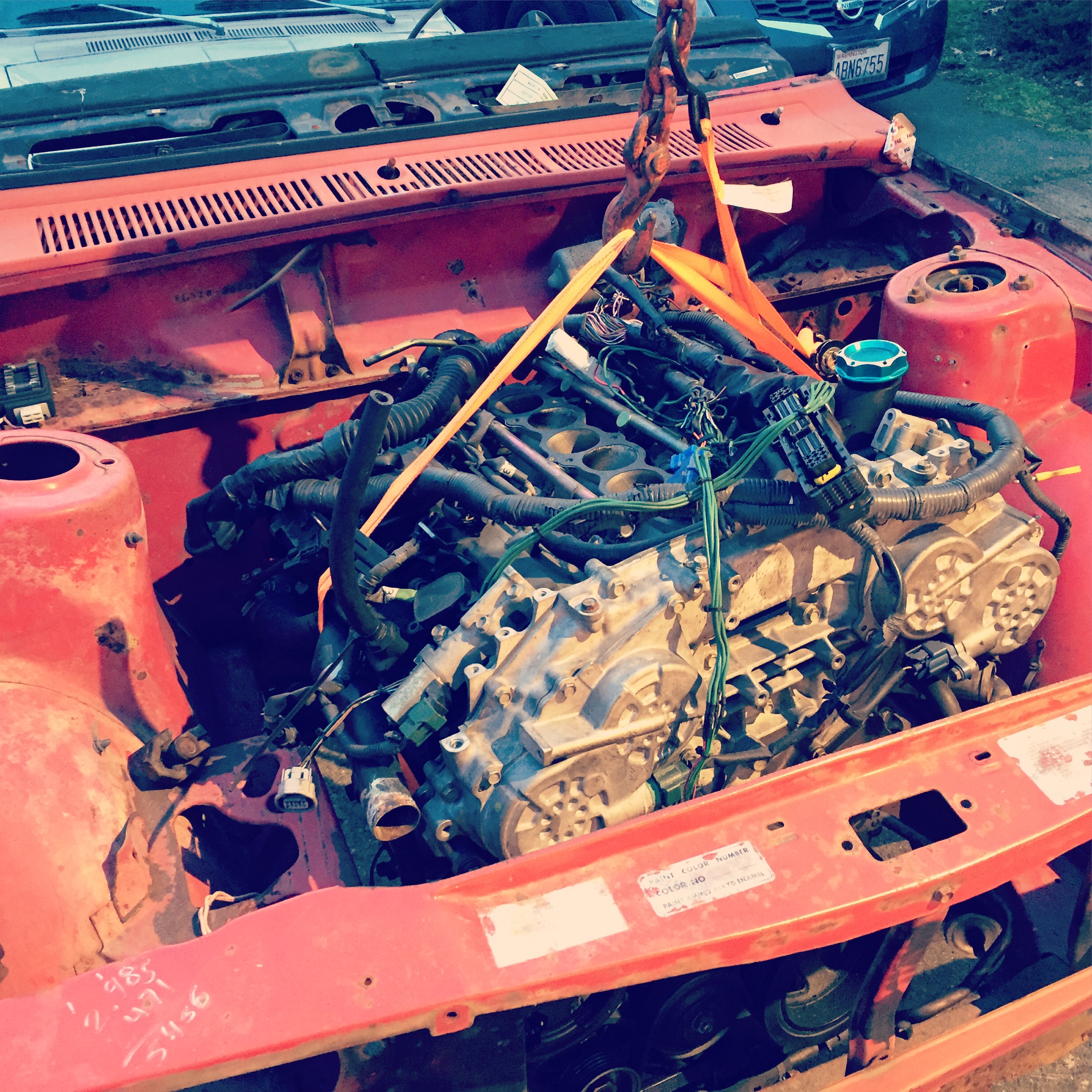 Yes, if you can please weigh all 3 and what accessories were included. SR turbo stuff (~25-30lbs?) will likely put it on par with the other two.

If possible can you take a pic of the ka tranny butted up to the vq block and note the obvious issues?
'72 Datsun 510 - A little tired looking but loaded with goodies
'76 Datsun 280z - VQ35de powered project
'76 Datsun 620 - Project 635x, 620 body with G35x power & drivetrain
Creativity outlet: www.datsunrestomods.com
Top

I am building the car for my wife and due to health issues I will need to go with an auto trani. I’m not concerned with having to modify the tunnel. I can do that. I had considered going with an LS2 but decided I didn’t want to have to cut into the firewall if I didn’t have to. It would fit width wise but pretty sure it’s long enough I’d have to lengthen the engine bay to accommodate it.
What rack and pinion set up are you using?
Top

Made a thread for the weight!

40lbs difference. Less then I thought. Still a bit though.

For the rack setup me and my good buddy Sam spent a couple years of our free time developing it. I'm not saying by any means we are done. Got a sack of new ideas for it in the garage. It can be found here. We got some data too if you are interested.

http://www.jbcoachwerks.com
"People don't like it when shit doesn't match their rule of thumb." Sam
Top
Post Reply
9 posts • Page 1 of 1