I have a dual Side draft SU throttle body that has been adapted to fuel injection. The engine is an L20b with a EI Dizzy. Originally it was adapted to use a chevy 1227747 ecm (OBD1) and it ran poor to ok. One day it just started running crazy rich, it seem like it was progressively getting worse a few weeks in advance but I can’t say for sure. The car would barely idle for more than 10 seconds, all plugs were fouled, any power applied would kill the engine. I checked the best one can that the coil had not failed, checked that there was still spark, pulled data the limited data from the ECU (sadly lost as someone stole my laptop). I had no idea why this was happening but was fed up enough with the computer that I decided to jump to a Microsquirt after debating going to Carbs for a long time (sadly there is now a FI itch that I need to try and solve). This computer has far better diagnostics and you can actually tune it. The general setup is the same but naturally there is a new wiring harness and I switched to a wideband. When briefly running the car I found the exact same result as with the previous computer. When checking the RPM signal I noticed there is an extreme amount of noise (You can get L series to 50000 RPM during cranking FYI). One, I know this needs to be resolved and two, think it could have something to do with my problem on the previous ECU. In discussion with DIY Autotune they suggested adding a 24V Zener Diode to help cut the noise down (Action for one). I will do this but started speculating that this could be what changed over time with the old computer. If that is the case I would like to try and resolve it! Has anyone had this problem before? Thought that come to mind is the black box on the dizzy has failed, the dizzy itself or the coil has failed (I do not know in what way this would happen). Does anyone have other theories? Any easy tests I can do? I have several spare black boxes and an extra dizzy I can try out, I would rather not buy another coil if not needed as I do plan on upgrading that over next winter.

by 510rob
Where are you taking your RPM signal from?

Where did DIY suggest adding a zener to?

by Beev
Signal is from negative side of the coil. See attachment.

Diode is inline to the positive terminal

Also I was able to find some old log files and this was for sure happening on the old setup but was not about a year ago. So something changed that is non ecu related.

by datzenmike
Matchbox is marked E12 80?

Coil must be 0.8 to 1.0 ohms and for an electronic ignition and NOT a points coil.

Try an HEI module from an older GM vehicle. 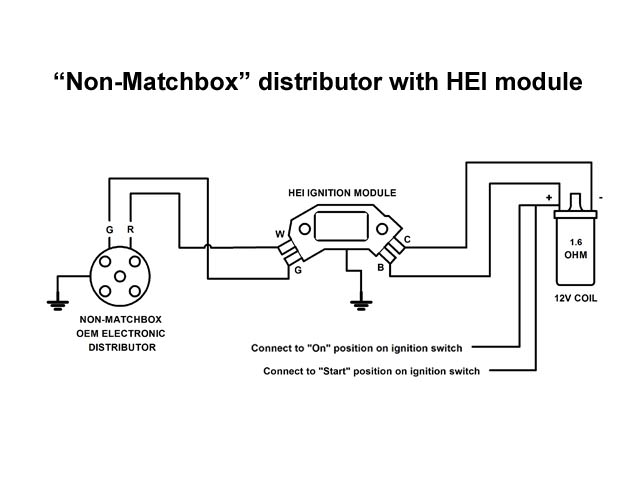 Two things to ignore in the above picture. Ignore the 'non matchbox' distributor
Ignore the coil ohms rating.

by Beev
I will check the marking today but how does that explain the changing noise in the signal with the current setup?


It's assumed you have the correct EI module but good to check.

Alternatively a cheap $10 HEI unit can be swapped to eliminate the EI module.

by Beev
So I double checked the matchbox and it is the correct unit. I also installed a spare one I had and it made no difference.

The coil I have is a blaster 2.

The transducer helped loads but still not enough.

I will look into the HEI but am still perplexed over what has changed over time. Thanks for you help.

by datzenmike
I don't like after market crap, too many unknowns and often inferior to the stock part.

You've changed just about everything so where should it be attached to? Maybe the + side of the coil?
All times are UTC-07:00
Page 1 of 1
Powered by phpBB® Forum Software © phpBB Limited
https://www.phpbb.com/