I don't want to steer away from your project but me and a buddy drew the full rear suspension of that car in solid works because we want to make a narrowed version for our datsuns. Since you are into solid works and engineering I wondered if you noticed the rear uprights are over defined, to define a plane you need three points, those stupid uprights have 4! Even using the CMM at work we couldn't make the stupid drawing happy. Not that I expected to.... Anyways here is a pic for fun. 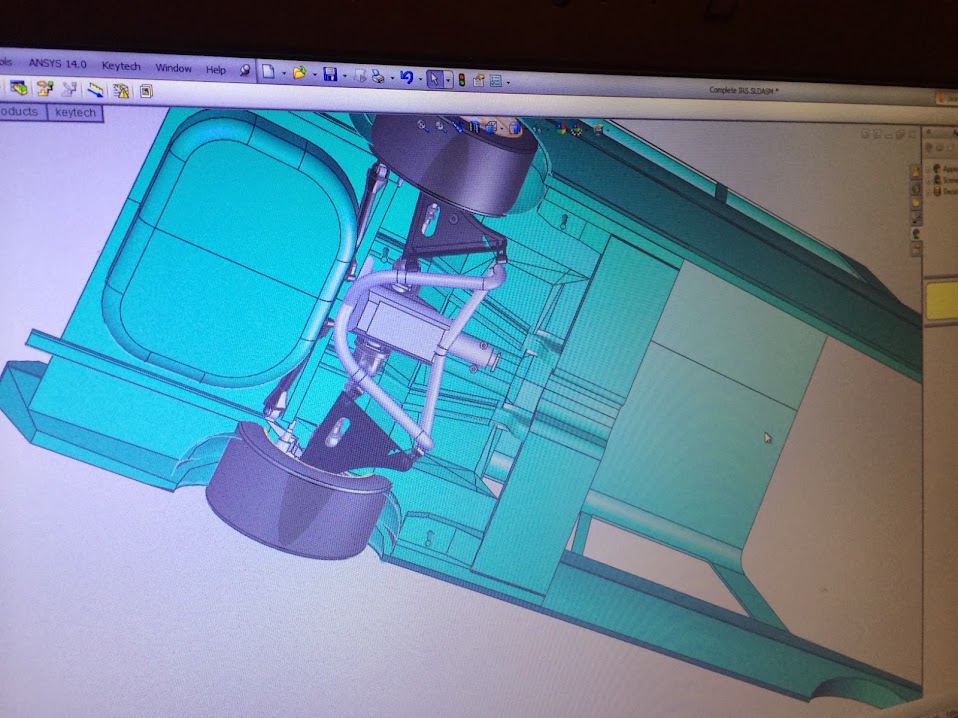 Wow thats cool. What was so unhappy?
An Idea doesn't work unless you do.
Top

The rear upright is connected to 4 arms. Lower control arm, upper control arm, traction rod, and toe arm. I'd assume the software can't deal with trying to plot the trajectory of the upright based on 4 arms in 3D space. It's overcontrained.

What! You know you want a narrowed bolt in sub frame in your s14 so you can run some gangster rims!
"People don't like it when shit doesn't match their rule of thumb." Sam
Top

Bought some silver vein powder today and gave it a try. I'm very happy with the results and should be doing the subframe this weekend. 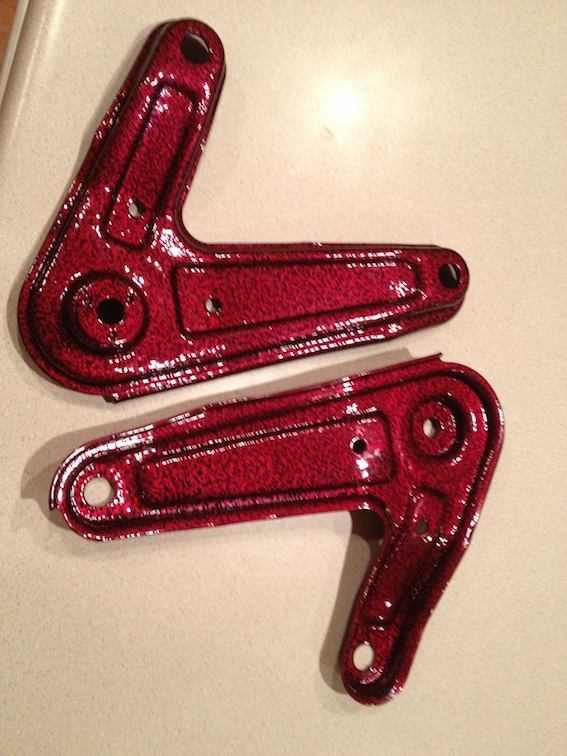 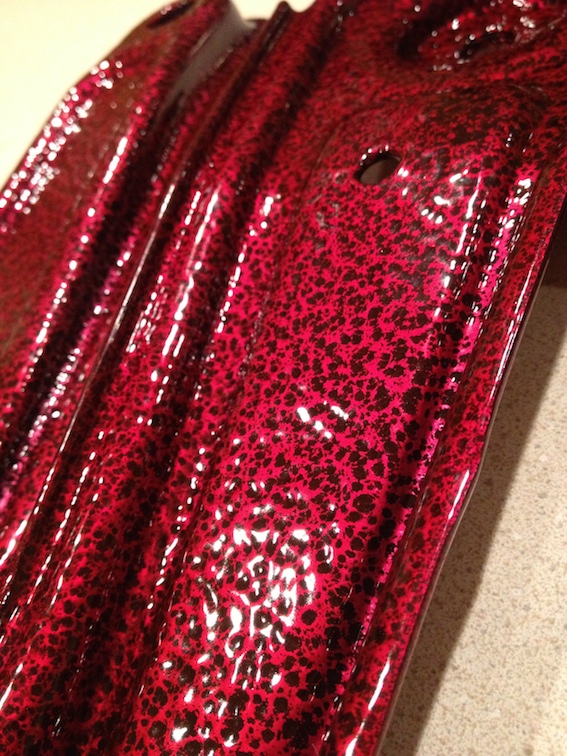 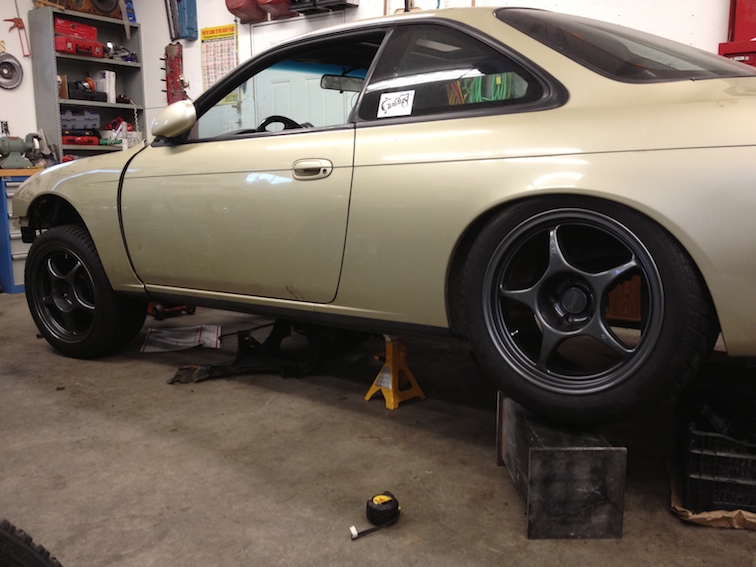 Made some serious progress this weekend. Finished blasting and powdercoating the rear subframe. Big thanks to my friend for getting me some oven time!

Once I had the subframe home I immediately popped in the solid subframe bushings/risers and the diff bushings. Chased all the captive nuts today and slapped all the stock arms back on there. The GTR diff bolts in perfectly as do the GTR rear brakes with rubber lines and all. I assembled the GTR hubs/ebrake on S14 rear knuckles and installed everything with the rear coilovers. I was very happy to discover that the rear rims with the 275/40 tires fit great in the rear. A mild roll may be required for tire clearance. 275/40 is a bit tall but it's what I've got for now. Ideally I'd run something like a 255/40, 235/40 stagger.

Used some sweet industrial cleaner pops had and a pressure washer to do the underside of the car and the engine bay. Clean stuff is so much nicer to work with! Redneck tools are useful for getting a car in/out of the shop when it doesn't have wheels on it haha.

Tomorrow I'll be swapping the RB20 front crossmember in and cleaning up my S13 rack and installing it. The other front corner of the car will get its coilovers as well. 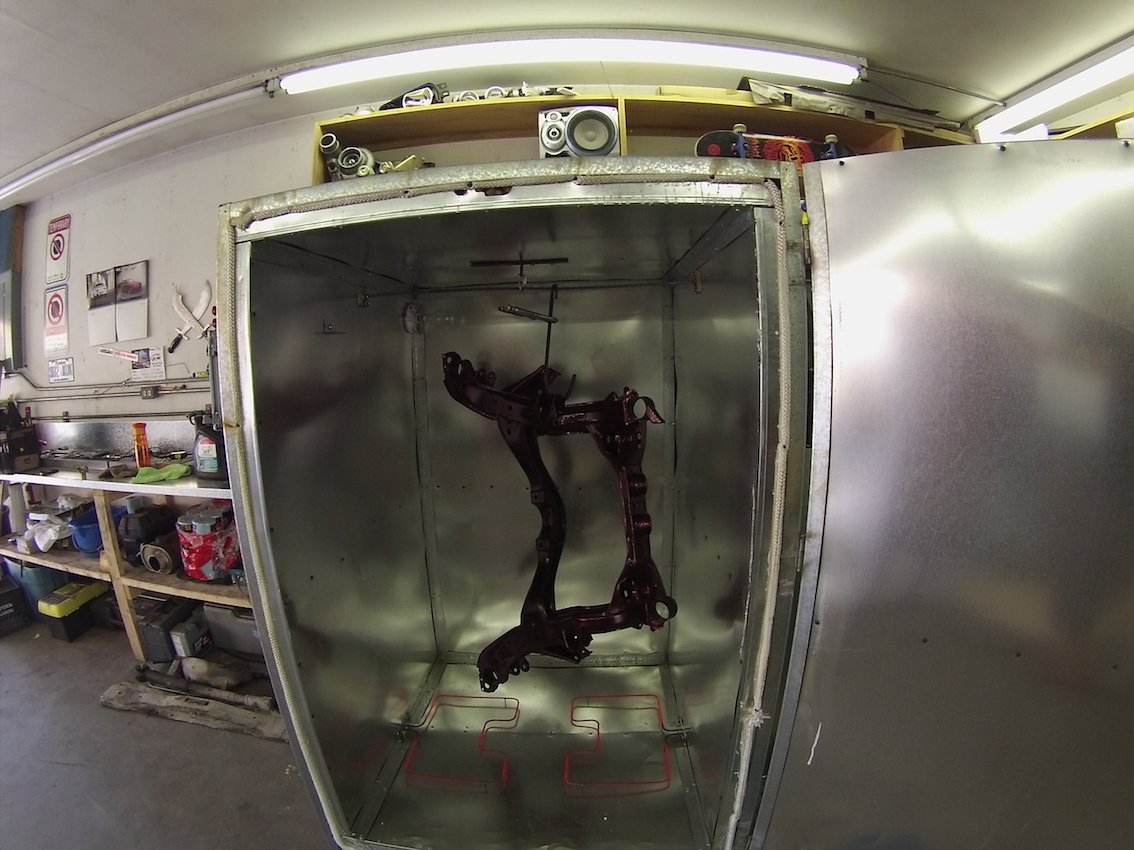 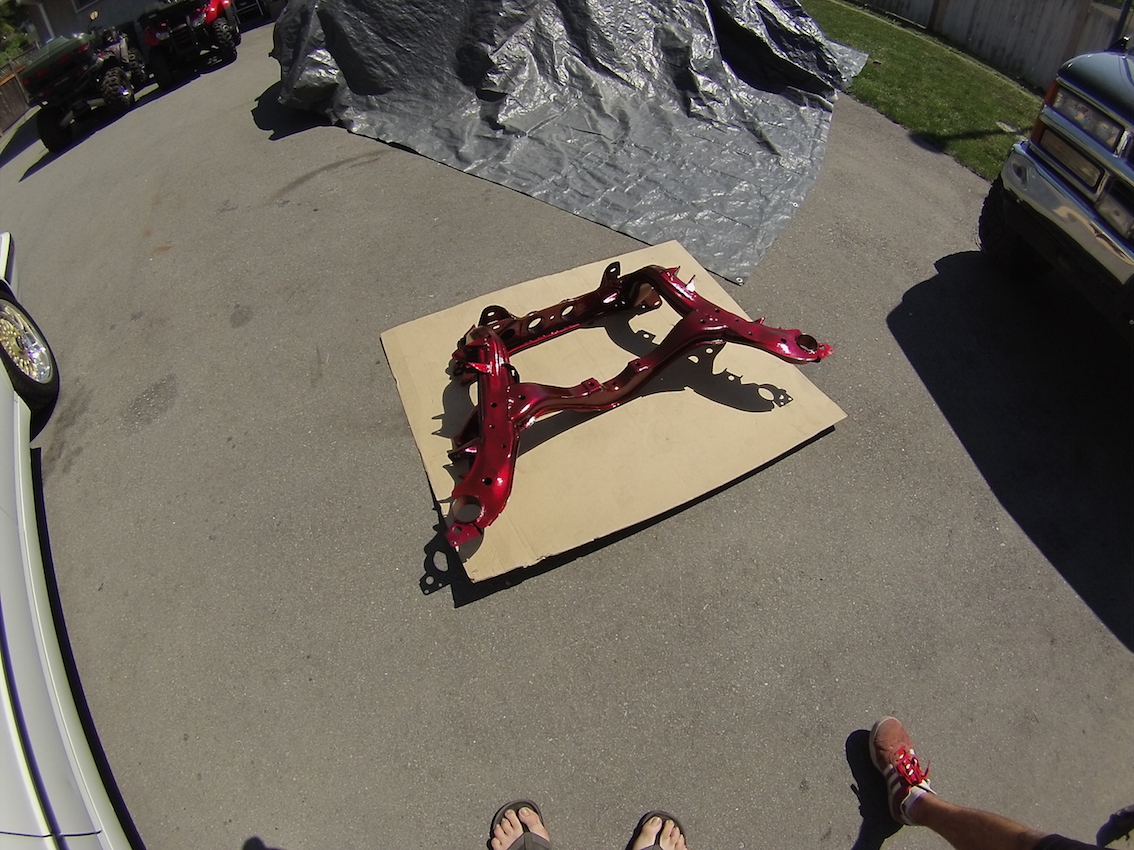 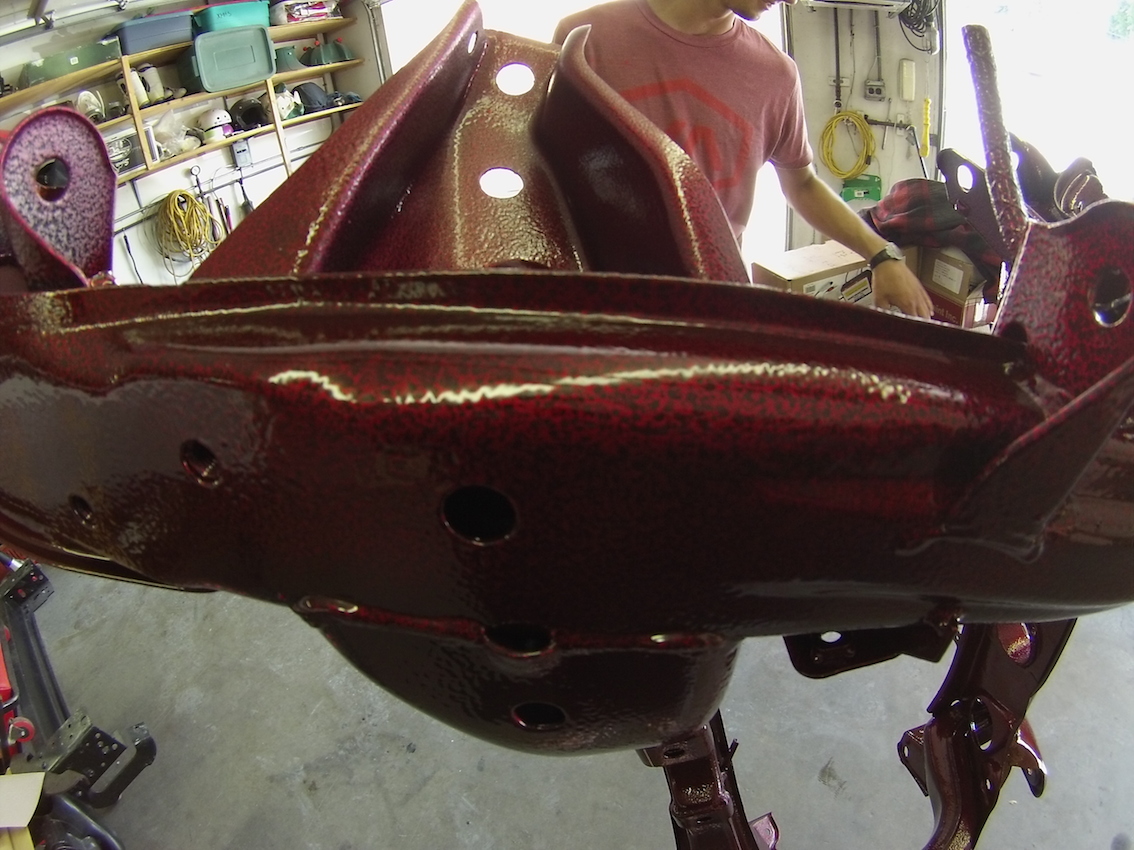 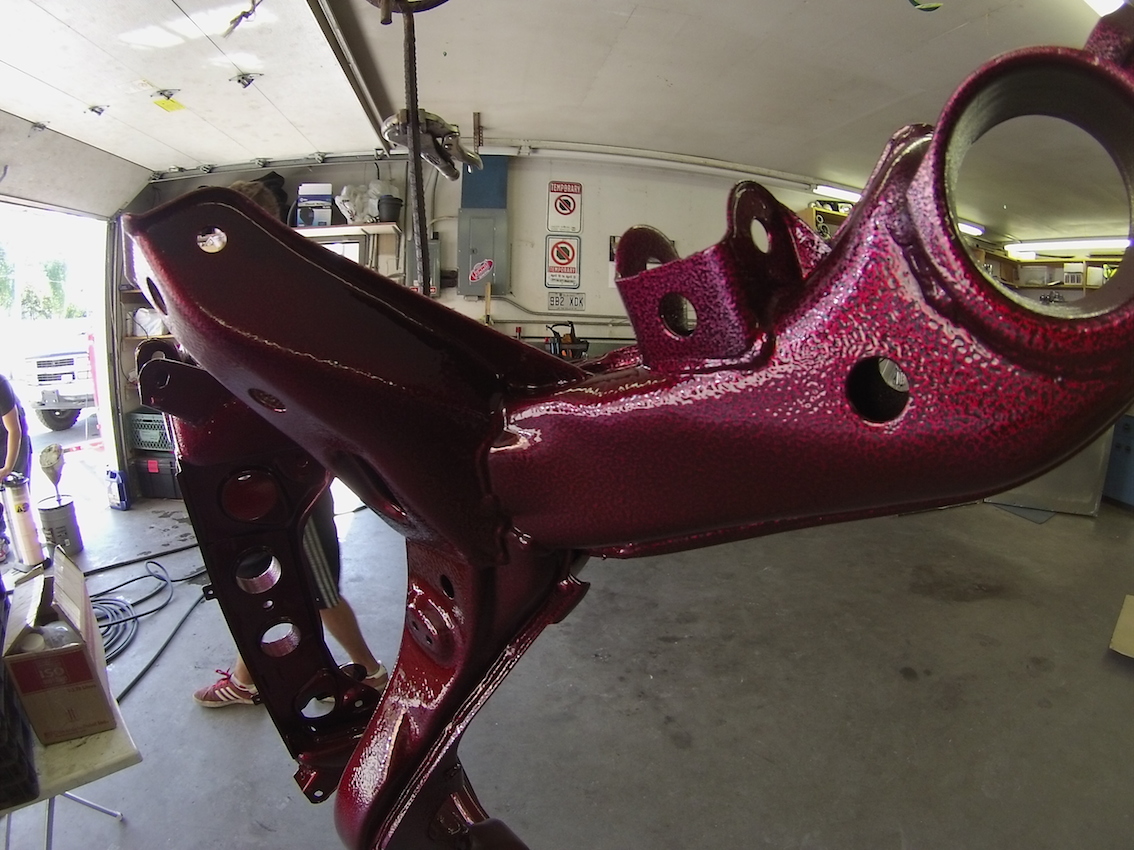 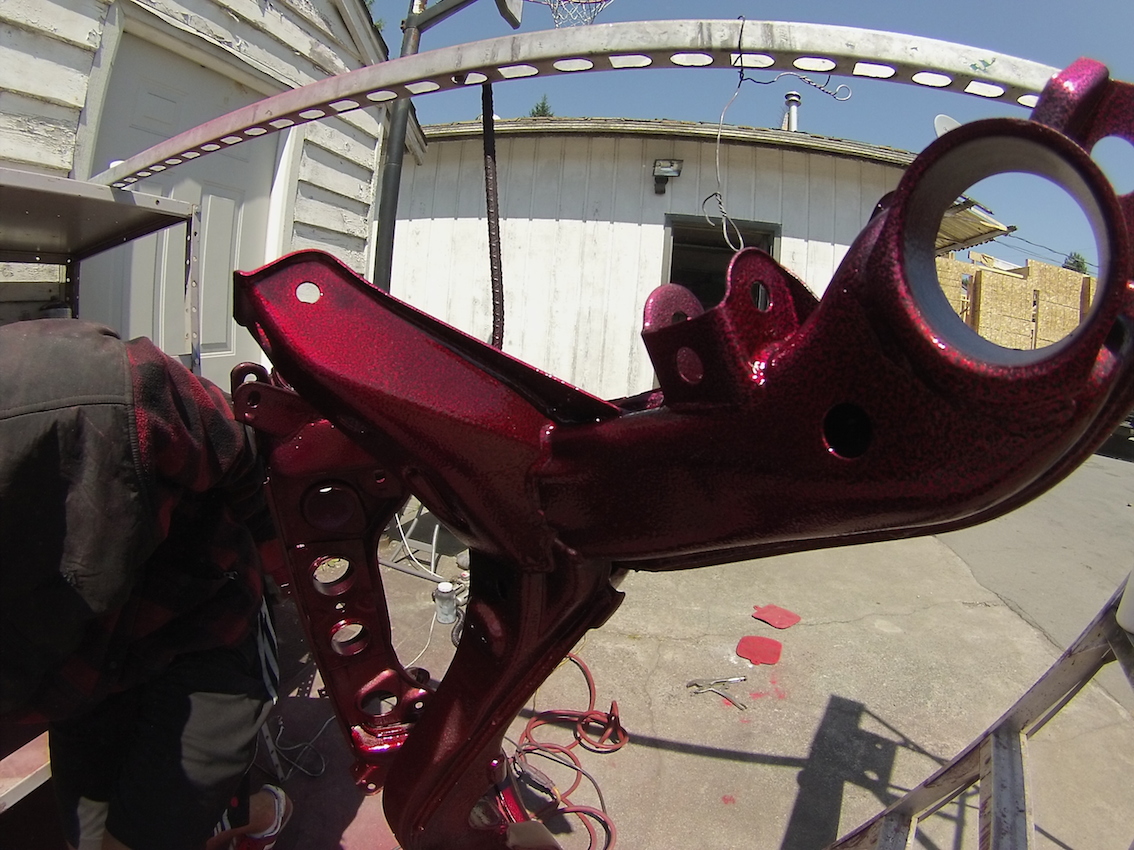 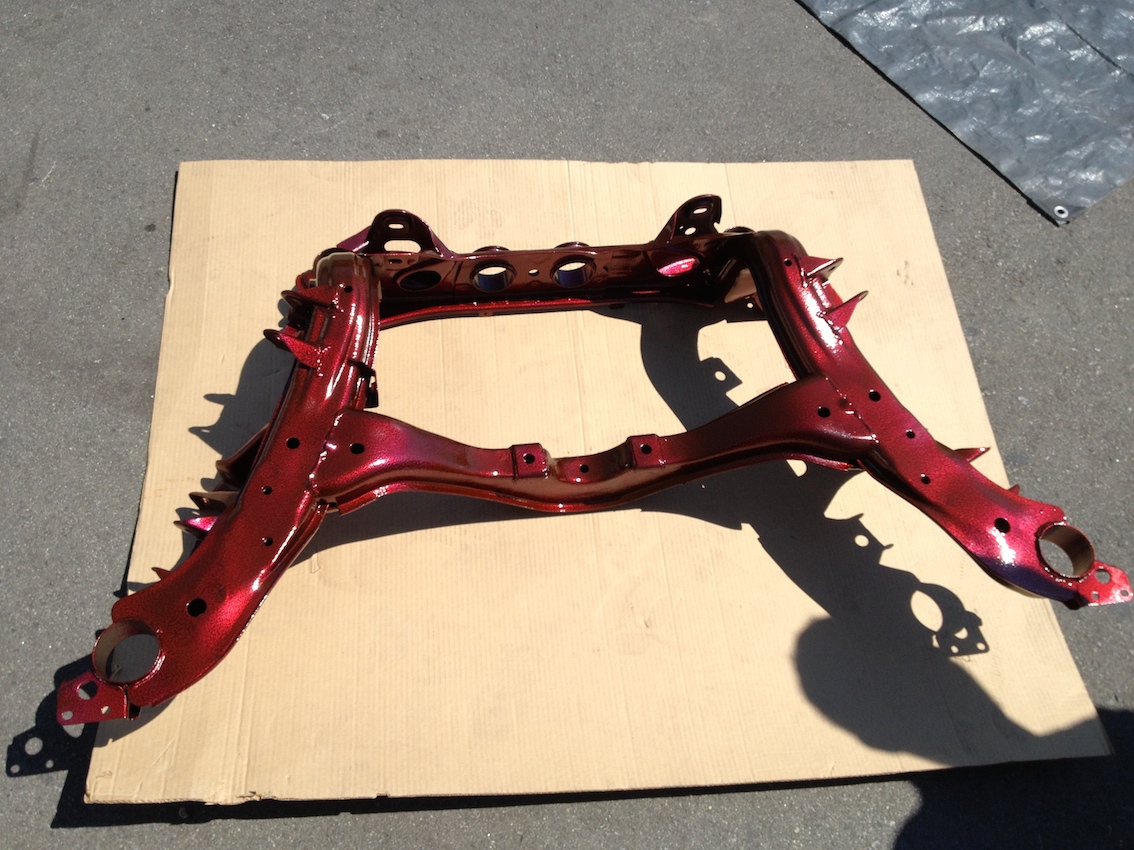 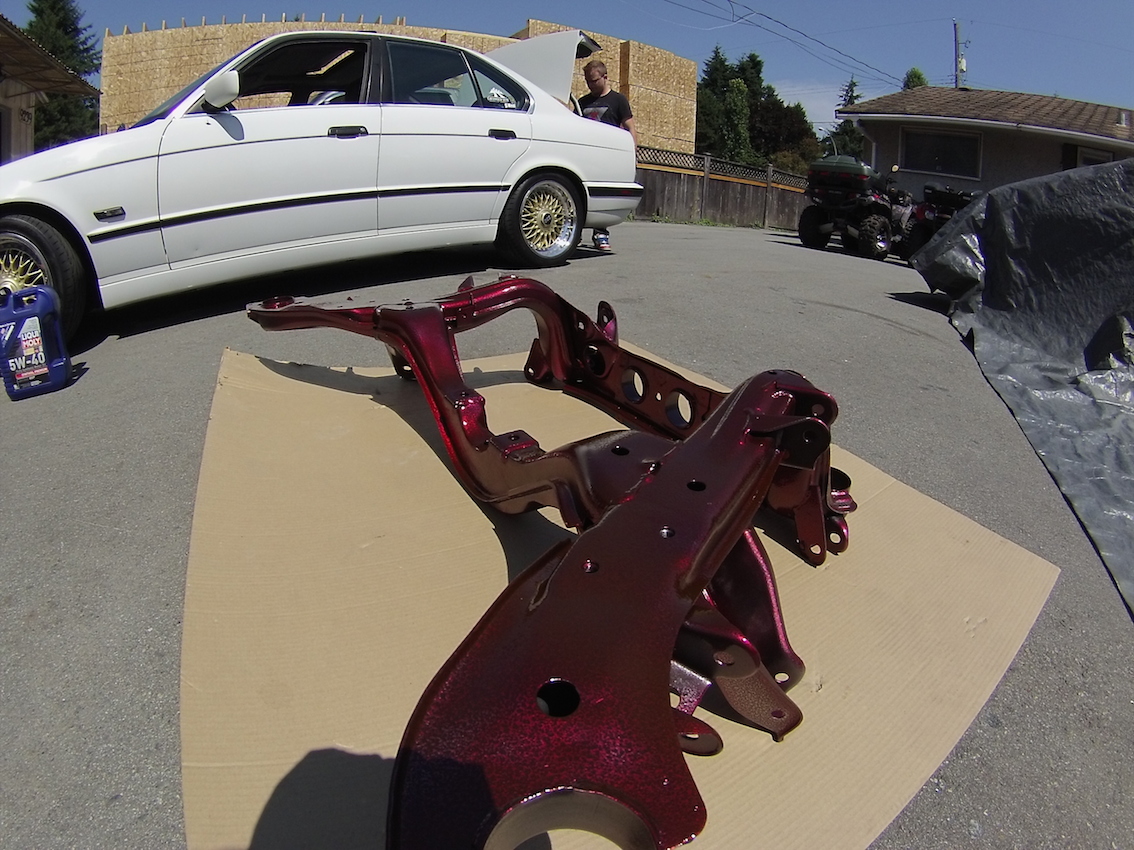 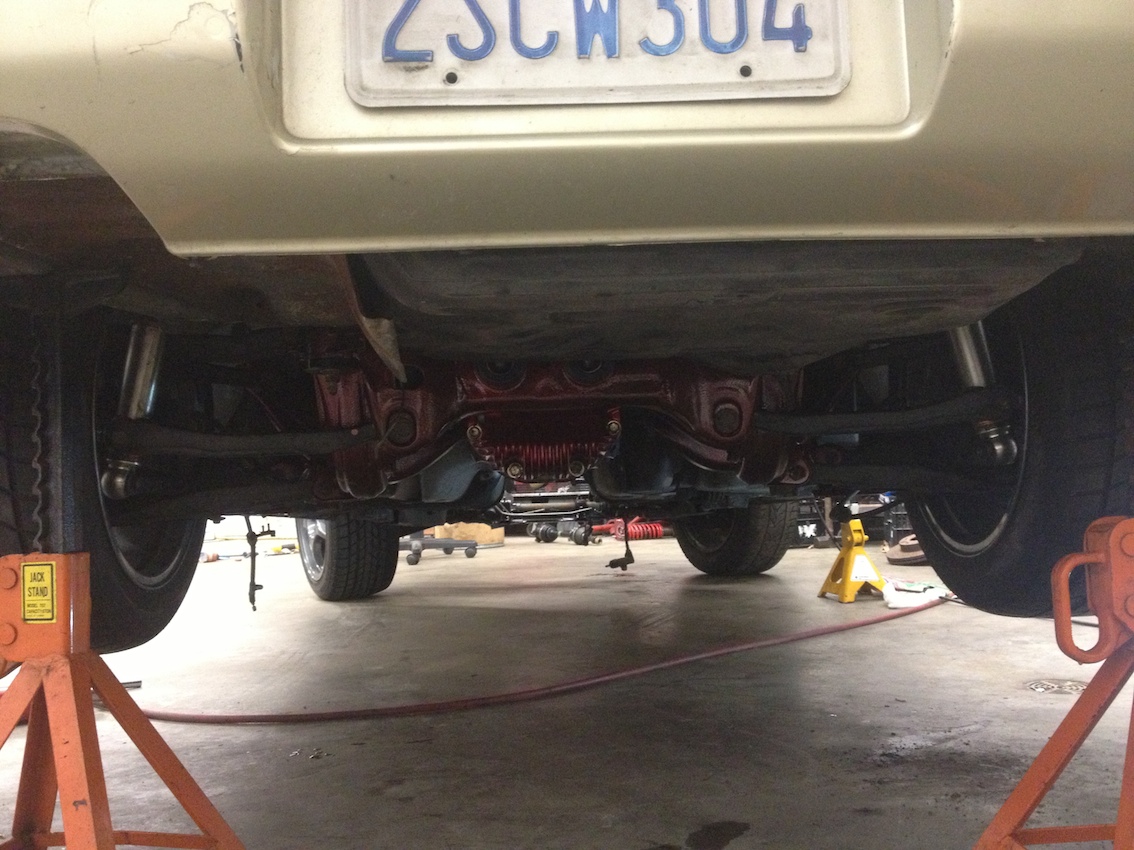 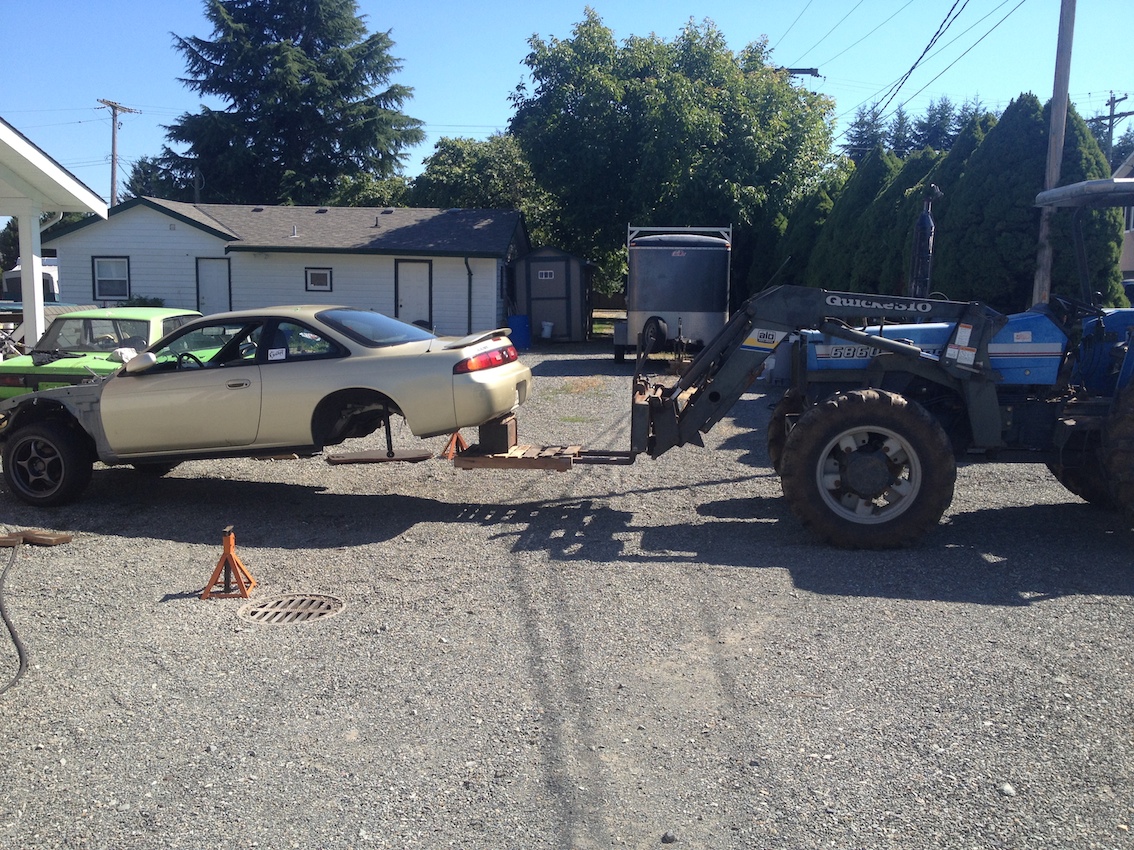 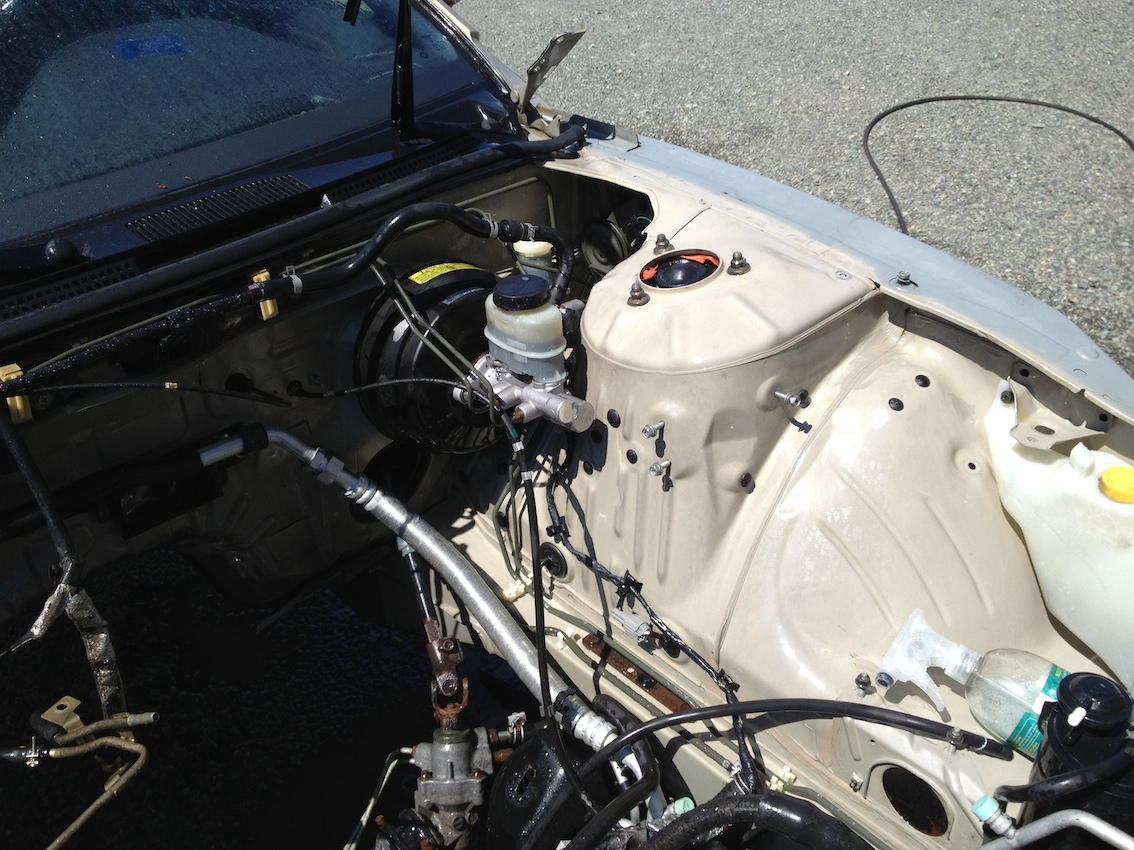 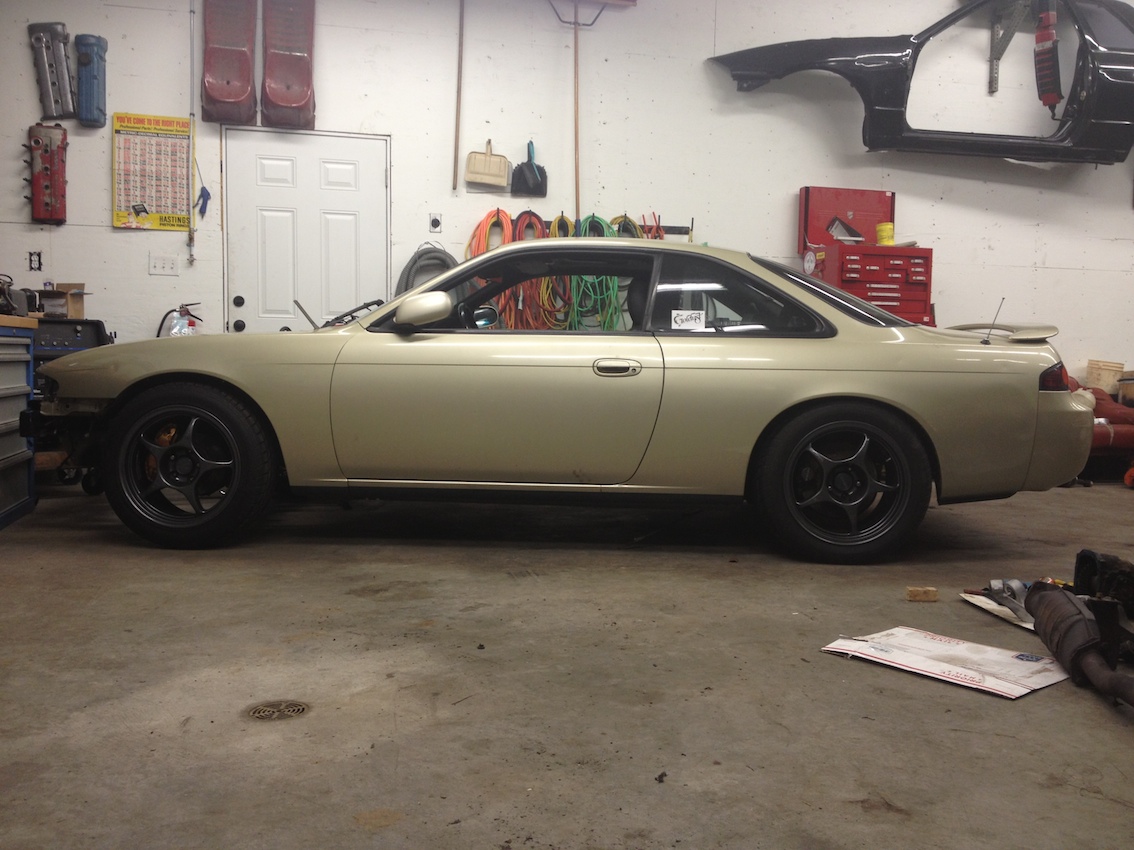 Hey, is that's Noel's old 2-door in the back ground? Did you buy that from Owen?
Top

The sleuths of the Realm found me

Finished another semester and had some time to do a bit of work on the break.

Got some 2WD RB20 upper engine mounts to mate with the GTR rubber engine mounts. This works well, 4WD mounts don't work. On the exhaust side on the motor, one of the oil feed lines needed to be rerouted to clear the mount and the turbo brace no longer fits--I'll have to fix that later. On the intake side, the mount is right tight to the oil temperature sender so I can’t get a plug on it currently but I’ll be reworking the upper mounts to place the engine back another ¾” ish so I’ll regain access to the sender.

I made a little cart with some crazy wheels that bolts to the RB20 crossmember and a single crazy wheel with a standoff to bolt onto the rear of the trans so I can roll the motorset around. Took the entire front suspension and TC rod boxes and radiator mounts off to give me lots of room to drop the car on the engine. I did the install easily by myself in a few minutes! About halfway through the install I realized that the brake hardlines coming out of the master were going to interfere with the rear turbo outlet (they are really close on Jesse’s car). I pulled the lines out and used some heat to coax the bends a lot tighter and it all fits with about ¼” of clearance but it’s soon to grow since I’ll be pushing the engine back a bit more.

Picked up my rotors the other day but haven’t drilled to 5 lug yet so I don’t have pics of them on. GTR rims don’t clear even with a 10mm spacer. On my relatively accurate bathroom scale, the rotor weighed 14.8lb (compared to ~17.5lb for a Z32 30mm rotor).

I messed around with my power steering a little bit. After taking some measurements and realizing that an S13 KA24DE Hicas power steering pump I had kicking around shared the same offset as the R32GTR pump (also hicas), I sold the R32GTR pump and bolted up the S13 pump after pulling the vanes out of the rear half of the pump for Hicas delete. I used the RB26 power steering pump bracket, RB26 tensioner arm (spaced forward ~3mm), and RB26 tensioner bracket to the pump (enlarged 2 holes from M8 to M10).

I’m currently working on the wiring and am about 80% finished. It looks pretty daunting but once you get in there it’s all good! I swapped the RB26 coolant temp sensor (for the gauge cluster) for an S14 KA one so I can have temperature readings. On the engine harness I’ve relocated the resistor box for the low impedance injectors, stock boost solenoid, and the MAP sensor for the GTR DIN gauges behind the passenger strut tower where the cruise control module used to be.

Due to the 3” piping that has to go through the stock battery location, I’ve taken out most of the battery tray and left some so that I can run something small like an Odyssey PC680 half battery (7.15 x 3.00 x 6.65”) tucked against the outside. Spot weld drill bits do an excellent job of removing factory sheet metal.

I originally planned to run a custom 1 or 2 piece driveshaft using the GTR32 companion flange/CV at the tail end of the propeller shaft but the rear subframe risers have pushed the flange right into the ebrake clips. I’ve now got an S13 non ABS companion flange for the diff so I can run a cheaper aluminum 1 piece driveshaft. Current plan is a unit from shaftmasters.com.

I ordered a pair of replacement HKS filters and a pair of R33 ebrake cables so I can get my rear setup mostly dialed in. Next on the list is finishing the wiring and fabbing a transmission crossmember.

I was wondering what you were going to do with the twin cam 8..... Did you find that you could bolt one of your manual transmissions up to it?

It's gonna be my new coffee table.

Lots of adaptors out there... Some pretty sweet S chassis cars on V8nissans.com though.

Plugged in the ECU tonight with no sparks. So far so good... It runs the fuel pump and I've got power at the injectors, coils, 02 sensors, CAS etc.

How did you end up purchasing that GTR ? I have researched several times about importing and it seems to be a never ending battle. I know Canada is different than US, but just curious?
looking for pass. side arm rest
Top
Post Reply
92 posts