The engine is immaculate!
Top

Not today but a lil while ago Taka from Kyushahouse visited me and helped me sort out a driveability issue on the Mikuni's on my wagon. Found a vacuum leak on the intake manifold gasket but also replaced my accelerator pump jets and the engine/car drive so much better now. Taka is super chill and pro!

I also replaced the cap/rotor/plugs and ( NGK) wires since its been a while and tried those E3 plugs for curiosity. They work but basic NGK plugs would've been fine.
Top

Over a couple of days I fitted my front T3 suspension components, gave it a clean and fitted my Watanabe wheels. 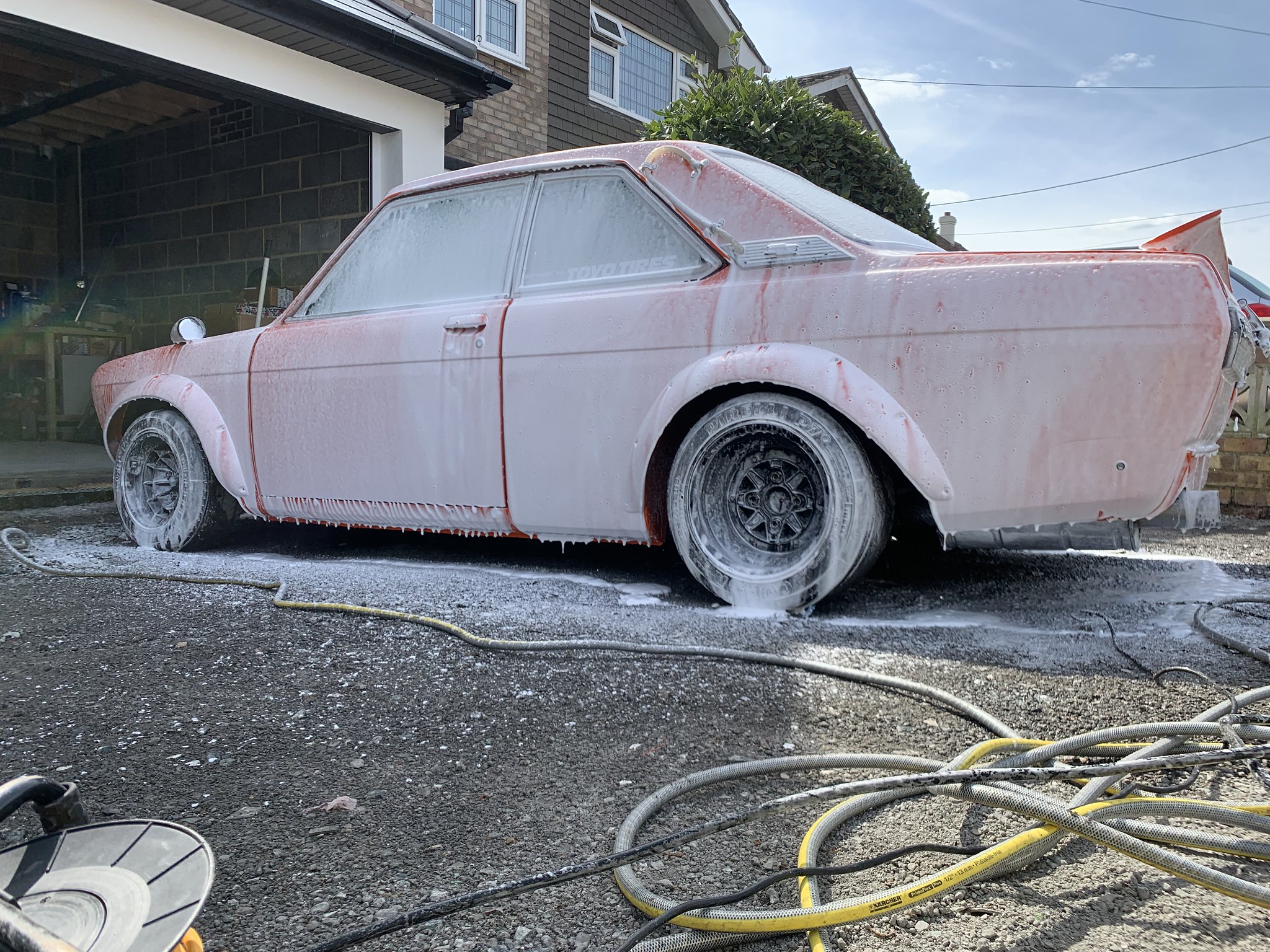 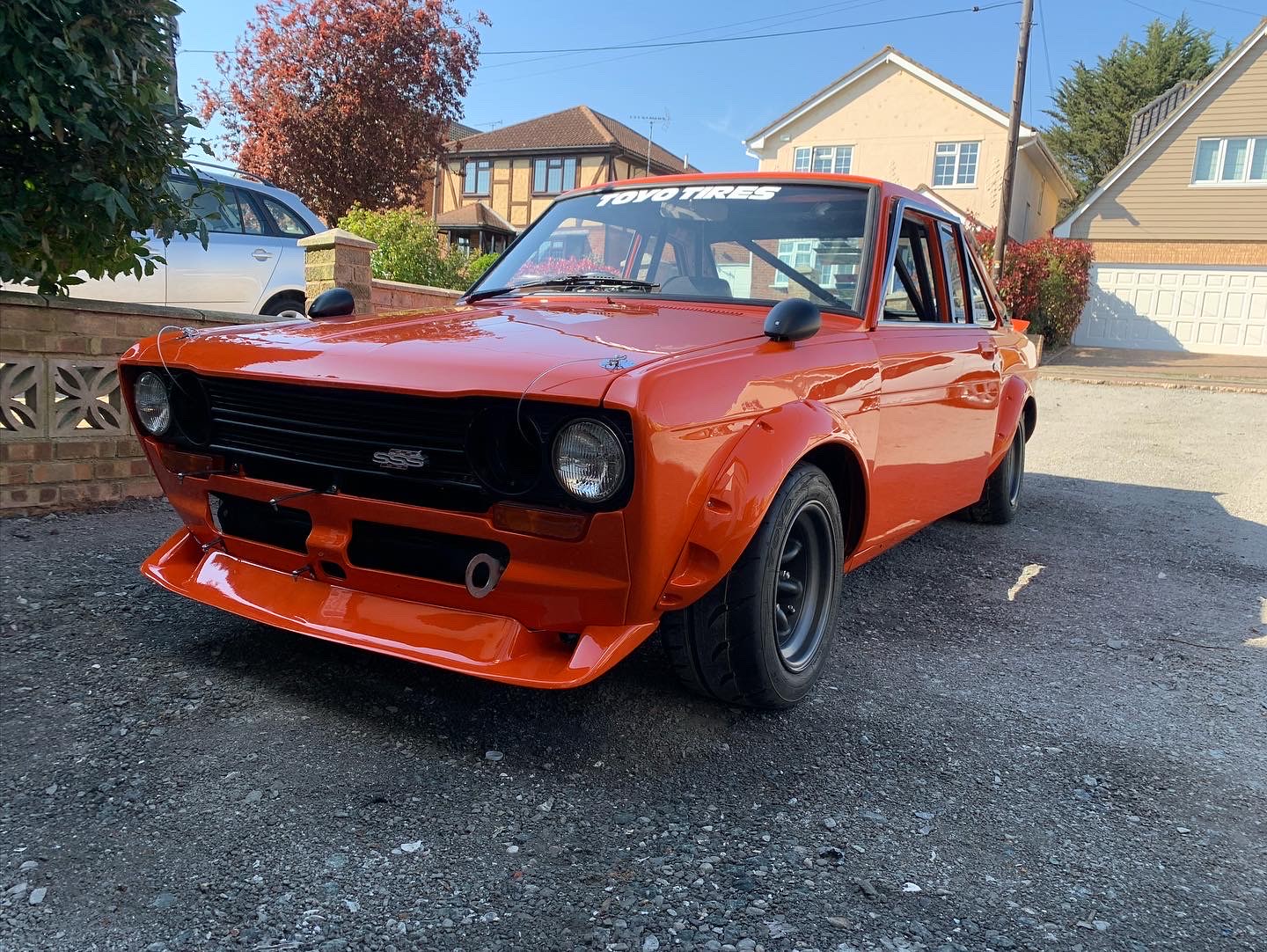 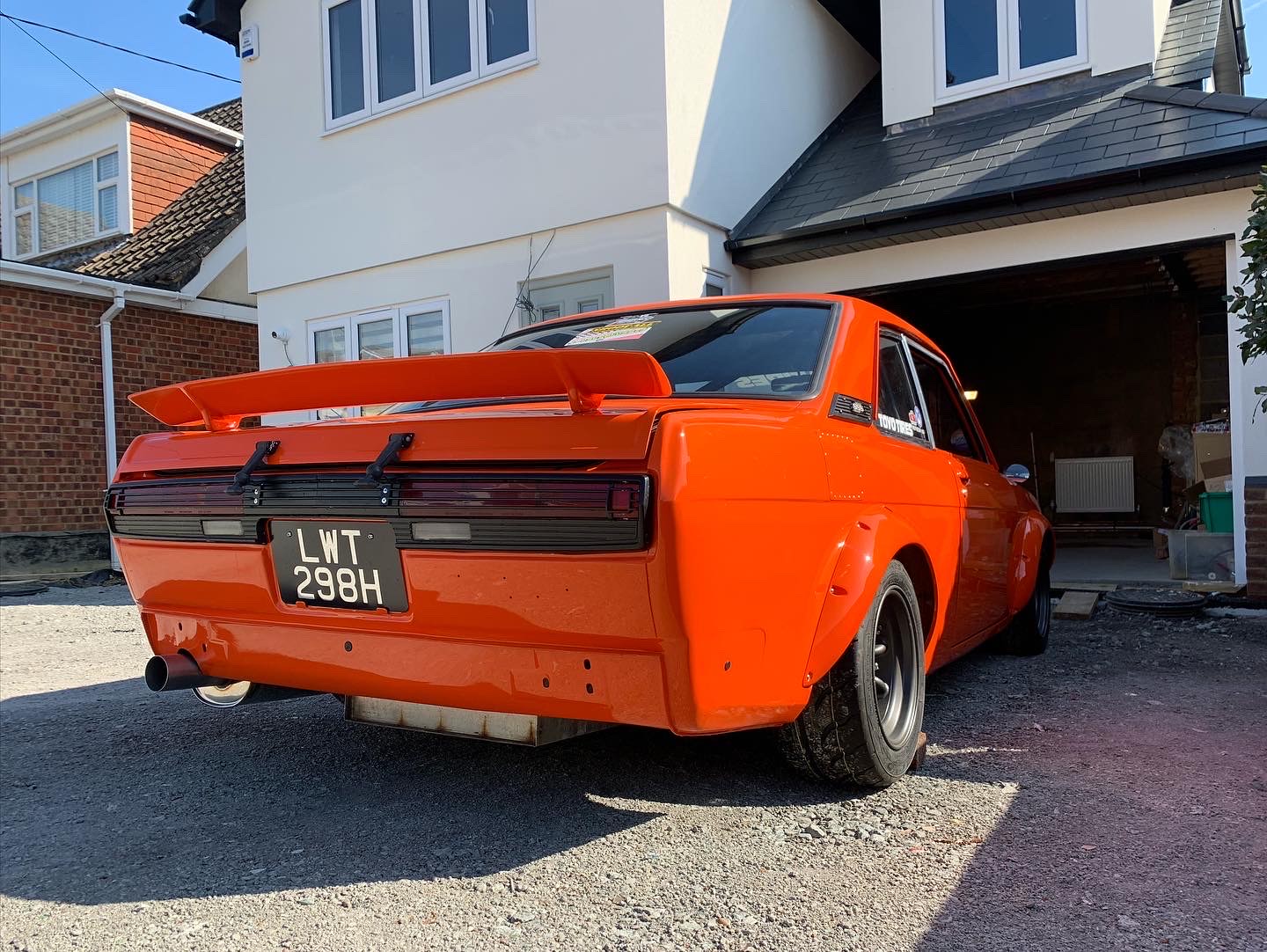 I also had a custom one off Kameari Engine Works L4 cam cover made up. They didn't take much persuasion/ 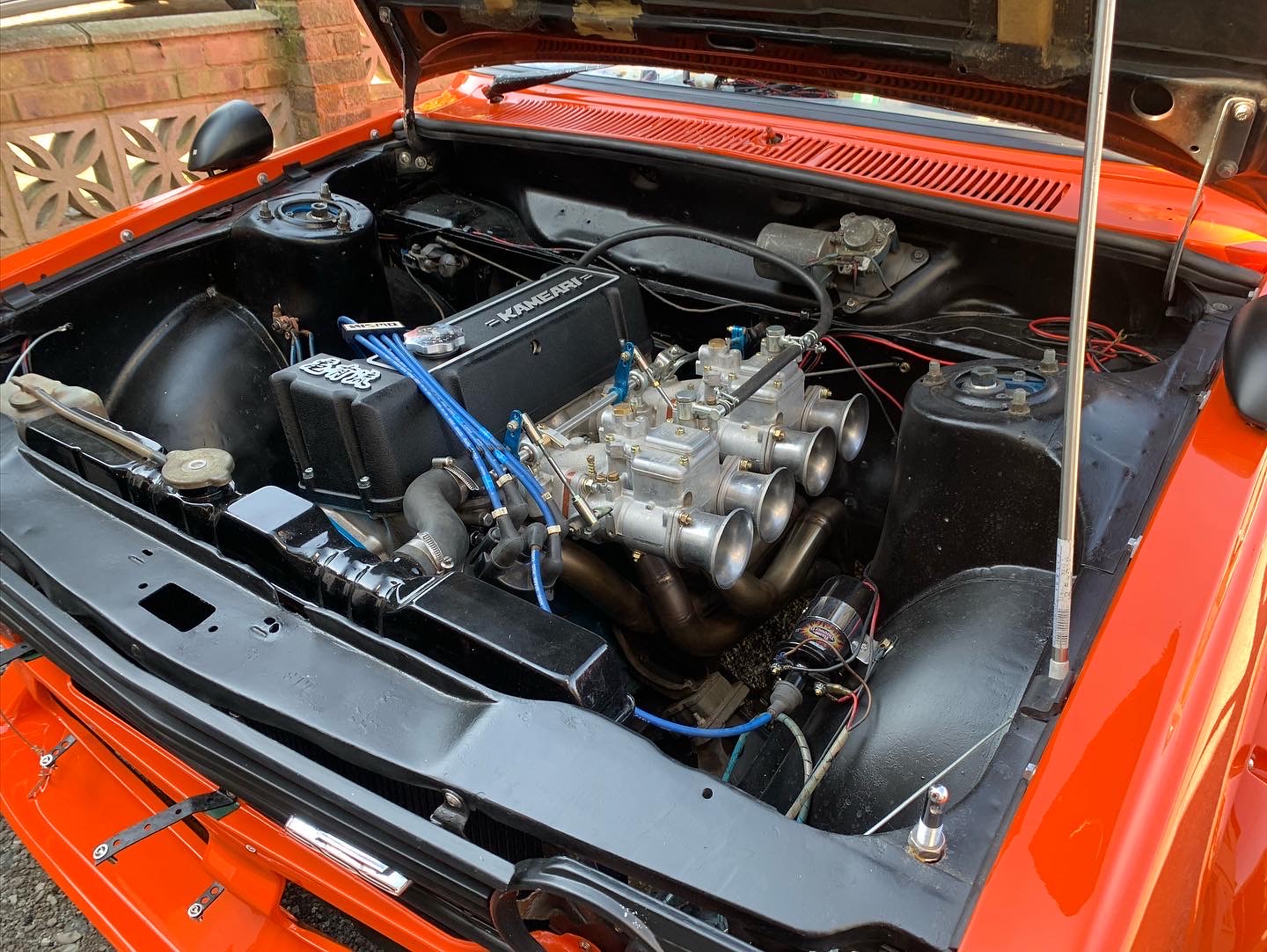 I really wanted it finished by now for the long bank holiday weekend in the UK but I've still got parts being re furbished and will need to outsource some jobs I don't want to tackle.
My P510 Bluebird SSS Coupe www.the510realm.com/viewtopic.php?t=26929
www.kikiichiban.com
https://www.instagram.com/kikiichiban/
https://www.youtube.com/channel/UCBP1x8z2IBvfs-MQH2Gc73Q/featured
Top

Yesterday, I did the most dangerous thing I have done in my life.....changed the 510 oil in my son in laws pristine garage, the unmolested garage floor waiting for a mishap! I had a ton of those disposable bed covers jammed around and under the oil filter and cooler adapter. The oil catch tray was on cardboard and more pads, where, as I undid the plug, had to be so careful as the weight of almost 7 litres of oil came gushing out.

Then, to drain the oil cooler, I had to angle the bottom hose down through the engine bay, to hit a very small opening to the oil tray.

I tried to be as slow and safe as possible, that side mounted oil filter makes such a mess. Sucess for the most part, except..I have not used the cans in a long time and when I grabbed one, to tilt into the funnel, the can squished in a blorped a couple of table spoons of oil out onto my intake manifold and ignition wire loom...REALLY!!! NON hit the floor at any rate.

Re-fired the car and topped the oil up, ready for whatever season we get.

I also checked the moisture content with my cool little instrument, less than 1% in the brake master, but, I had not done the clutch for a few years and it showed, almost 3%. I will get someone to help bleed clutch and brakes soon, hopefully before 510 day and the car is still on jack stands.

No apparent leaks anywhere, car started in an instant so that was great, after almost 2 months since last fire up.

Today drop some new batteries into my two small temp gauges, lube the heim joints, top up methanol and check that system for function. I also will pull grill and check that the water spray covers the entire intercooler face. I have some fall leaf debris in the bottom of my fans from last years fall drive, so need some compressed air to blow that out and straighten a few radiator fins.

I noticed too that my brake cooling lines have both failed in a couple of spots so will order some new aircraft hose today. They owe me nothing at this point, been in service since I built my front cooling ducts back in the mid 90's. That stuff is NOT cheap, yikes!

Not going to insure car for Tuesday unless I see the weather will be good. Last year I did not insure till June 17th, as our spring weather was crap, covid restrictions, etc.

Do you manually fill your oil cooler and lines prior to startup or just let the pump handle the air?

I try to fill the oil filter as much as I can, considering it goes horizontal, and no, I let the air just purge out on fire up. Oil pressure comes back very quickly when re-fired. Done this forever so I guess I have been ok, 21 years on this motor. That oil cooler is actually a GM Cadillac air conditioning unit, very efficient and small tubes in terms of volume.

No fuzzy's or bits on the magnet so that was good.

Today I changed out my water spray nozzles to cleaned ones. They are .020" opening so very small, these "misting nozzles" work well but do kinda plug up over a few seasons I guess.

With the grill out I did some more bug cleaning and fin straightening on the rad, need some compressed air now to back blow the rad.

I see my rad catch can needs some draining also, and then top up rad again. I should see my new brake cooling hose this coming week.

Topped up my methanol tank and hopefully my son will help me to check that the solenoids are working in that system. I have to pressurized the tank and then, with my bore scope snaked up the air intake, I can see the spray from the methanol jets when the solenoids trigger at 10 PSI and then 12 PSI boost.

I also popped the headlight out to check that spray pattern on intercooler with the new water jets in. Looked good, pretty much gets the WHOLE surface in my intercooler. Also cleaned out a few 100 MPH bugs jammed up into the top end of the cooler.

Possible tomorrow I will have help to bleed my brakes and clutch.

Bleeding went ok, no air at all in brake system but with such a small master for the clutch, I missed getting it topped and it sucked air in so had to re-bleed. It had not been done in awhile anyhow so totally putting in can of fluid through was not a bad thing. I run a can through for both front and rear so the system is totally purged of old fluid. So nice to have those new bleeder nipples on the BMW calipers, NO wrench issues!

On thing did crop up to do with my methanol system which I will address in a future post, once I fully diagnose problem.

Tomorrow I will wax car, as I now have space in the garage all around the car..

I did re-stock my spark plugs with some new BPR8ES plugs and threw a fresh set into the car. I have 5's through to 9's. I always carry in car just in case and if anyone fouled a plug on any of our drives. The 5's in that box are really old, as they are not RESISTOR plugs.