ostaylor wrote: ↑31 Jan 2021 15:45 Stu - are you putting a switch in for the parking brake light? Would like to see how you are doing that. When my hand brake is on, it is very noticeable so unlikely I'll drive away with it on, but it's a nice enhancement regardless.

My parking brake has a built-in switch and I plan on just wiring the indicator light the same way it was in the dash; indicator light is powered and either grounded by the parking brake switch or the distribution block near the master cylinder if the balance of fluid pressure is incorrect.

You can see the wire and the plunger style switch below. Hey Stu, the dash console setup looks awesome! I'm actually getting the same lights for the SSS consoles as well. appreciate the kinds words too, and your patience along with the rest of the Datsun community. Last year to be honest was a complete shambles worldwide, but i got there in the end.

Thanks for the plug and links. I'll definitely take note of the additional cutouts for the locking rings and amend the design for future releases. Always be improving!

I'll add a new post for the SSS Dash as well for everyone's interest, be sure to check it out.

I don't know if all 510s come with separate keys for door and ignition, but mine did and it annoys me. Since I have all of the door/trunk/ignition locks out of the car, I took them to my local locksmith to see if there was something he could do about it.

The door key I got with the car was pretty chewed up, and I only got one door and one ignition key, so was very careful to not lose them. FIrst, he figured out that the door key was not the correct one for the code on the outside of the cylinders, and then he figured out that the ignition cylinder had already been replaced at some point since the dowel pin that retains the cylinder had been poorly dug out and replaced with a misaligned spring pin. The doors were an "X7" core and the ignition was an "X6" core. Once the correct door key was cut based on the cylinder key code (worked so much smoother), he found an X7 core that would fit in the ignition, and keyed it to match the doors/trunk. 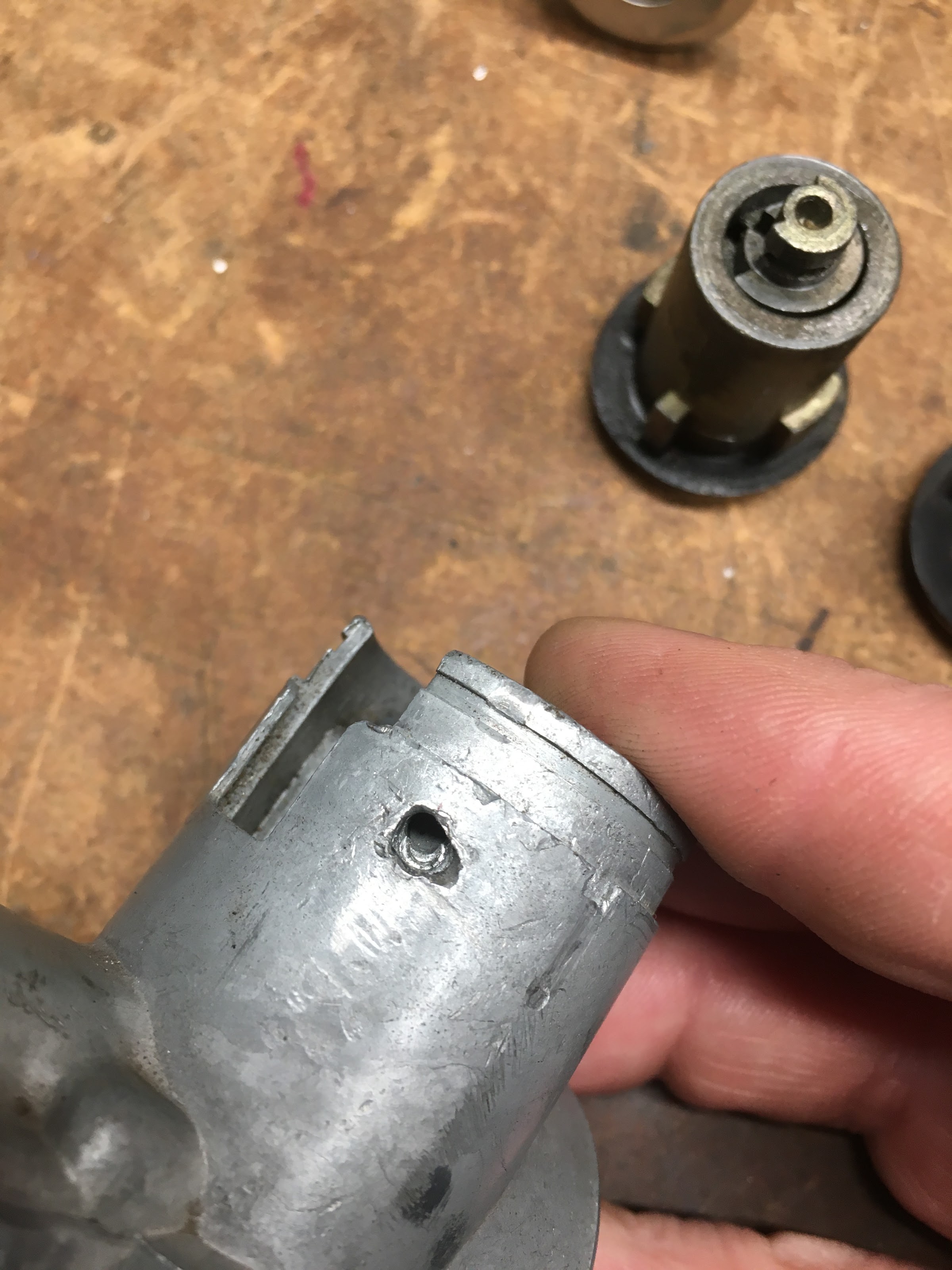 replaced spring pin with modified M5 set screw. Can't put a lot of load on the core or is binds. Screwed in enough to retain and used loctite. The outer trim ring surrounds this screw so it doesn't have anywhere to go even if it gets loose. 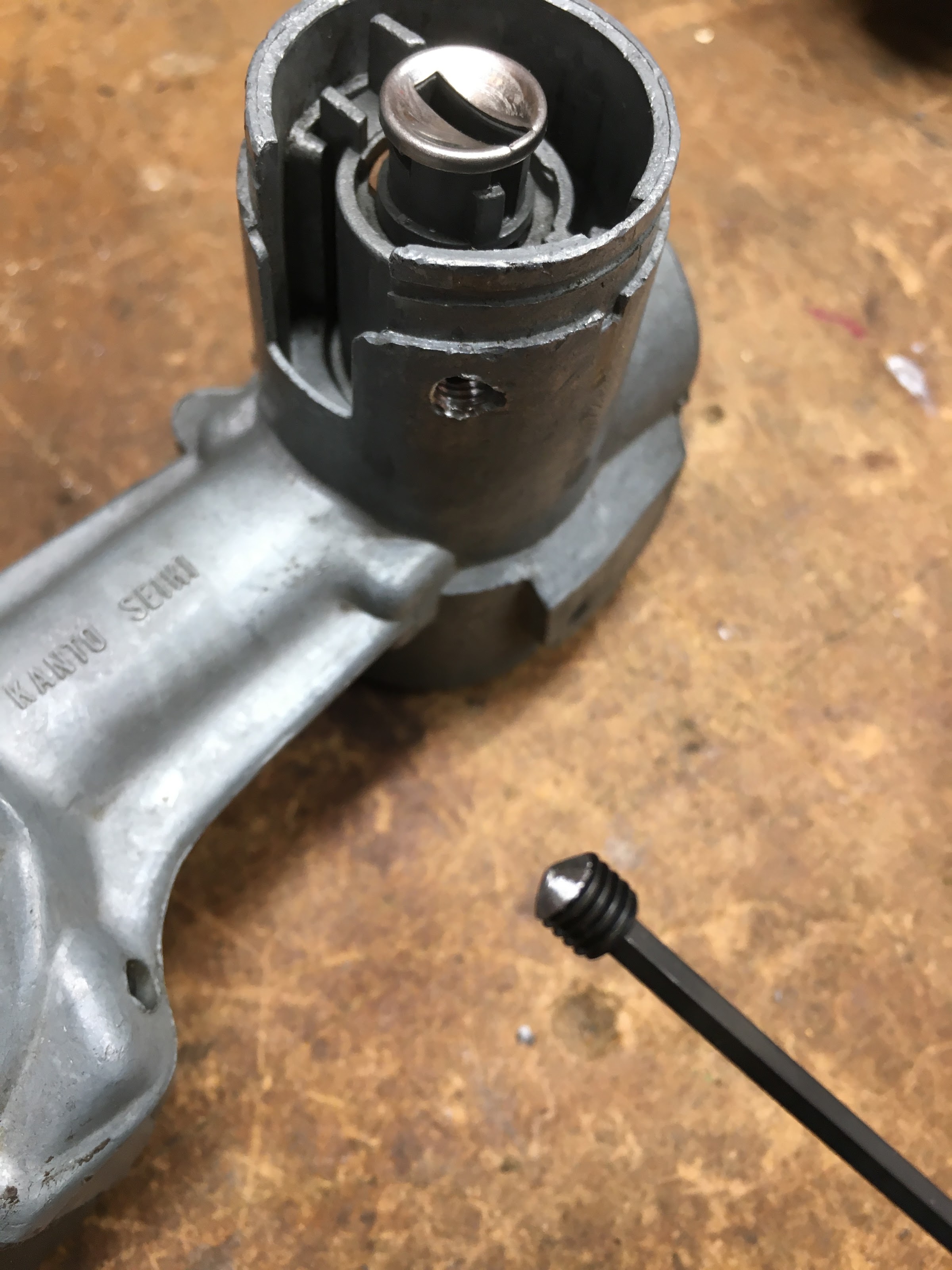 The chrome ring with the lettering was crusty so I soaked in Evaporust, polished it, then used paint to fill in the letters then wipe on a flat shop towel. Blasted and painted the outer trim ring matte black. 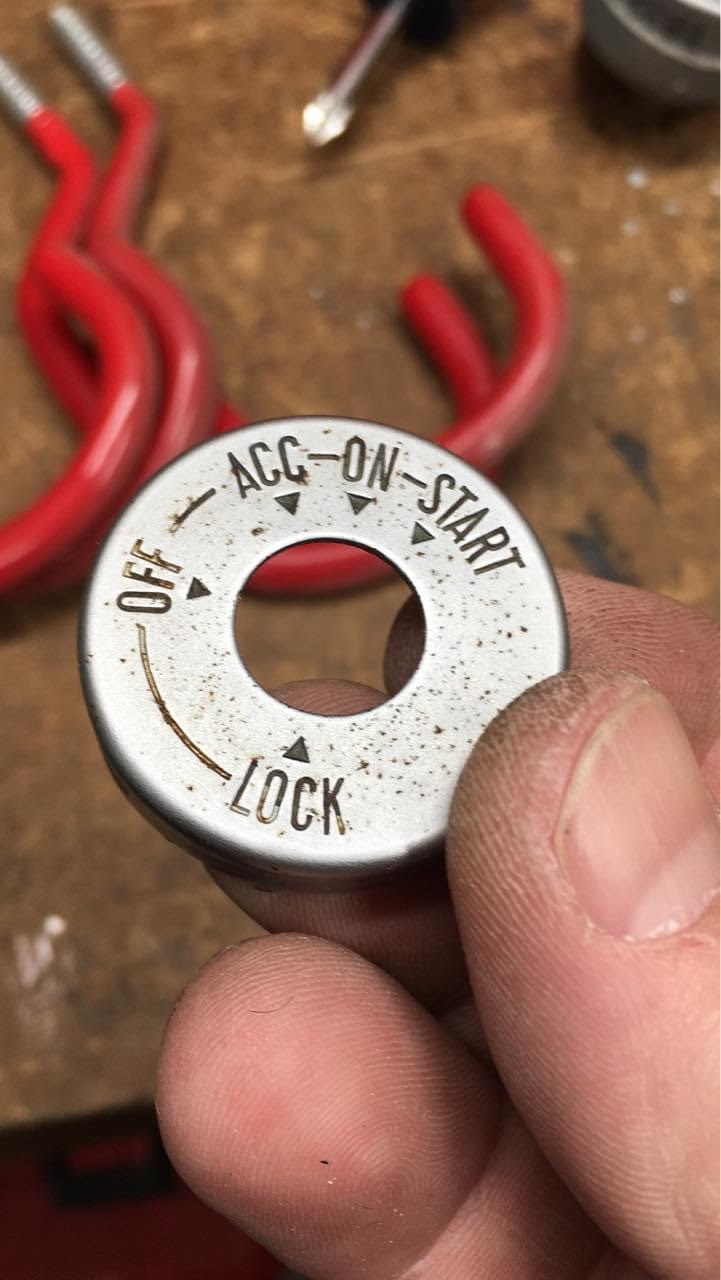 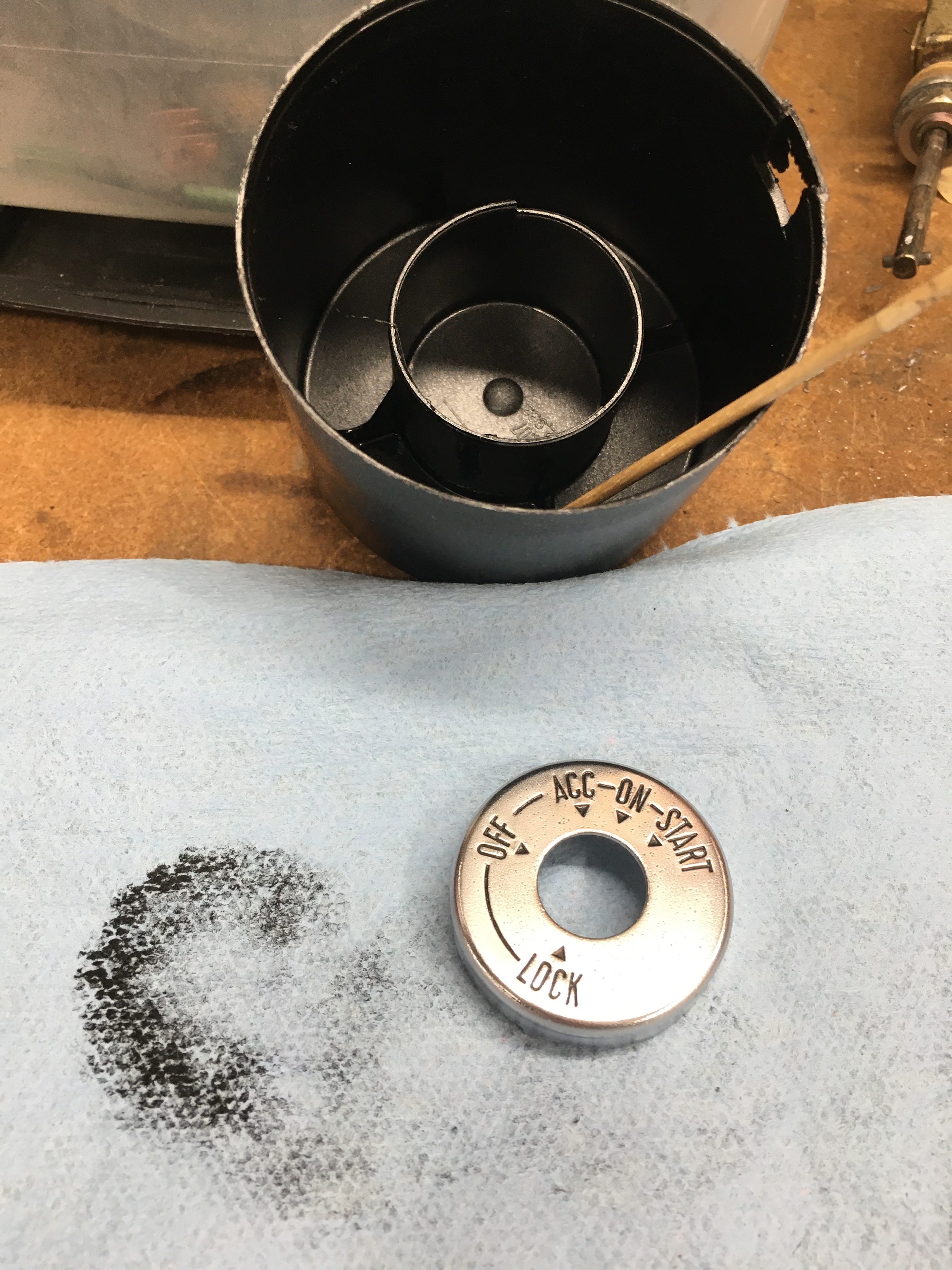 Now I only need one key. I'm not deluding myself that a 5 year old can't start a 510 with a screwdriver. These are not super hard cars to get into...
Stu

Nice work. The ring with the lettering turned out great! Mine could use a similar treatment. Thanks for the explanation of how you did it.
The company motto seems to be "We're not happy 'till you're not happy."
Top

That center gauge console looks really good! I like those little indicator lights and how they match the screws for the gauge face plate. Also great info on that wiper switch/motor, although it did hurt my brain a little to read it haha.
Chris
'71 510 4-Door Sedan
'76 280z
Top

WxMan wrote: ↑07 Feb 2021 20:47 Nice work. The ring with the lettering turned out great! Mine could use a similar treatment. Thanks for the explanation of how you did it.

Thanks. I like to spray paint into the cap, let it evaporate a bit to thicken up, then it can fill the letters better using a wood end of a cotton swab. Only wipe on the paper shop towel a of couple times so it does not pull the paint out. Recoat a few times after each coat dries and it fills in well.


cwd240z wrote: ↑09 Feb 2021 11:21 That center gauge console looks really good! I like those little indicator lights and how they match the screws for the gauge face plate. Also great info on that wiper switch/motor, although it did hurt my brain a little to read it haha.

The wiper delay wiring made my brain hurt too. I'll probably only use it once a year, if that.

I wish I had a factory ignition switch like that. Mine is after market and upside down

My trim ring with the lettering just snaps on. There are two tabs that let it rotate 180 degrees. You might check to see if yours can just be rotated and snapped back on.
Stu

Reseal and Rattle Can Rebuild of S15 SR20DE, The End(ish)

Certain parts on the S15 RWD SR20DE are specific, like plug wires, and not readily available in the US. I ordered a bunch of OEM parts from Olympia Nissan (https://www.nissanparts.cc) as they carry quite a bit of JDM parts and are 'close' to me so shipping is reasonable.

I ended up buying the 'wrong' distributor cap (Nissan 22162-70F11) which is for a KA. It functions exactly the same, but the cylinder numbers on the cap are incorrect for the SR20DE. I should have bought (and will next time) Nissan 22162-0M811. 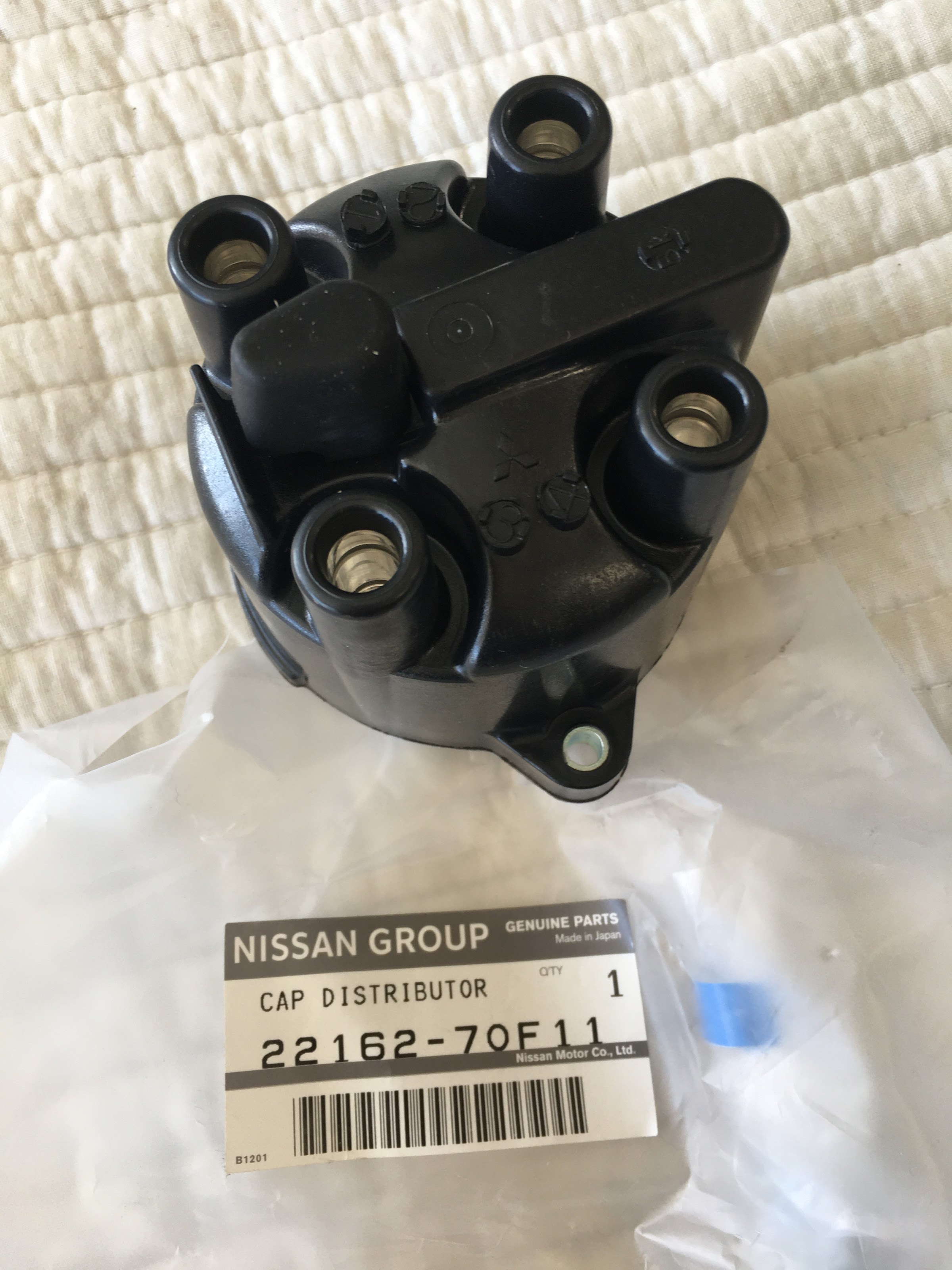 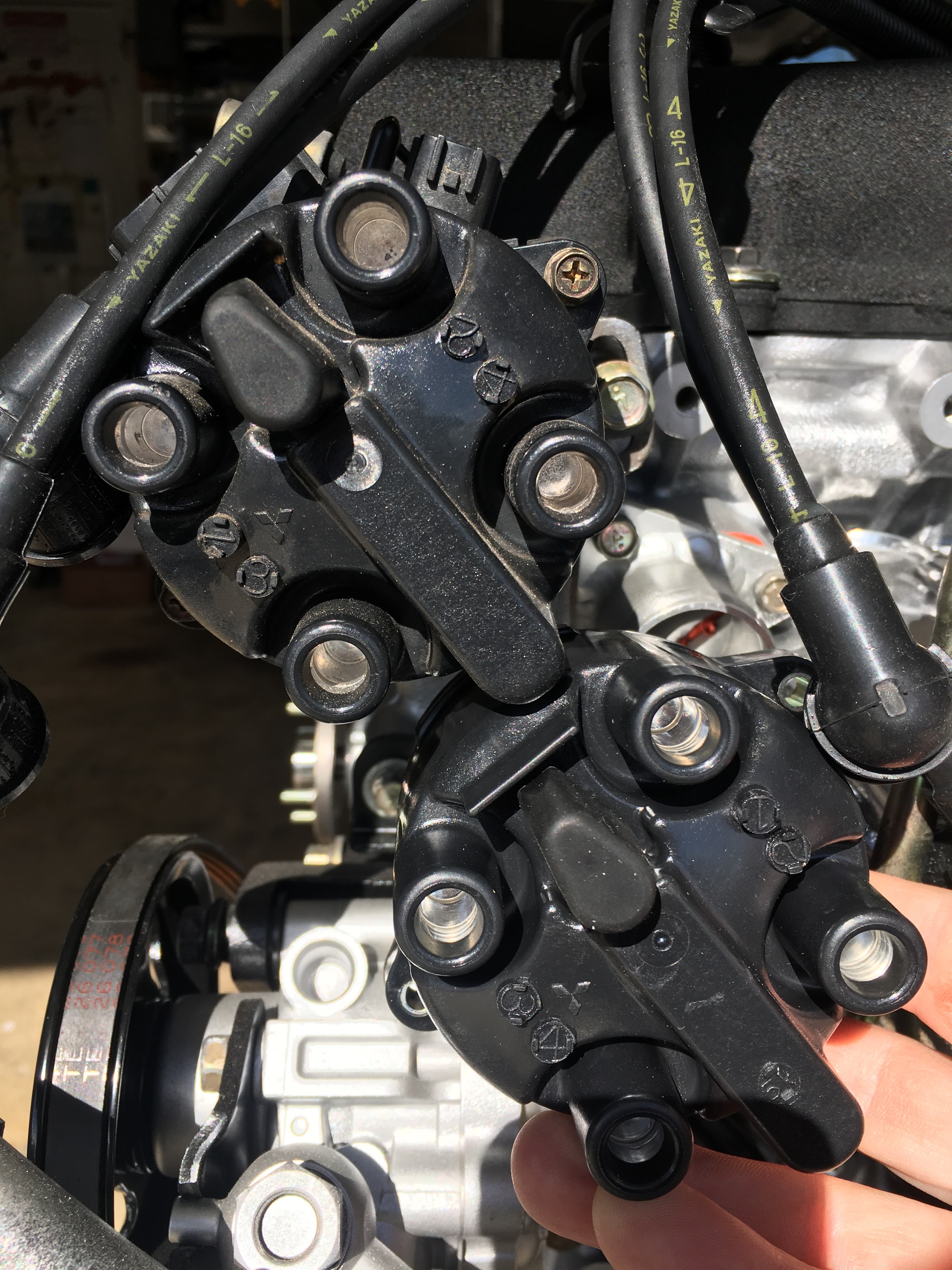 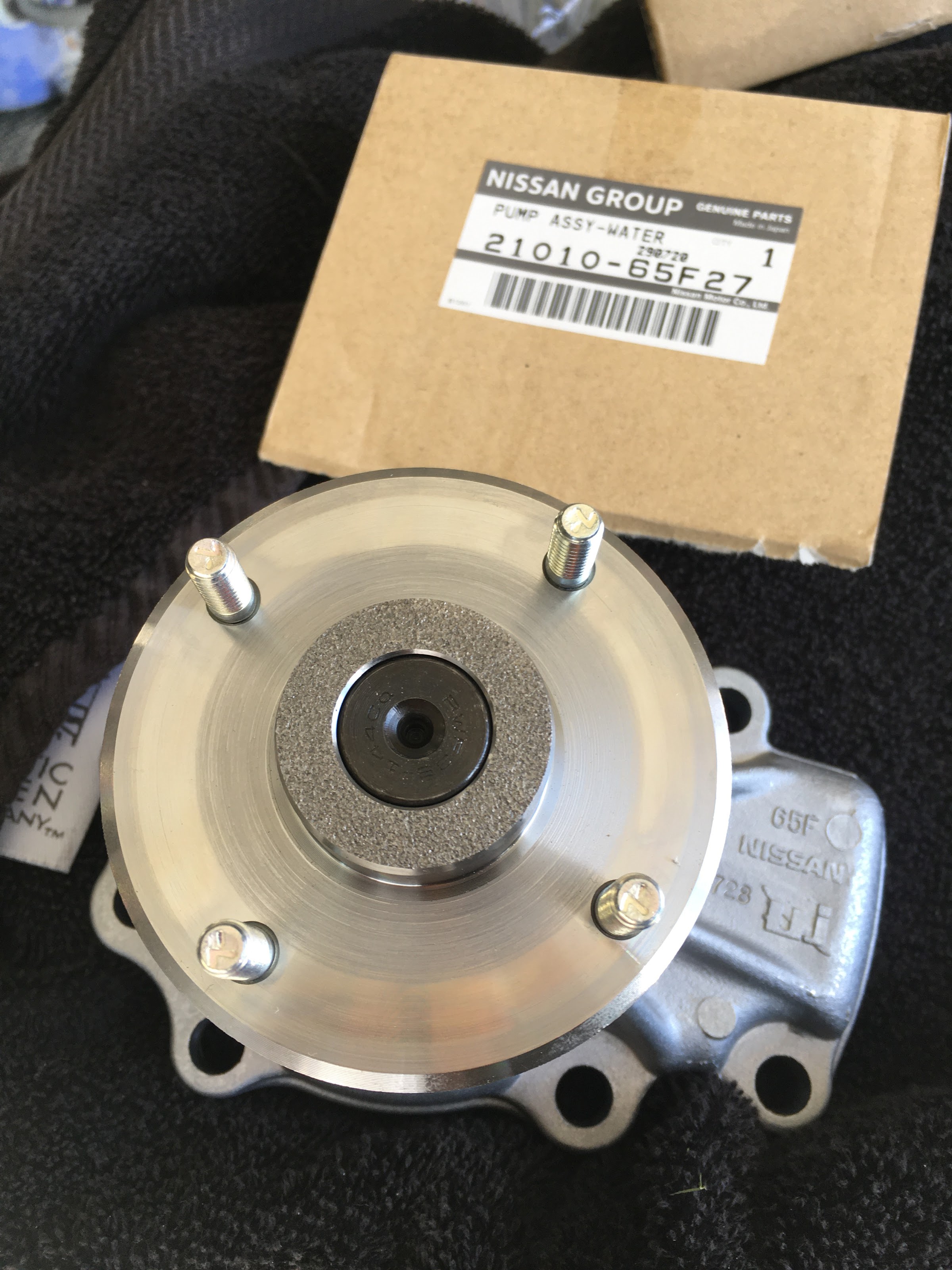 The alternator on my engine was super crusty and the bearings sounded terrible. One from Japan was stupid expensive so I converted to the 2001 Nissan Quest 125A alternator using the Cody Ace alternator kit. I could have made this 'kit', but felt like supporting the car community. 125A might seem like overkill, but I am running EFI, electric fuel pump, seat heaters, rear defrost, stereo amp, etc and don't want to have a weak electrical system when everything is on. 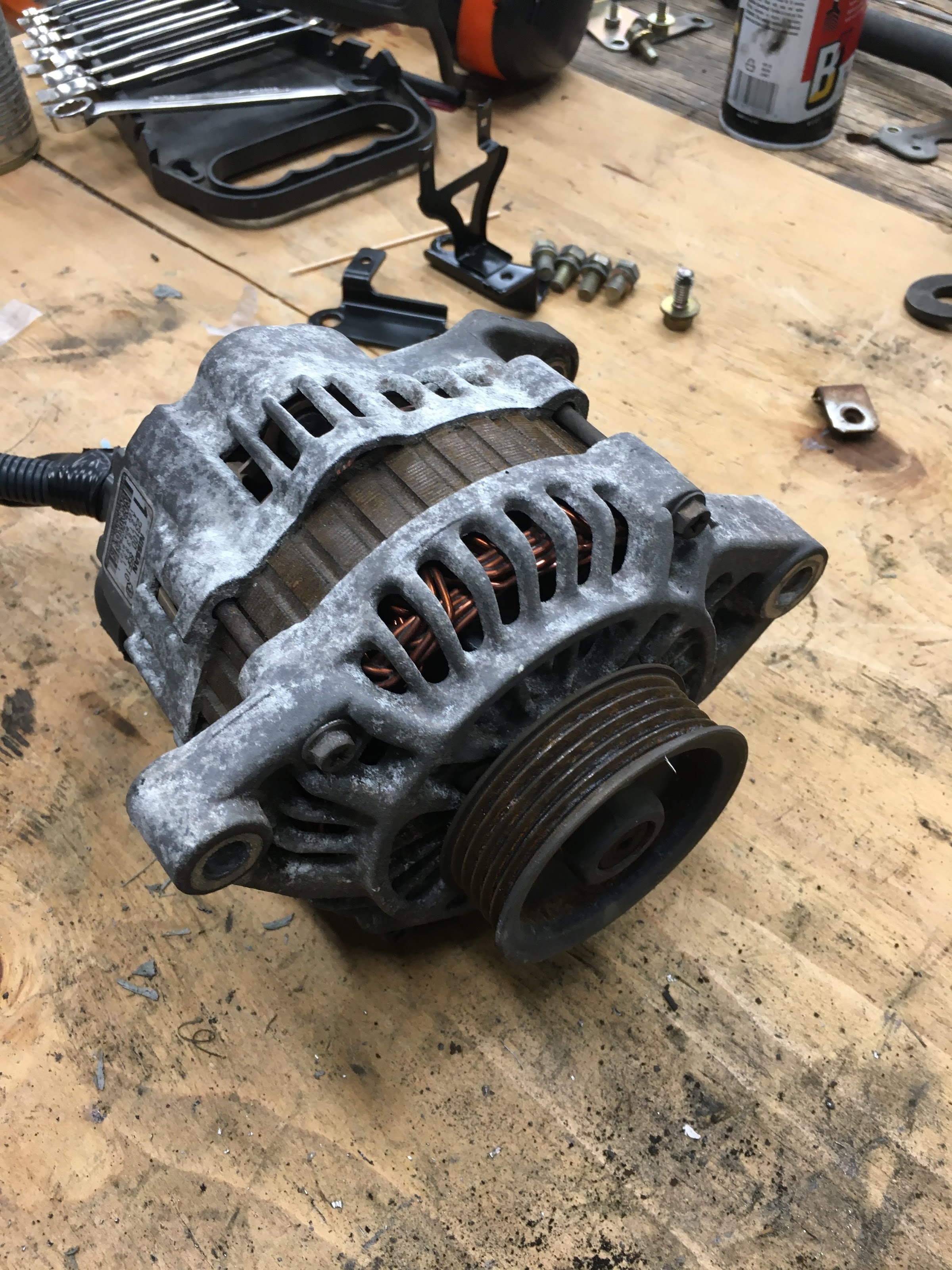 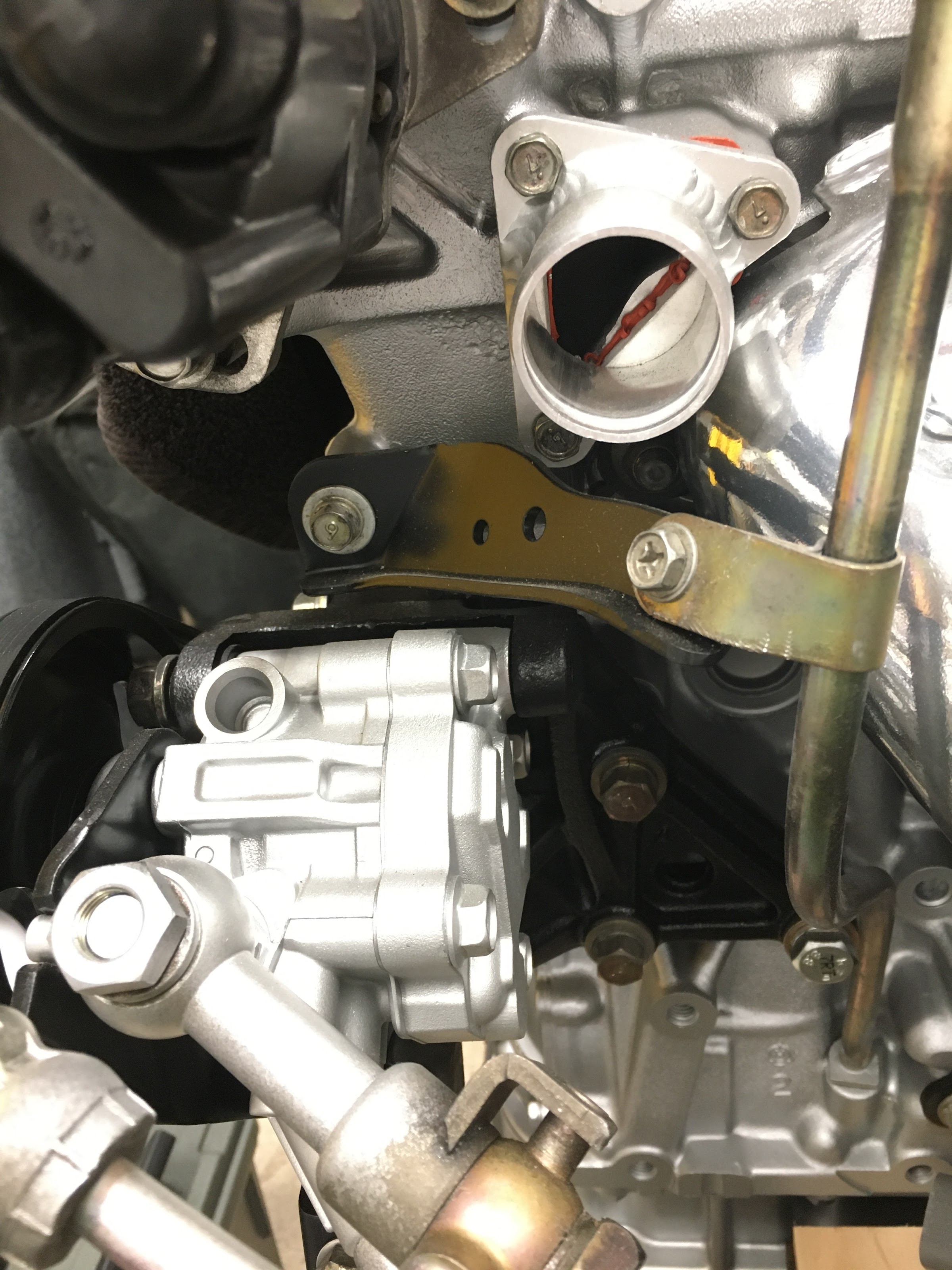 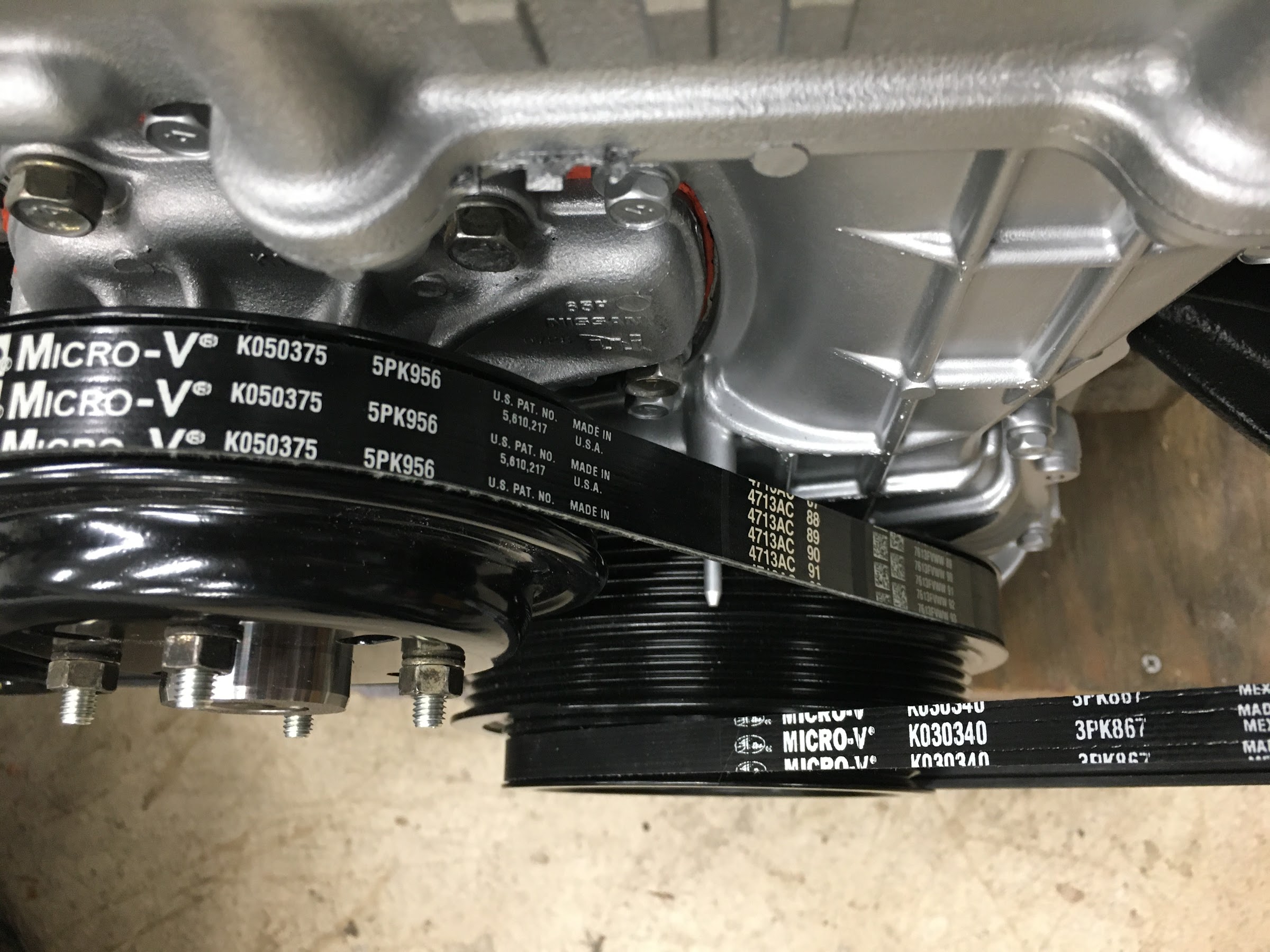 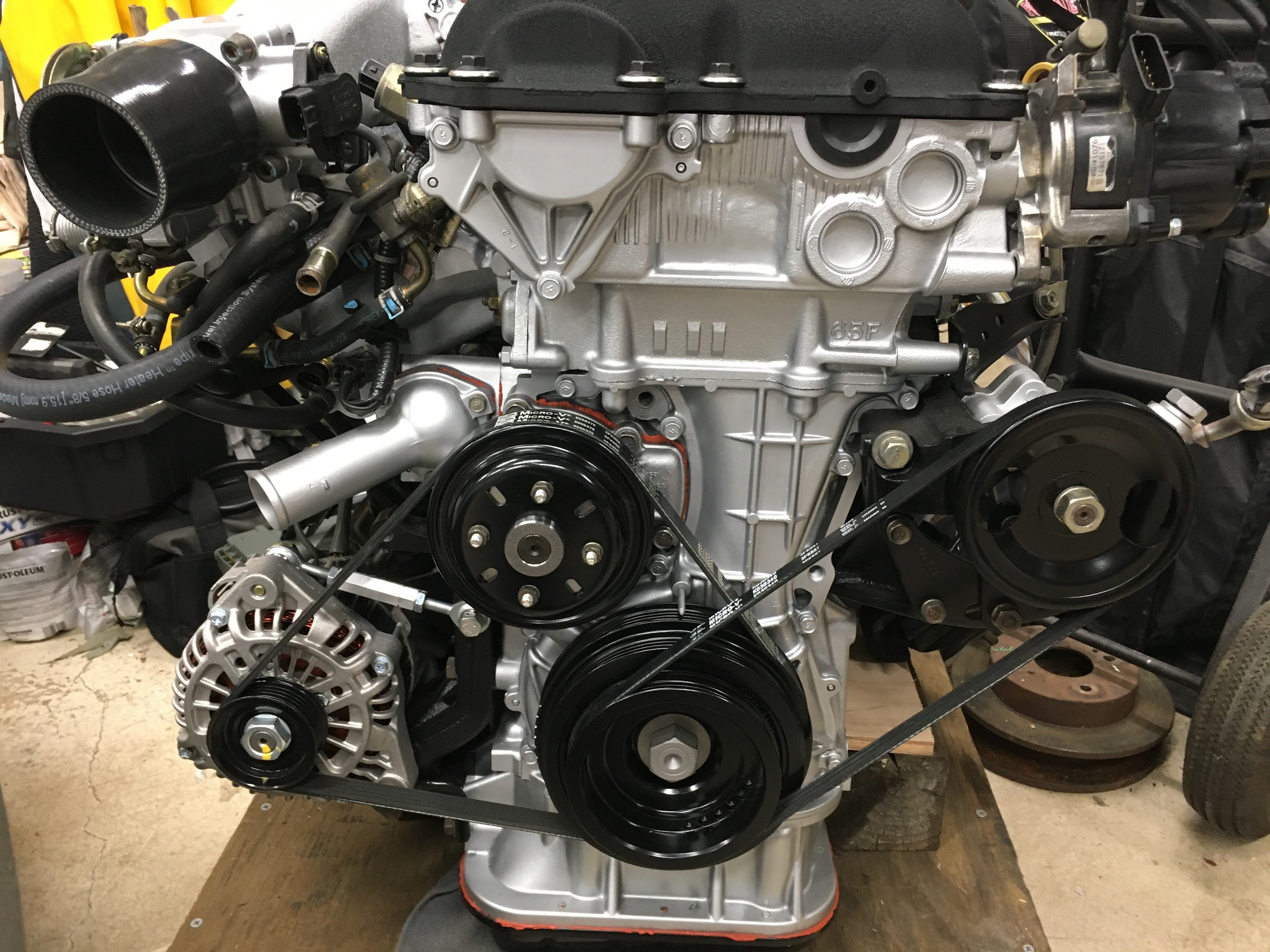 Re: Wiper mechanism rebuild and Acura Integra wiper in Datsun 510

Stu wrote: ↑15 Jan 2021 21:25 My wiper mechanism on my car was all gunked up and one of the pivots was completely frozen. Since I live in the Pacific NW, functioning wipers are a requirement. Thanks to fellow realm member, Spriso, a replacement pivot was acquired to save my bacon.

Everything taken apart and cleaned. 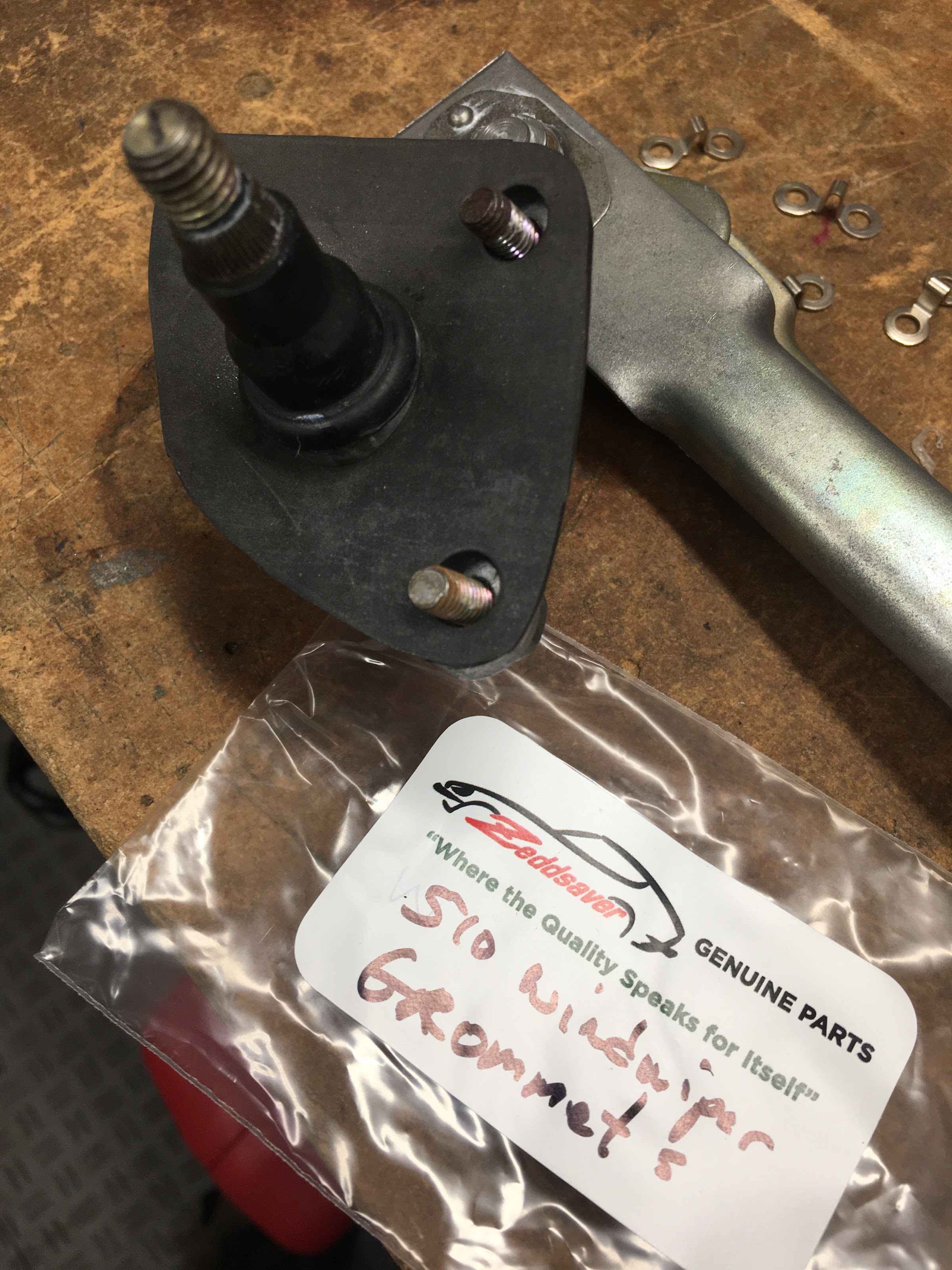 Hey Stu, did you reuse the original clips for both the linkage arms and the wiper pivot shaft retention (looks like they are on the bench there). I just took mine apart yesterday to rebuild/lube etc., and the clips holding the linkage seemed to spread a little. Looks like they could be replaced with standard e-clips of the correct size. The clips holding in the pivot shafts are a different type, but I think mine may be reusable.

I did reuse them. They spread a bit but I just gave them a light pinch with some pliers. I'm sure they could be replaced with C or E clips, but since mine seemed OK, I did not dig into that. I think I might send the mechanism out for yellow zinc plating so would have to disassemble again. The rings on the pivot shaft look very application specific though.

If you find a C/E clip that works, let me know.
Stu

At some point my car got hit in the right rear corner and it buckled the trunk floor right at the front of the spare wheel well, closed the right rear door gap, and wrinkled other bits and pieces. They then poorly scabbed on a replacement right rear quarter, pounded out some dents, spread on a nice thick layer of body filler on the rest, and put a extra crappy paint job on it. Before I start replacing and repairing panels, I wanted to get as much of the body in the correct place as possible.

There is a local frame that was willing to deal with my odd piece of car shaped sheetmetal and actually discussed how they would pull on the car. 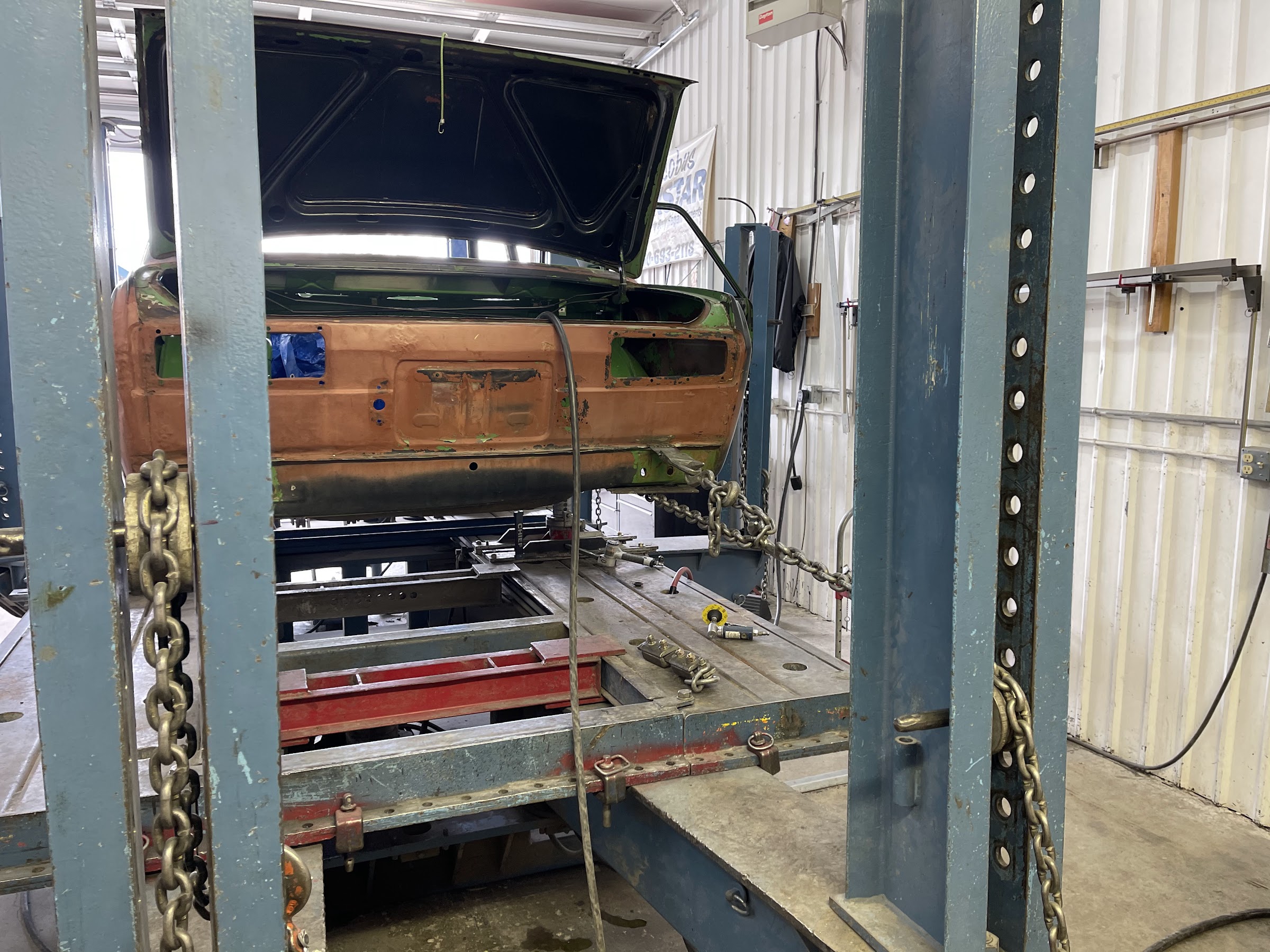 The rear corner needed to be move about 1/2" back and outward to get everything square. The tech fixed wrinkles in the wheel wells and got the trunk floor much flatter. Most of the damaged area is behind the fuel tank but it looks much better than when I brought it in. The rear door gap is much better too. They also verified the rest of the car is square and straight. 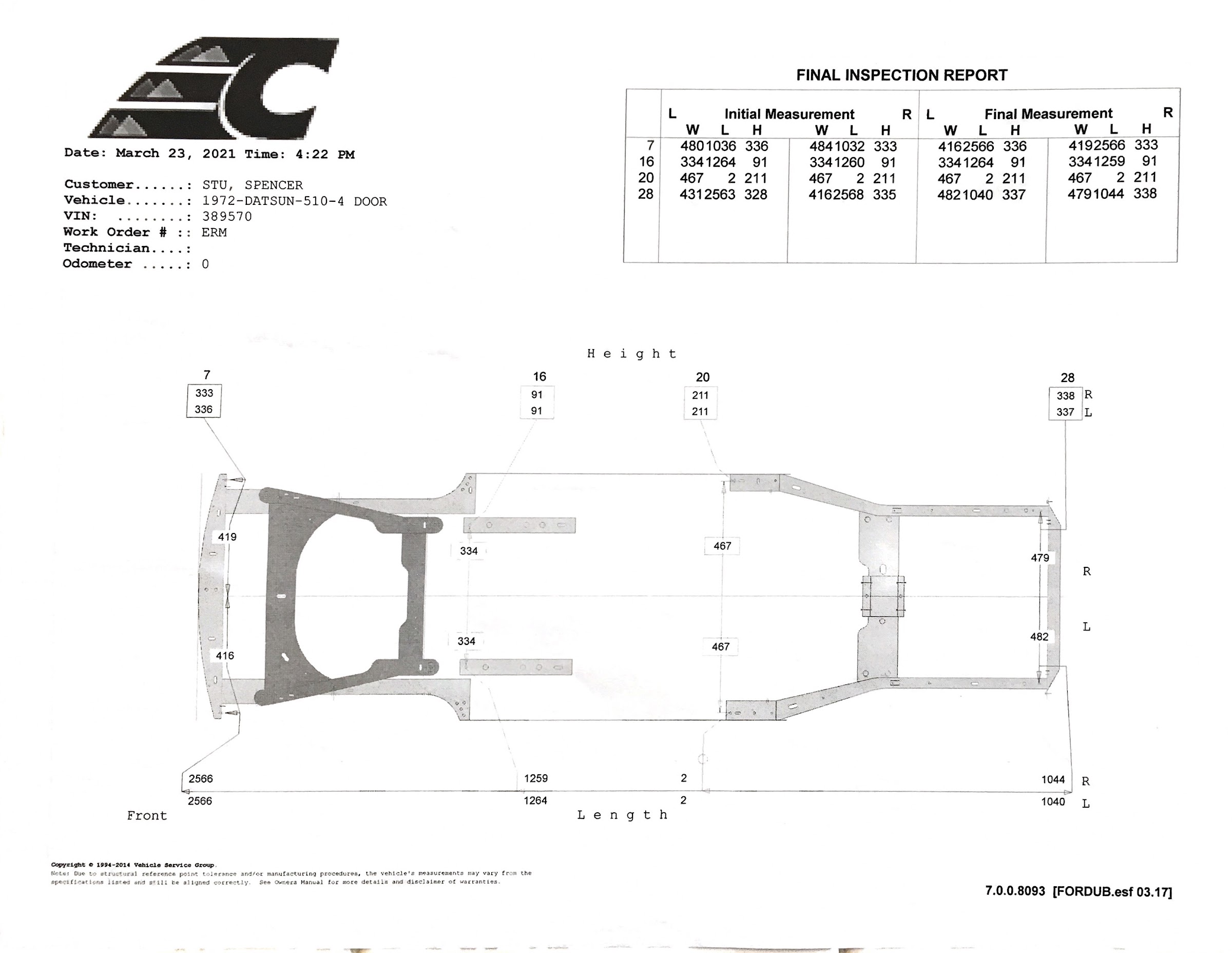 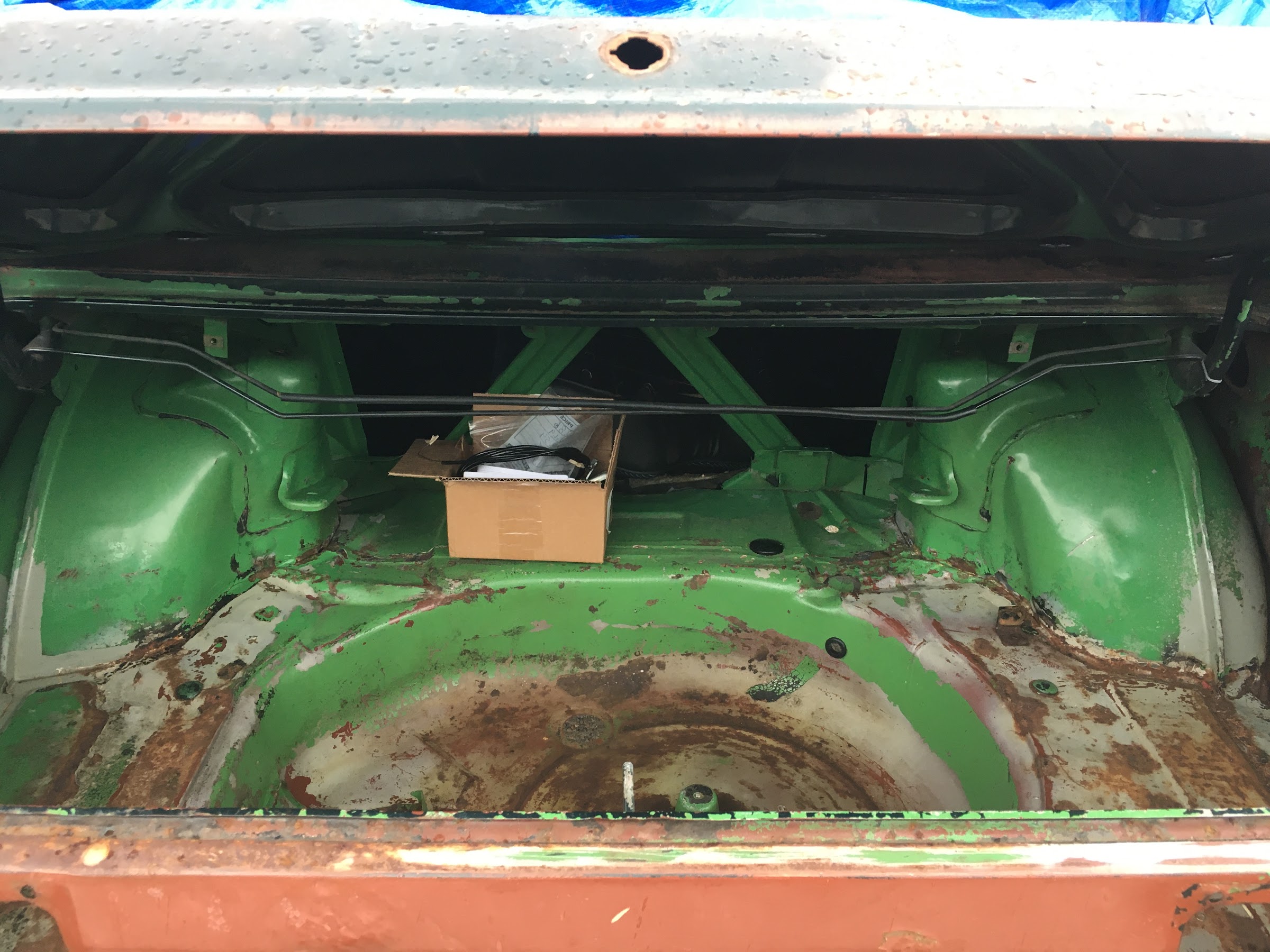 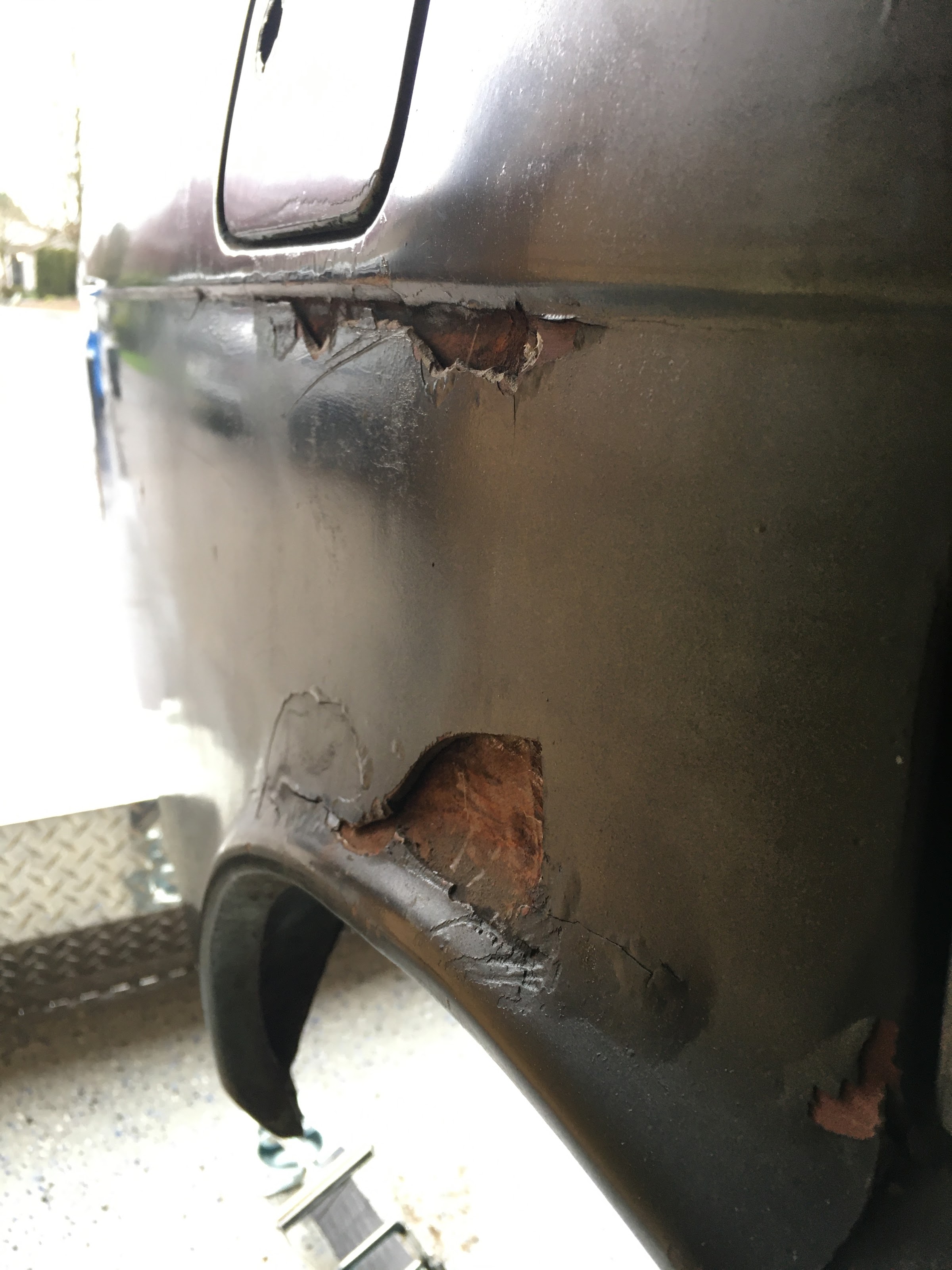