I'm in the process of getting my engine bay put back together & I've run into a few wiring hiccups. My memory really sucks so that's not helping matters, either. I believe I bought a replacement alternator because the original one was not rebuildable, so I'm wondering if that's why some things aren't "falling into place". It's perhaps internally regulated? I have a Haynes manual with a wiring diagram that I've been following but I've got a few questions.

In one of the photos, you'll see 2 black wires with ring terminals on them. I put them back where they came from (according to photos I took before I took everything apart). Is that the correct place?

I have a "stray" white wire, which I think is 12ga. It has a male spade terminal on it inside a connector. I'm not clear on where that goes.
(The red wire with the blue tag on it is actually the white/red wire.)

I don't seem to have a ground wire for the "E" terminal of the alternator. Is one of the fat, black ring terminal wires supposed to go here? It'd have to be lengthened, of course, but maybe the different alternator is the cause? 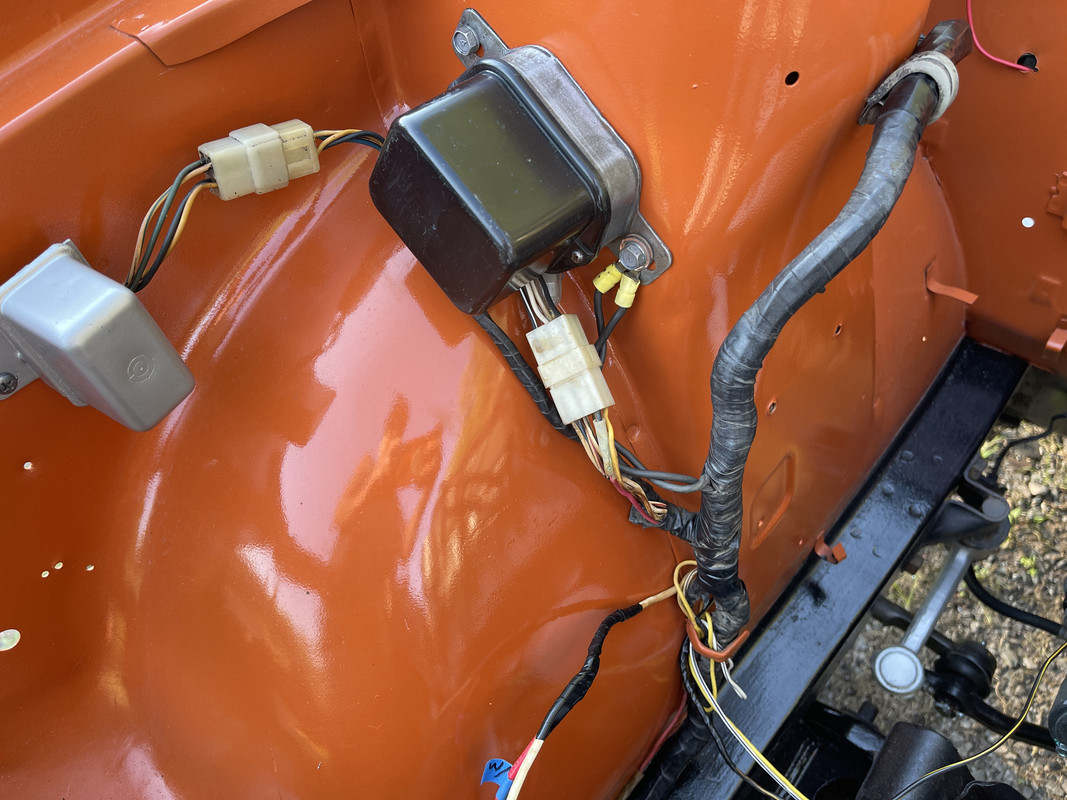 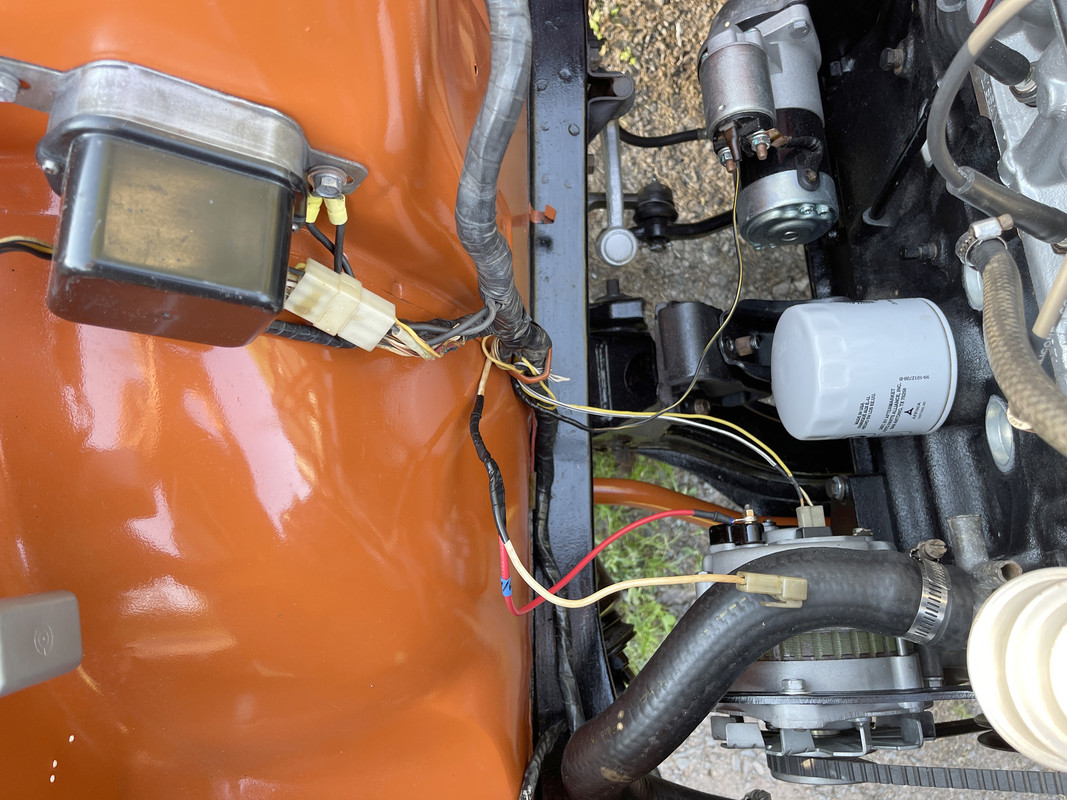 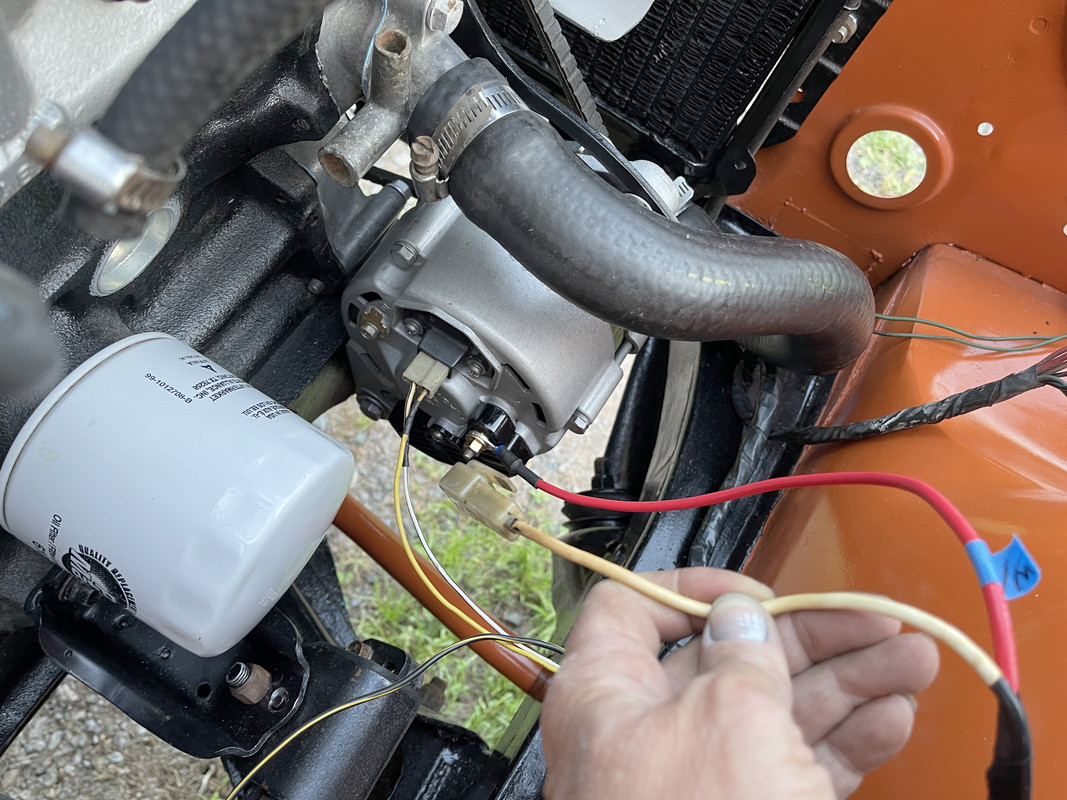 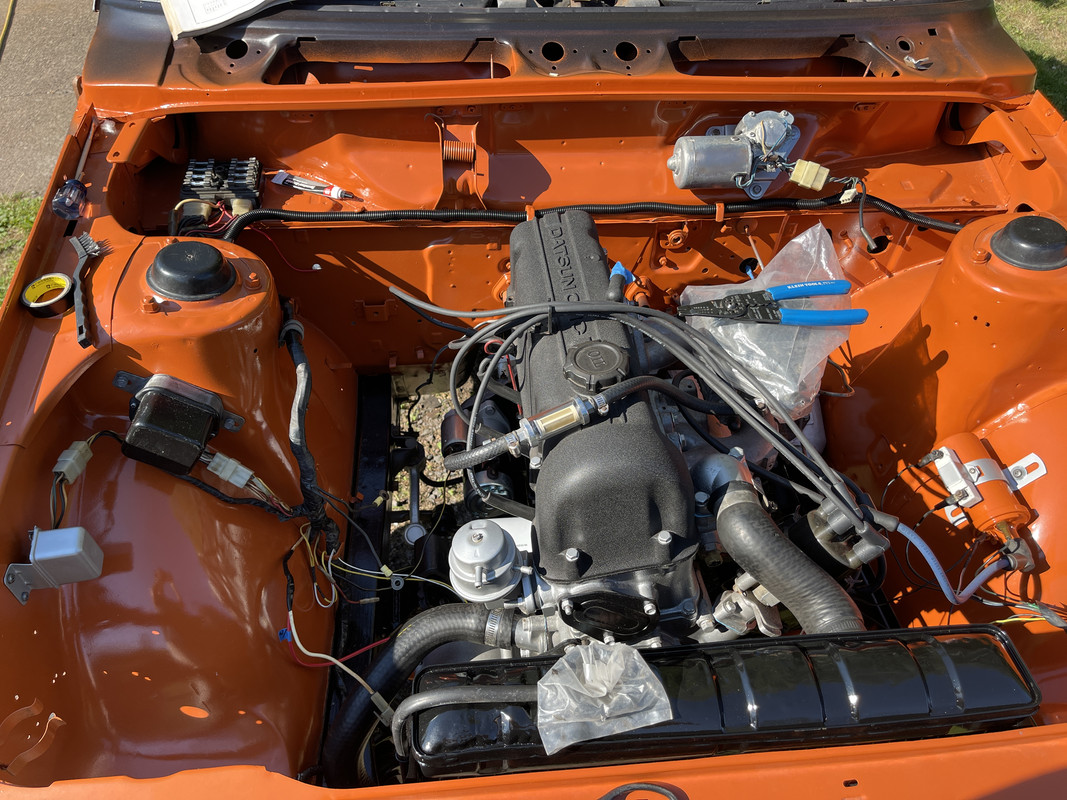 Thanks for any guidance, guys!
Top

I'm not sure about the rest but that red wire going to the + on the alternator seems pretty small that will be running the whole car. Something that small will be asking for a melted wire.
If no one from the future comes back to stop you from doing it then how bad of a decision can it really be?
Top

funwithmonkeys wrote: ↑04 Aug 2022 21:27 I'm not sure about the rest but that red wire going to the + on the alternator seems pretty small that will be running the whole car. Something that small will be asking for a melted wire.

I used the same gauge that was there stock (white with red). The white/red wire that I replaced and the white one come together with a factory(?) crimp under the electrical tape. I soldered to a small section of the original wire to keep a "reminder" of the original color/gauge & resealed it. I suppose I can resolder in a slightly larger wire but it's fed with the same gauge as the red one so I'm not sure that'd create less resistance. If I'm incorrect, please let me know. I definitely don't want a meltdown.

Excellent! Thanks! I didn't come across one in my boxes of parts. Is it an odd Datsun thing or is it just a regular ol' fusible link? Also, do you know what size it is? It may say in my book somewhere but it's in the garage & there's a bear in my yard.

Here's a picture of a link. But last time I checked it was nla from the Canadian dealer's. But easy to buy the wire and crimp on the connectors.

Also, on the topic of wiring, our 510's like GOOD grounds! WE also run a small, flexible battery ground wire from the starter bolt on the trans housing to the idler arm bolt, that really helps the engine be grounded.
"Racing makes heroin addiction look like a vague wish for something salty" - Peter Egan

Also get rid of that fuel filter before it burns your car down.
"People don't like it when shit doesn't match their rule of thumb." Sam
Top

Got it, Icehouse, I'll dump the filter, it's been on the car forever. I didn't know it was unsafe.

I'll do the same then, Keith. Thanks for the tip!

MikeY, that pic helped. I dug through my boxes again and came up with these. They were connected together. The white wire plugs into one but it doesn't have a ring on the other end like yours. Are these fusible links or some random adapter? The wire is green, if that means anything. 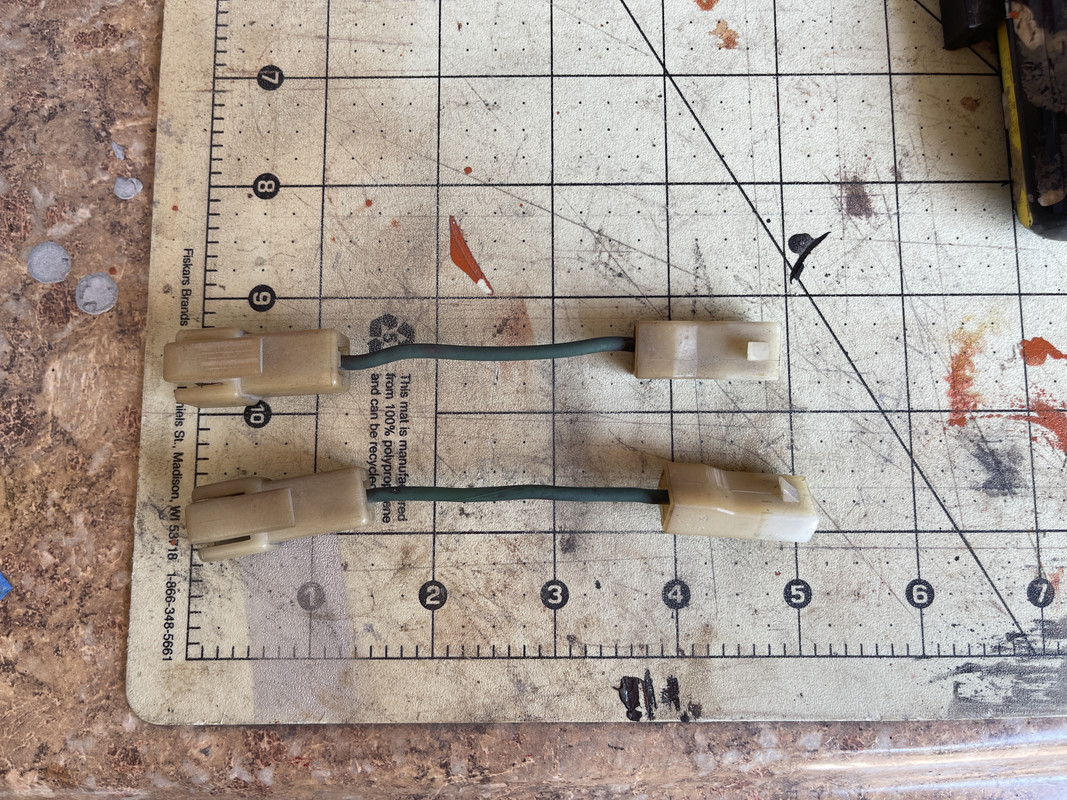 Those sure look like fusable links. I also found one like that digging up the other. I just can't place where I've see those go. I suppose you could make a pigtail with a ring and run one of those. At worst is blows because it's too small. The white wire just goes to the fuse box. All the circuits are still protected by it. Green sounds familiar.
Top

While your into electrical. Soak the fuse box in a 50/50 white vinegar mix. About an hour. I use a toothbrush to scrub the fuse holders. Then rinse in hot water and dry it best you can. It really help clean contacts. I've seen many gremlins disappear with this trick.
Top

Also, while we are looking at that side of the motor...what oil sender/gauge are you going to use? I do not see the factory low oil pressure sender there.

In no case at all, use one of those little clear plastic line gauges ( the British loved those), as that too is a recipe for disaster.

I personally have seen 3 failures with those damn things.
"Racing makes heroin addiction look like a vague wish for something salty" - Peter Egan

I think the vinegar soak is a great method but I haven't been able to remove the fusebox. The 2 screws are totally seized. I've had them soaking in JB-80 for a couple of days in hopes of getting them out but I doubt I'll have any luck.

I've always had an SW oil gauge with the clear tube. Yet another thing I had no idea was bad. Yikes. What is a better alternative? I'd really hate to puke my new engine.

About the fusible link, since I wasn't positive the connectors I found were indeed fusible links, I didn't want to cut one up only to find out later they're for something else on the car and/or find out they aren't the right wire for the job. So, I just made one; it's about the same length as the wire thingies I'm not sure about The wire is supposed to be for 60A, according to the parts guy (for what that's worth...). 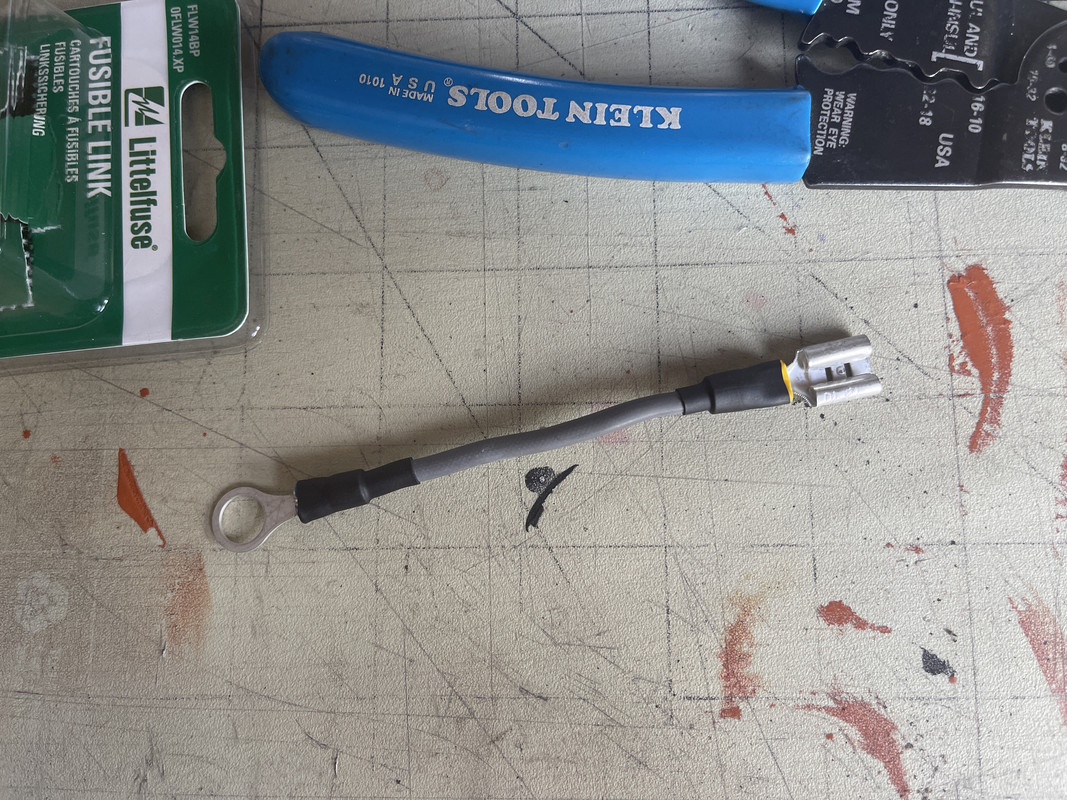 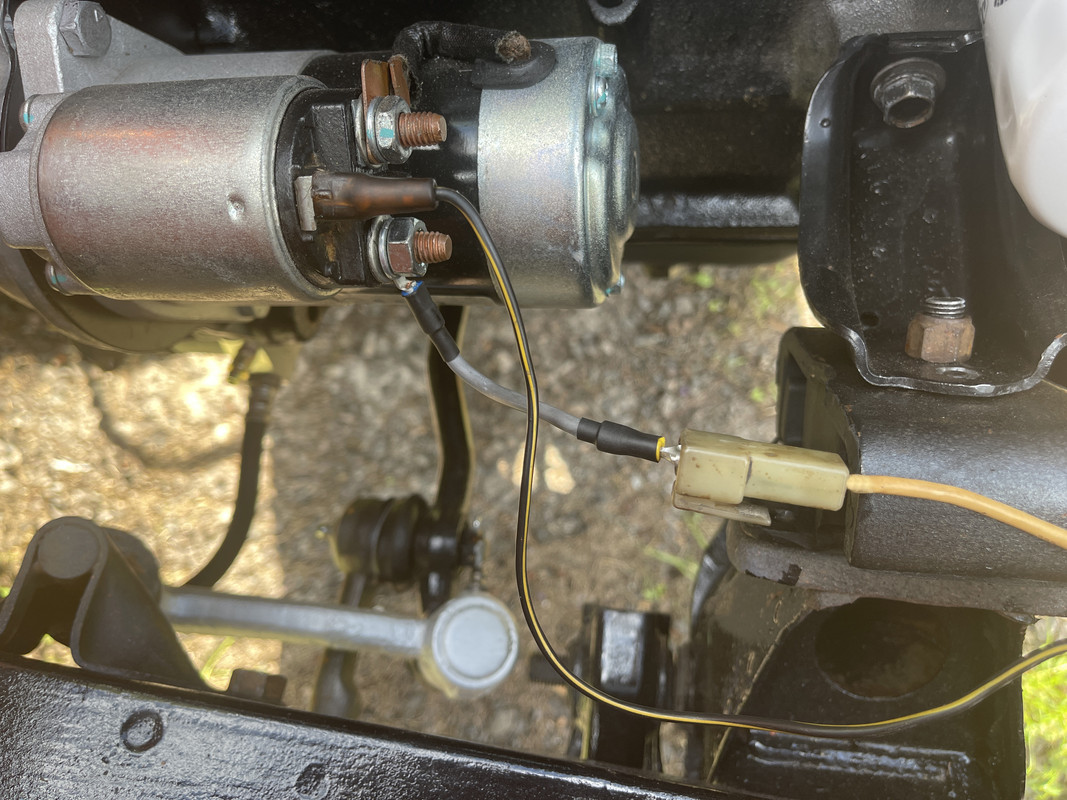 Thanks again, guys. I really appreciate the input.
Top

Nice. I will suggest you can get those larger size fusible link connectors from Vintage Connections.

I just checked my harness and can confirm the picture Mike Y provided is accurate, It is red with an 8mm ring terminal, and is about 5" long overall.
Top

Excellent! I'll have a look. Thanks!
Top
Post Reply
21 posts